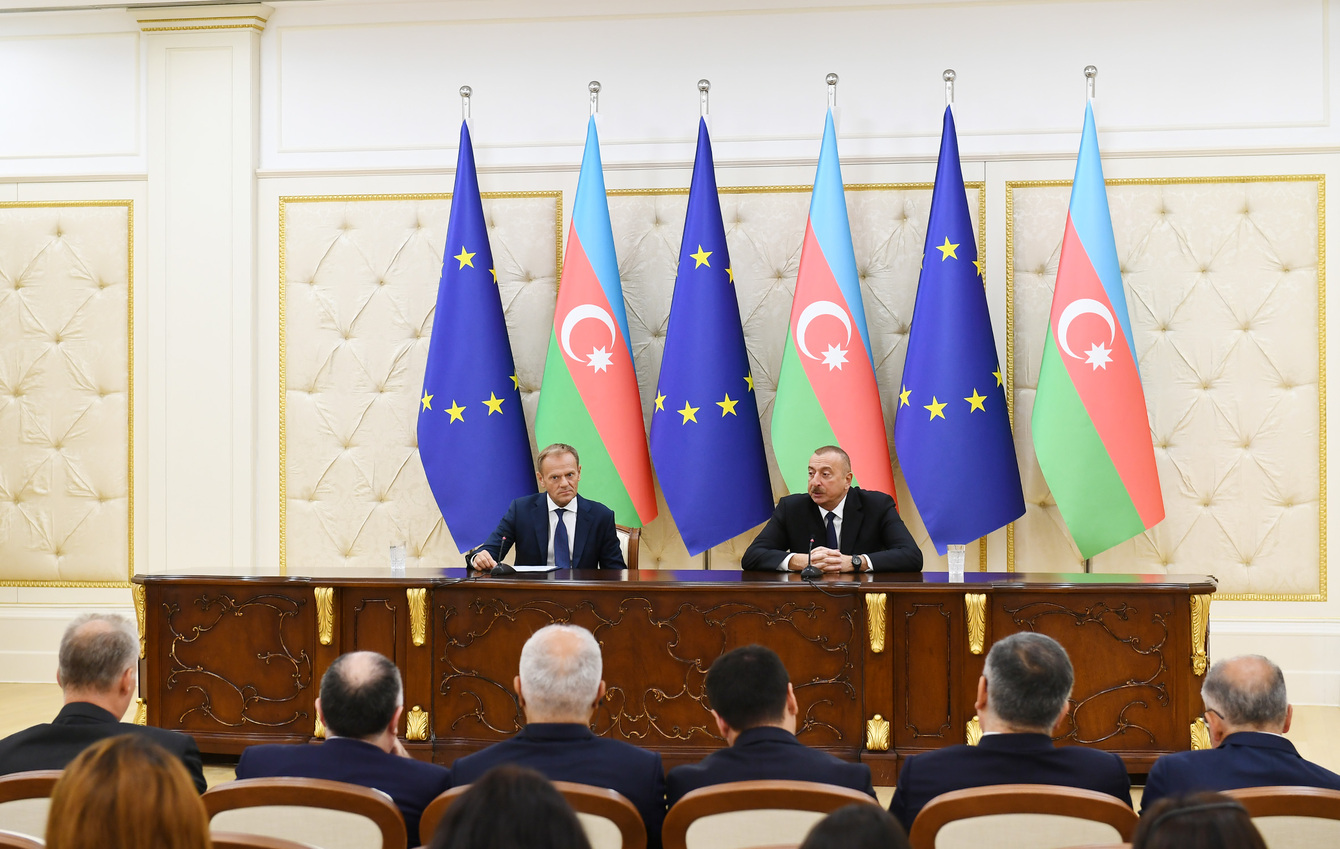 European Council President Donald Tusk arrived in Azerbaijan on Tuesday to discuss with the central government in Baku what the European Union and Azerbaijan have so far delivered on, with regards to the commitments the two sides signed onto under “Partnership Priorities” one year ago.

In a joint press conference with Tusk, Azerbaijan’s President Ilham Aliyev praised the positive dynamics of the EU-Azerbaijani relationship, including regional development and security.

“Relations between the European Union and Azerbaijan are based on a partnership spirit and mutual support,” President Aliyev said, according to the president’s official website. “Today, we have also discussed energy security, transport sector issues. Azerbaijan and the European Union are cooperating very constructively in these areas. The Southern Gas Corridor project is being successfully implemented.”

Tusk emphasized the importance of the Southern Gas Corridor – the multi-segmented natural gas pipeline that will start powering more than 10 million European homes next year, with gas from underneath the Caspian Sea.

“Of course, we should not forget the Southern Gas Corridor, which connects us in every sense of the word. This positive momentum should raise our partnership to a higher level, be beneficial to all our peoples, [and] to accompany the process of reforms and economic diversification of Azerbaijan.”

The corridor has been the focal point of the EU-Azerbaijan partnership for the past several years, as Europe looks to diversify its energy supplies. The Shah Deniz gas field, which lies in Azerbaijan’s sector of the Caspian, is the sole supplier that will feed into the corridor, at least for now.

The EU-Azerbaijan Partnership Priorities for 2018-2020, a document that was signed during President Aliyev’s visit to Brussels in July last year, guides the bilateral agenda and defines the Southern Gas Corridor as the main pillar of efficient energy cooperation between the 27-member European Union and Azerbaijan.

The corridor will deliver 10 billion cubic meters (bcm) of Caspian gas annually to Europe, and another six bcm to Turkey. The three-segmented route passes through the South Caucuses, Turkey and southwestern Europe, before ending in Italy. The Trans Adriatic Pipeline (TAP) – the corridor’s final segment that ends in Italy – is nearly 90 percent complete. In 2018, the European Bank for Reconstruction and Development and the European Investment Bank each allocated loans worth over € 1 billion ($1.12 billion) to TAP, the cost of which is estimated at €4.5 billion ($5.05 billion).

The 1,850 km (1,150 mi.) Trans-Anatolian Pipeline (TANAP), which passes through the entire length of Turkey from east to west, will be welded to TAP at the Turkish-Greek border. Turkey has so far received around two bcm of gas through TANAP since commercial deliveries began in June of 2018. Annual purchase of the country from SGC is six bcm.

While the Southern Gas Corridor will help meet Europe’s growing energy demands, it will provide a fraction of the continent’s needs. The overall inland gas demand of the EU stood at roughly 477 bcm in 2017, according to data provided by Statista.

The EU’s Commissioner for Budget and Human Resources Günther Oettinger said at the fifth Southern Gas Corridor Advisory Council meeting in Baku in February that the EU is interested in getting even more gas from SGC than the initial 10 bcm per year that is already scheduled.

“In the next 10 years, there are plans to double the volume of gas supplied to Europe via the SGC to 20-25 billion cubic meters,” Oettinger said according to Euractiv.com. He added that EU officials are looking to get the Balkan nations plugged into the corridor, considering the annual decrease in supplies as the Netherland’s phases out domestic production.