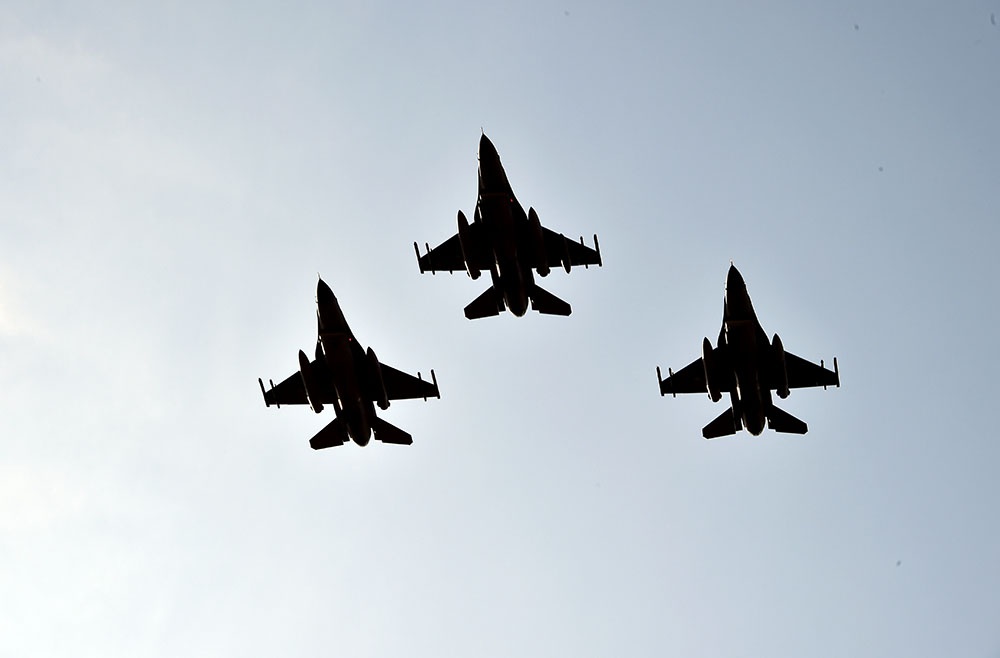 The Defense Ministry of Azerbaijan reported a serviceman's death and the destruction of an Armenian reconnaissance drone after it violated Azerbaijani airspace.

"On September 20, at 23.13, the Air Defense Units of Azerbaijan have destroyed a tactical unmanned aerial vehicle (UAV) of the units of the Armenian armed forces," reads a statement published to the ministry's website. "The search for the remains of the destroyed UAV is currently underway."

In another report, the ministry confirmed that a serviceman of the Azerbaijan Army was killed by Armenian forces in the Tovuz district along the border on Monday.

Since border clashes broke out in mid-July, Armenia's reconnaissance UAVs have regularly been infringing the airspace of Azerbaijan over both military and civilian positions. Air Defense units of Azerbaijan have neutralized eight flying robots to date. Two drones have been identified to be tactical X-55, an unmanned aircraft designed and manufactured at Armenia's defense industry units. X-55 measures 3.8 meters in length and 50 kilograms in weight. It has a maximum speed of 130 kilometers per hour.

The two South Caucasus neighbor countries Armenia and Azerbaijan have been at odds since the late 1980s with the dramatic rise in anti-Azerbaijan sentiments in Armenia, at the center of which stood Armenia's illegal claims for Azerbaijan's historic Nagorno-Karabakh region. The campaign broke in a full-blown military operation in 1991, with Armenia launching an all-out attack on Azerbaijani lands after the dissolution of the USSR.

In 1993, the United Nations Security Council adopted four resolutions to demand immediate withdrawal of the occupying forces from Azerbaijani lands and return of internally displaced Azerbaijanis to their ancestral lands. All four legally binding documents go unfulfilled by Armenia to date.

In the early 1990s, the Organization for Security and Cooperation in Europe established the Minsk Group, a special mediation structure co-chaired by diplomats from Russia, the US and France, which is tasked with helping Armenia and Azerbaijan find a political solution to the conflict. However, no progress has been achieved so far and Baku says this is due to the group's failure to hold Armenia accountable for its illegal occupation of Azerbaijani lands.

The ongoing conflict in Azerbaijan's Nagorno-Karabakh region paves the way for regular hostilities both along the line of contact and on the Armenia-Azerbaijan border. Armies clashed in the flagrant border fighting on July 12-16. Armenia's heavy shelling of Azerbaijani positions in the Tovuz district catapulted a short, but bloody war over four days. Armenian troops targeted civilian settlements throughout the hostilities, as well. In the wake of the war, Azerbaijan has lost 12 servicemen, including one general, and a civilian.

Although official data confirmed four deaths on Armenia's side, the civil society of the country accused the authorities of deliberately hiding the real numbers, which they believe is more than 30.

Authorities in Azerbaijan say that the recent developments testify to Armenia's intentions of launching a new offensive. Azerbaijan's President Ilham Aliyev said recently that Armenia is preparing for a new war as it is concentrating troops near the line of contact in the occupied Azerbaijani lands.

"Armenia deliberately targets civilian population and perpetrates provocations along the Line of Contact and Armenia-Azerbaijan border. The aggressive rhetoric and provocations of Armenia show that Armenia is preparing for a new aggression against Azerbaijan. We call on the UN and international community to urge Armenia to refrain from another military aggression," President Aliyev said in his speech in a video format at the high-level meeting on the sidelines of the 75th session of the UN General Assembly on Monday. "Armenia-Azerbaijan conflict must be resolved on the basis of Azerbaijan’s territorial integrity according to the UN Security Council Resolutions."

The participation of Armenian Prime Minister Nikol Pashinyan's wife Anna Hakobyan in the illegal military training in the occupied Azerbaijani lands was seen as one of the most provocative actions recently taken by Yerevan. Hakobyan, 42, traveled to the Nagorno-Karabakh region to attend the week-long exercises along with 15 women on August 25, weeks after deadly border fighting, Anadolu Agency reports referring to Armenian media. Hakobyan and the other women underwent professional, physical, combat preparedness, and first aid training. She even posed for a photo with a Kalashnikov machine gun in her hands.

Even before this incident, Prime Minister Pashinyan has undermined political negotiations. A week after the July clashes, he drafted seven "conditions" in which he called for recognizing separatists as a party to talks and acknowledging "self-determination right" of separatists. Authorities of Azerbaijan assessed it as an effort to stop, change and distort the format of negotiations.