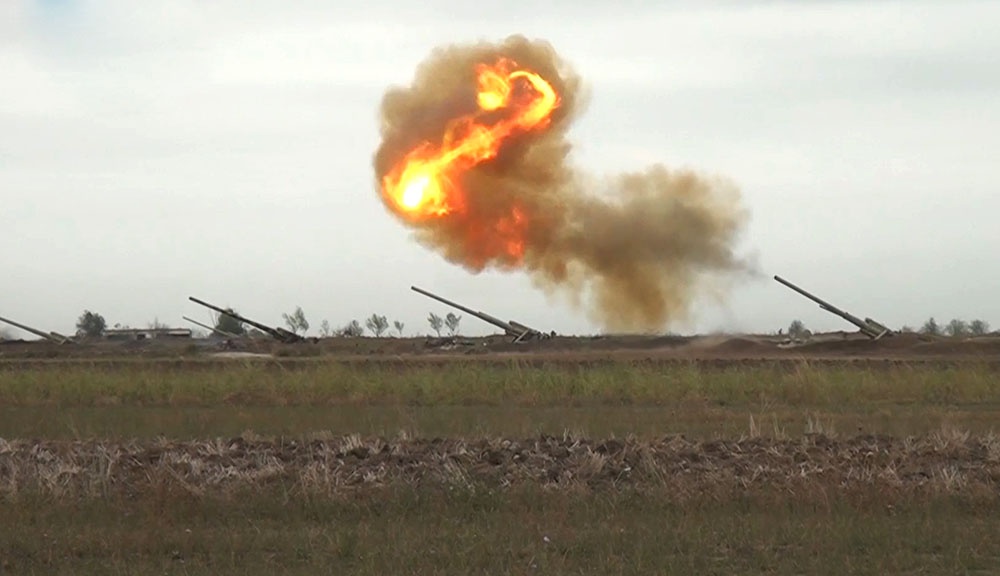 The Defense Ministry of Azerbaijan has denied Armenia’s reports about Azerbaijani army’s using F-16 fighter jets from the Turkish Air Force in ongoing fighting with Armenia.

“The information spread by the Armenian side about the alleged shooting down of an F-16 fighter belonging to our Air Force is false and provocative,” head of the ministry’s press service, Colonel Vagif Dargahli said in a statement issued on Tuesday.

“We state that there are no F-16 fighter jets in the arsenal of our Air Force. For this reason, we remind the Armenian side that it is impossible to destroy what does not exist," he added.

Armenian media reported that the country’s air defense units have downed a fighter jet of the Azerbaijani air force and later claimed that the aircraft was an F-16, which does not exist in Azerbaijan’s arsenal. The report was upheld by Armenia’s President Armen Sarkissian at the virtual opening of the CYBERSEC2020 international forum organized jointly with NATO on Monday. In an online address, he claimed that Turkey supports Azerbaijan through its personnel, mercenaries, drones and F-16 fighter aircraft.

Azerbaijan’s Defense Ministry announced shortly after the Armenian media reports that the national air force did not lose any aircraft during the ongoing battles.

Senior aide to Azerbaijan’s President, Hikmat Hajiyev denied news of militants being deployed from Syria to Azerbaijan. In a Twitter post, he referred to the claim as a “rumor” and “complete nonsense” as part of the next provocation by Armenia.

Tensions between Armenia and Azerbaijan turned violent after Armenian troops began shelling heavily the military positions and civilian settlements in Azerbaijan along the Line of Contact on September 27. The ongoing clashes claimed lives on both sides, according to official reports.

Five family members, including 13-year-old and 14-year-old schoolchildren were killed on Sunday by Armenian fire on the Gashalty village of Azerbaijan’s Naftalan city. The mortar bomb is said to have fallen in the courtyard of the family’s house while they were outside. One more civilian fell to Armenia’s shelling in the Evoghlu village of the Aghdam district on the same day. Azerbaijani civilian casualties increased on Monday after Armenian troops targeted the city of Terter killing three peaceful residents. Armenia's armed forces killed at least 12 civilians in Azerbaijan in the past three days of heavy clashes.

Authorities in Baku accused Armenia’s military of deliberately targeting Azerbaijani cities, villages and farms located along the frontline of the armies. According to the reports, 35 civilians were injured during the Armenian attacks on Azerbaijan and all of them have been hospitalized. Armenian forces shelled a court building, police station, carpet weaving workshop, dozens of civilian houses in Azerbaijani districts located along the Line of Contact.

Azerbaijani authorities did not report army losses, while Armenian side confirmed deaths of 84 servicemen and over 200 injuries. However, the Defense Ministry of Azerbaijan announced that around 2300 Armenian servicemen had been killed or injured during the clashes.

Meanwhile, Azerbaijan’s Defense Ministry announced on Tuesday that the armed forces of Armenia try to drag the fighting from the occupied Azerbaijani lands to the Armenia-Azerbaijan border. Artillery units of Armenia stationed in the Vardenis region started shelling the western Azerbaijani district of Dashkasan on the border with Armenia on Tuesday. Dashkasan shares a 8 kilometer-long frontier with Vardenis.

The Armenia-Azerbaijan state border staged the most flagrant hostilities of its kind since 1990s in July. Armenia’s forces targeted the military positions and civilian settlements in the western Tovuz district of Azerbaijan on July 12. The non-stop shelling by the Armenian troops led to a short, but bloody war over four days until July 16. Azerbaijan lost 12 servicemen, including a general, and a civilian during the clashes. Armenia’s loss was over 30 servicemen, according to multiple reports by the country’s civil society, who criticized the authorities for hiding real numbers by confirming only 4 deaths.

Armenia and Azerbaijan have been in conflict for around 30 years since the occupation of Azerbaijani lands by Armenia began in the early 1990s. Dissolution of the Soviet Union in 1991 paved the way for Armenia to launch a full-fledged military attack on Azerbaijan. Armenia launched a military campaign against Azerbaijan which lasted until a ceasefire deal was reached in 1994. The full-fledged war ended with the occupation of 20 percent of Azerbaijan’s internationally recognized territories including the Nagorno-Karabakh region and seven surrounding districts by Armenia. The war claimed the lives of over 30,000 Azerbaijanis. Occupied Azerbaijani lands have been subjected to intense ethnic cleansing by Armenia which led to forcible displacement of around one million Azerbaijanis.

At the height of the war, in 1993, the UN Security Council adopted four resolutions to demand immediate and unconditional withdrawal of occupying forces from the Azerbaijani lands. All four documents go unfulfilled by Armenia to date. The Nagorno-Karabakh conflict continues to threaten regional peace and stability amidst unproductive efforts of the OSCE Minsk Group, a special mediation group co-chaired by the US, France and Russia. The shuttle diplomacy of the co-chairmen failed to reach political solution to the decades-old conflict. Authorities in Baku accuse the Minsk Group diplomats of lacking adequate response to Armenia’s illegal occupation of Azerbaijani lands.