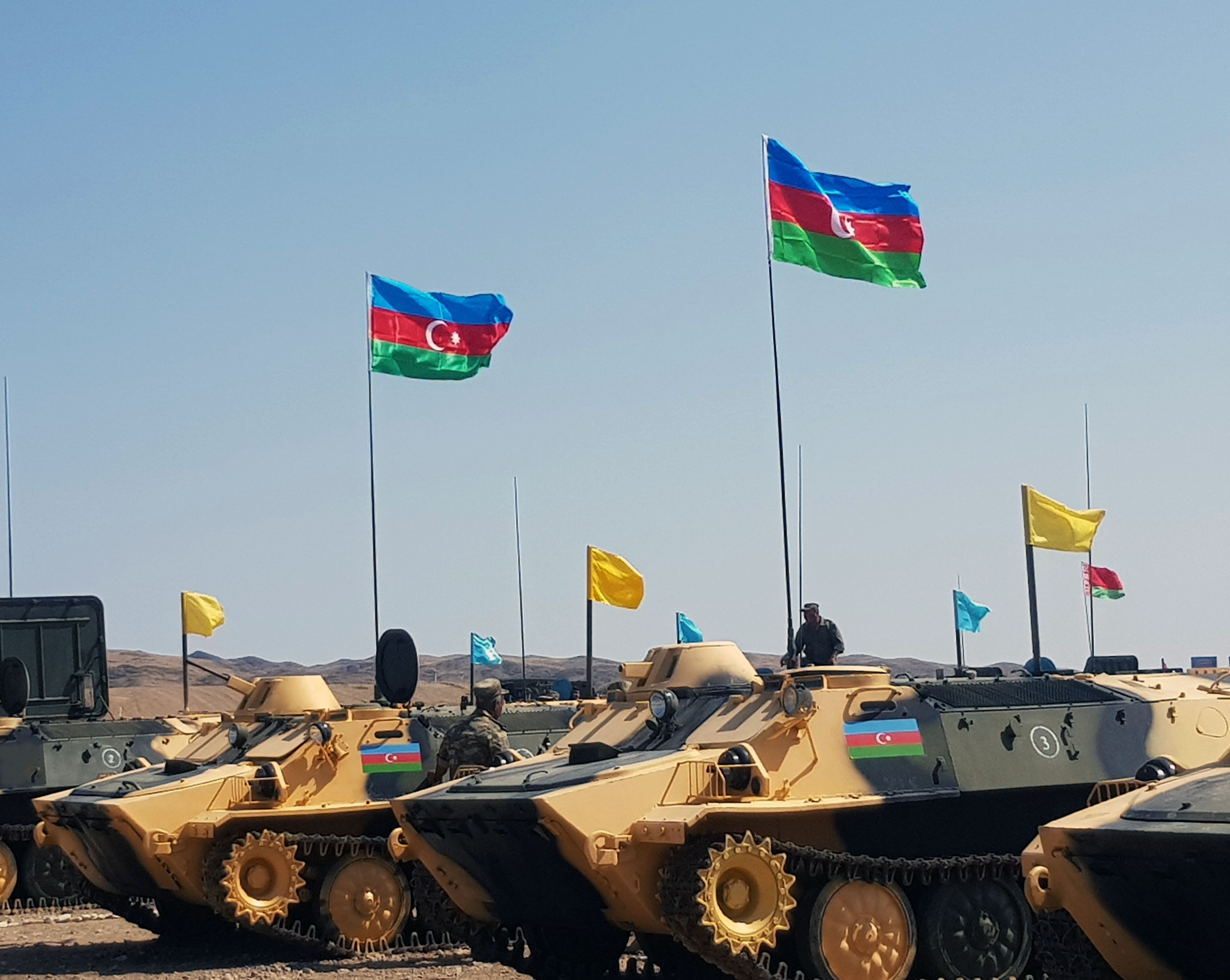 Allegations made by a Russian newspaper about the deployment of Syrian fighters and the setting up of a Turkish military base in Azerbaijan have been denied Wednesday by the country's defense ministry, who accused the media outlet of lying.

On Tuesday, Russia's Nezavisimaya Gazeta published an article claiming that fighters from different armed factions in Syria have been brought to Azerbaijan. The newspaper cited Telegram channels and experts as its primary sources of information, which it says is being verified.

"We categorically reject the false fabrications indicated in the article that allegedly "there is already a de-facto Turkish military base in Nakhchivan" and about the "transfer of about 500 Syrian militants, mainly Turkmans, to Azerbaijan," the ministry said in a statement.

"All the arguments given in the above-mentioned article, especially those concerning the alleged transfer of militants from Syria to Azerbaijan, are clear disinformation and in no way reflect reality. This article is custom-made, willful and defamatory."

The author of the news article published by Nezavisimaya Gazeta claims that after recent joint military drills, Turkish and Azerbaijani authorities agreed to set up military bases in the Nakhchivan exclave and the Absheron peninsula of Azerbaijan. The article quotes a Turkish political analyst who assumes that Ankara has allegedly set up a base in Nakhchivan, an autonomous republic in the southwest of Azerbaijan.

"Support on behalf of Ankara in resolving conflict situations in almost all regions where there are military bases is provided not only by regular government forces, but also by the so-called pro-Turkish proxy formations," the newspaper reads, adding that Baku could possibly use such forces in the territorial conflict with Armenia.

A large number of Turkish military personnel and equipment have already been sent to Azerbaijan where they participated in large-scale military drills from late July to mid-August. The drills aimed to strengthen the military capabilities of both armies, improve interaction and coordination between them and apply the experience of Turkish armed forces to the Azerbaijani army.

Azerbaijan's defense ministry officially denied the presence of foreign military bases or any illegal armed group in the country. It added that the country's army was well-equipped, trained and sophisticated enough to carry out any combat mission needed to liberate lands occupied by Armenia and restore Azerbaijan's territorial integrity.

The ministry suggested that Armenia, in fact, stands to benefit the most from recruiting mercenaries from the Middle East because of its serious resource problems. The country recently amended its defense laws which would legitimize the recruitment of mercenaries from hotspots in the Middle East — particularly Syria and Lebanon — under the guise of a militia.

On August 25, Armenia's government submitted for public discussion a project to create a paramilitary force. According to a draft text of the prepared bill, a militia is defined as the voluntary participation of citizens in the military defense of Armenia during an armed attack or military action. The amendment addresses the militia's uniforms, as well as how they would be armed and trained.

The decision followed deadly border clashes between Armenian and Azerbaijani armies in mid-July. On July 12, Armenian troops opened artillery fire on Azerbaijani positions stationed in the Tovuz region along the border with Armenia.

The fighting continued for four days until July 16, claiming lives on both sides. Azerbaijan lost 12 servicemen, including one general. One civilian was also killed by Armenian forces. Armenian authorities officially confirmed four deaths on its side; however, civil society believes the true death toll to be over 30.

The July clashes took place far from the main conflict zone in the occupied Nagorno-Karabakh region of Azerbaijan. Armenia's forces occupied the Nagorno-Karabakh region and seven surrounding districts of Azerbaijan in a war that broke out in 1991, sparked by a full-fledged attack on Azerbaijan. Armenia's authorities used the Soviet Union's collapse in 1991 as an opportunity to seize Azerbaijani lands. The full-fledged war stopped after a ceasefire was reached in 1994, but the lands remain occupied. During the war, 30,000 Azerbaijanis were killed and one million were forcibly displaced by Armenia's forces.

Today, Armenia's government is trying to illegally settle Armenians from the Middle East in occupied Azerbaijani lands. The self-styled puppet leader of occupying forces in the Nagorno-Karabakh region, Arayik Harutunyan, has announced plans to settle 100-150 Armenian families from Lebanon after a massive explosion rocked Beirut on August 4, destroying hundreds of surrounding homes.

"The settlement of Lebanese Armenians in Karabakh may lead to the creation of a new terrorist group here. There are ample opportunities for the revival of the ASALA terrorist organization and for this organization to open and operate new training camps in Karabakh," Baku-based political analyst Mahammad Asadullazada said. "It is possible that international tension will increase and the Armenians will revive ASALA and carry out terrorist attacks against Azerbaijan and Turkey."

On his part, Russian political analyst Andrei Petrov said that Armenia is trying to capitalize on the situation in Lebanon by sending separatists to Nagorno-Karabakh.

"Armenians are taking advantage of the situation. Then, they will show the whole world that Armenians live in Karabakh," Petrov said. "Armenia will later label those Armenians relocated from Lebanon as natives of Nagorno-Karabakh. That is the goal."