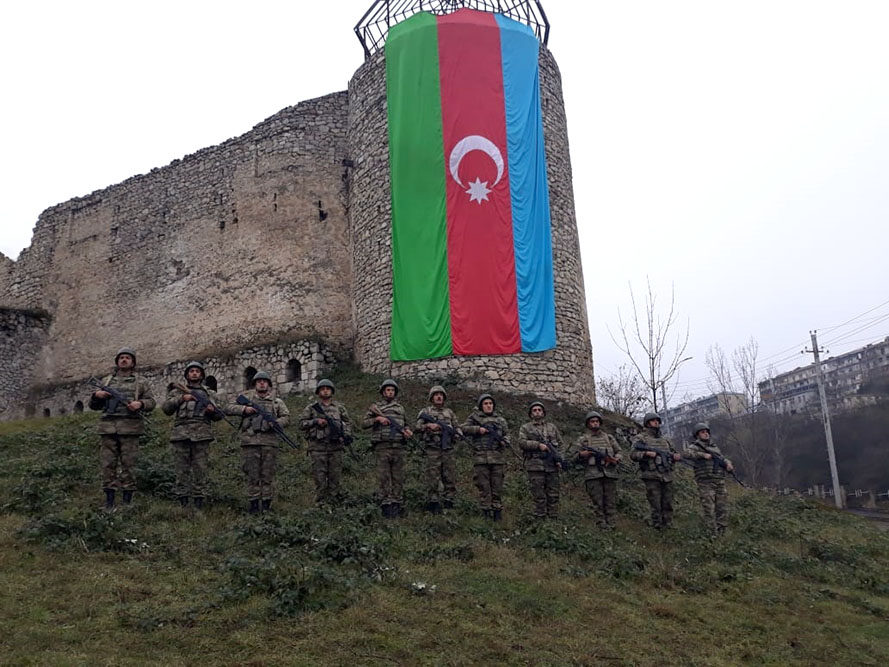 A group of Azerbaijani forces guards the entrance to the city of Shusha in the Nagorno-Karabakh region of Azerbaijan, December 4, 2020 / Ministry of Defense of Azerbaijan

The Defense Ministry of Azerbaijan has rejected accusations claiming that the Azerbaijani army had violated the ceasefire in its Karabakh region and wounded Armenian serviceman.

The ministry's spokesperson, Colonel Vagif Dargahli said the actions of the Azerbaijan forces did not breach the truce since it came into effect on November 10.

Armenian media reported on Wednesday that the Azerbaijani troops opened fire in the Nagorno-Karabakh (Daghlig Garabagh) region, wounding 20-year-old Armenian soldier Vartan Kirakosyan. The soldier has reportedly fallen into a "stable but serious" condition after undergoing surgery in a local hospital, according to the reports.

Although the Armenian side portrayed the alleged event as a violation of the peacekeeping efforts, Nikolay Kruchinin, a representative of the Russian peacekeeping contingent in the Nagorno-Karabakh region of Azerbaijan, dismissed the news.

The current ceasefire in the Karabakh region followed a six-week-long bloody war between Armenia and Azerbaijan last year. The region staged the largest clashes between the sides following the decades-old ceasefire that halted hostilities in 1994. The Azerbaijani army has forced the Armenian military to withdraw from the territories it had been occupying for nearly three decades in 44-day-long counter-attack operations from September 27 to November 10. Azerbaijani forces liberated more than 300 settlements, including five major cities and strategically important territories in the wake of the counter-offensive operations.

Several violations of the ceasefire have occurred following the activation of the truce on November 10. Armed Armenian gangs committed the first sudden attack on the Azerbaijani positions in the liberated Sur village of the Khojavend district in the Nagorno-Karabakh region on November 26. Three Azerbaijani servicemen were killed and two were injured in the wake of the assault. On December 8, the same armed groups killed one Azerbaijani serviceman and seriously wounded an employee of Azerbaijan’s Azercell company during the installation of communication lines and transmission equipment near the Hadrut settlement in the Khojavend district.

The next breach of the ceasefire came on December 27 when an illegal Armenian armed group attacked the units of the Azerbaijani army in the Aghdam (Akaku) village of the Khojavend district. The offensive claimed the life of one Azerbaijani serviceman and injured another.

Following the incidents, the Azerbaijani authorities called on the Armenian side to adhere to the trilateral statement, support the observance of the ceasefire regime, ensure peace in the region, prevent provocations that would escalate the situation in the Nagorno-Karabakh region of Azerbaijan. The Azerbaijani defense ministry vowed to take firm measures in the event that Armenian criminals resort to similar incidents.