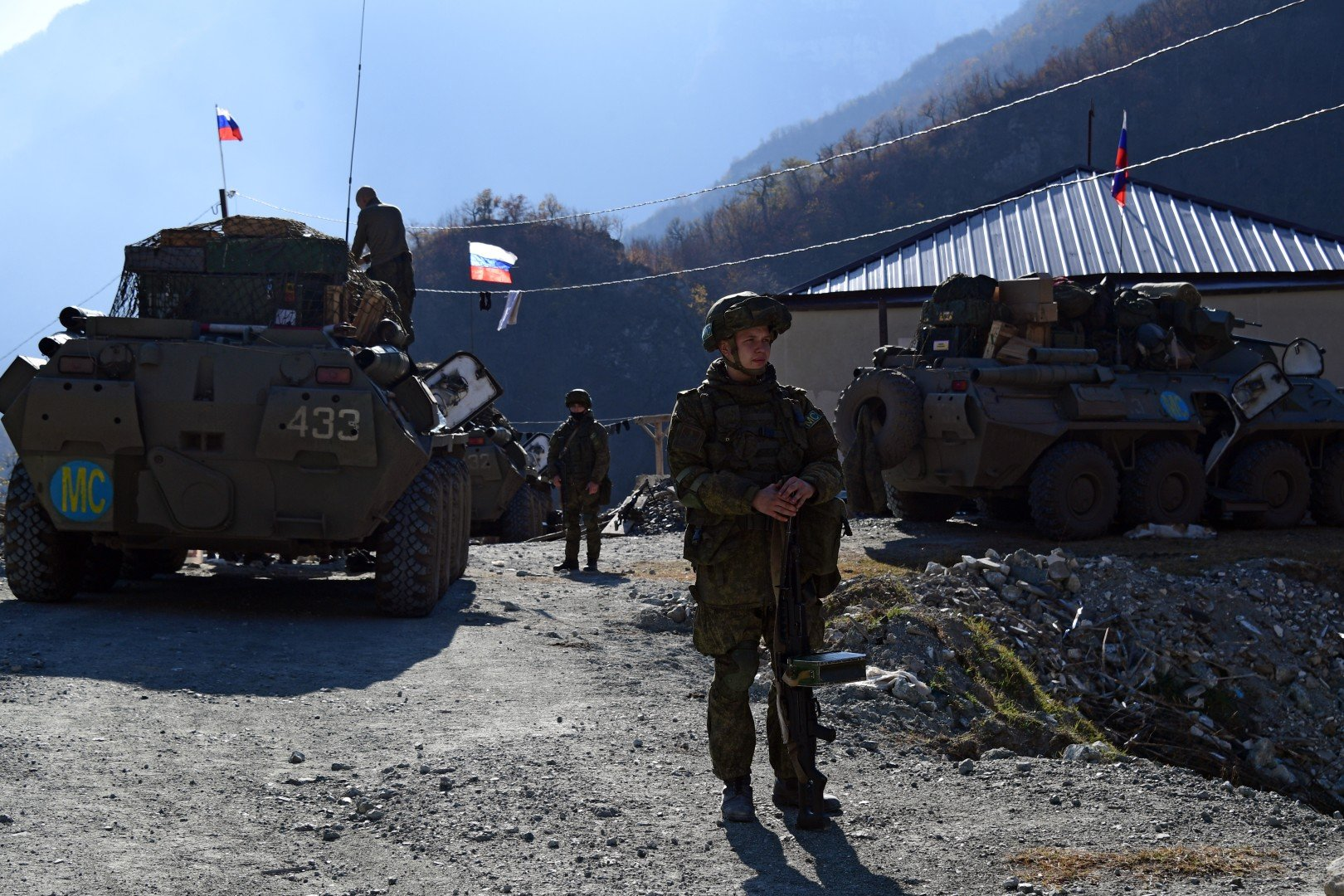 A total of 1,960 Russian peacekeepers have been deployed in Azerbaijan's Karabakh region under the tripartite statement signed by Armenia, Azerbaijan, and Russia on November 10, 2020 / Courtesy

The Defense Ministry of Azerbaijan demanded that Russian peacekeepers put an end to the illegal deployment of Armenian forces in Azerbaijan’s Karabakh (Garabagh) region.

According to the ministry, Armenian troops were stationed in certain parts of the Karabakh region, where Russian peacekeepers are temporarily deployed.

“In recent days, Armenia having violated the trilateral statement by moving its armed forces to the territory of Azerbaijan, where Russian peacekeepers are temporarily deployed, is setting up its new posts near Mukhtarkend and Shushakend [near the city of Shusha], as well as in the territories to the east of the administrative boundaries of the Kalbajar and Lachin regions,” the ministry said in a statement on Wednesday.

The Russian peacekeeping contingent in the region consists of 1,960 armed servicemen, 90 armored personnel carriers, 380 units of automobile and special equipment. It has been immediately deployed in the region as part of the trilateral statement that ended a 44-day bloody war between Armenia and Azerbaijan. The contingent will stay in the region for five years with the possibility of extension unless any of the signatory parties object to this extension six months before the expiration of the current period.

“In accordance with the provisions of the trilateral statement, the peacekeeping forces of the Russian Federation must put an end to the deployment of the Armenian armed forces in the territories of the Azerbaijan Republic, where they are temporarily deployed,” the ministry said.

According to Clause 4 of the statement, which was signed by the leaders of Armenia, Azerbaijan and Russia on November 10, 2020, the peacekeeping contingent of Russia should have been deployed in the region in parallel with the withdrawal of the Armenian armed forces. However, no report has so far confirmed the pullout of the Armenian forces from the region.

News about the illegal deployment of the Armenian armed forces in the Azerbaijani territories has been making the headlines in recent days. Azerbaijani media agency Caliber stated that Armenia has recently sent the military personnel to the Karabakh region in more than 20 trucks and other carrier vehicles. In addition, military servicemen disguised in civil clothing have also been dispatched in passenger cars from Armenia. According to the agency, the leadership of the Russian peacekeeping contingent in the Karabakh region is aware of the Armenian troops’ relocation and has not been ordering preventive measures.

Baku-based political analyst Elkhan Shahinoglu is convinced that the Azerbaijani army should interfere in the process by taking under the control the main route used for the relocation of the Armenian forces.

“The Lachin corridor must be taken under control, the separatists in Karabakh must be disarmed - there is no other alternative,” he told Caspian News.

The Lachin corridor is the only route connecting Armenia with the parts of the Karabakh region temporarily controlled by the Russian peacekeepers. The corridor, measuring 5 kilometers in width, is currently supervised by the peacekeeping contingent.

Simultaneously with the deployment of the Armenian forces, the ceasefire in the Karabakh region has also been violated by Armenia’s military over the recent period.

In the meantime, Armenia’s Defense Minister Arshak Karapetyan, who took the office earlier this month, recently said the Armenian army was ready to use force against the Azerbaijani troops on the Armenia-Azerbaijan border amidst the rising tensions.

Following his statement, more than 20 ceasefire infringements have been committed by the Armenian forces in different directions on the border so far, including the Nakhchivan, Kalbajar, Gadabay and Dashkasan regions of Azerbaijan. The latest incidents took place on August 12 when the Armenian army shelled the military positions of the Azerbaijani army in Gadabay and Kalbajar.