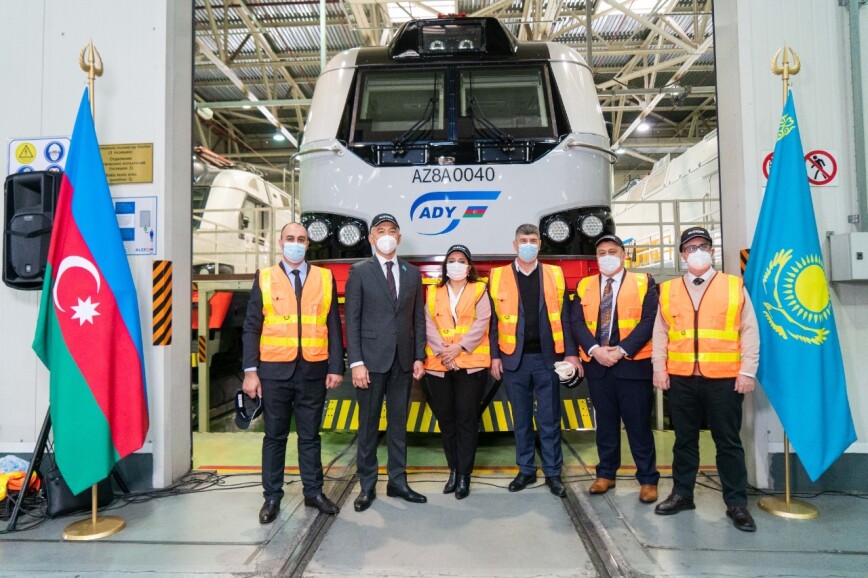 Participants of the handover ceremony with the AZ8A freight locomotive making a background in Nur-Sultan, Kazakhstan, February 9, 2022 / Azerbaijan Railways

Azerbaijan Railways Company (ADY) received the last batch of freight locomotives of the Alstom brand this week completing the purchase from the French manufacturer.

The trains were showcased by ADY representatives at the Electric Locomotive Assembly Plant at the Nur-Sultan city of Kazakhstan on Wednesday. The facility is a certified partner of Alstom on the assembly of railway rolling stock.

“This project will create ample opportunities for the efficient operation of the transport system. All passenger locomotives and 37 freight locomotives have already been delivered to the country [Azerbaijan],” ADY press secretary Natavan Bayramova said at the handover ceremony of the locomotives, according to ADY.

“The 38th locomotive is about to be transported. The final tests of the last two locomotives have been carried out and will be delivered to the country in the coming days, ADY added.

The locomotives will be put into operation at the initial stage in the Baku-Boyuk Kesik segment of the East-West transport corridor and the Bilajari-Yalama section of the North-South transport corridor in the territory of Azerbaijan. The East-West Transport Corridor stretches from China to Turkey and ultimately to Europe. Azerbaijan is incorporated into the route, which starts in eastern China and extends westward, traversing Kazakhstan, the Caspian Sea, Azerbaijan, Georgia, and Turkey. From there, it forks in two directions: Eastern Europe and to the Mediterranean Sea.

In 2017, Azerbaijan launched the 846 km-long (526 miles) Baku-Tbilisi-Kars (BTK) railway, which is considered the most pivotal link in the modern railway grid of the South Caucasus. The railway cuts the transit time for the shipment of goods coming from the Far East to Europe by almost half.

Meanwhile, Alstom's Executive Director for West and Central Asia, Kanat Alpysbayev is convinced that the new trains will positively contribute to increasing the cargo transportation capacity of the Trans-Caspian International Transport Corridor which starts from Southeast Asia and China, runs through Kazakhstan, the Caspian sea, Azerbaijan, Georgia and further to European countries.

The eight-axle AZ8A Prima T8 is considered to be one of the world’s most powerful electric locomotives. This model of a two-section freight locomotive hauls up to 9,000 tons of cargo and runs long-distance routes at 120 kilometers per hour (74.5 mph) with installed continuous power of 8.8 megawatts. Hi-tech features allow it to run in energy-saving mode, meant to be energy efficient and environmentally friendly.

The AZ8A is capable of running a non-stop service in temperatures ranging from -25°C to 50°C (from -13°F to 122°F). The coach is equipped with a climate control system and storing facilities. Cabins comply with modern-day ergonomics and safety regulations that ensure the safety and comfort of cargo, passengers, and operators. Also, maintenance and lifecycle costs are ultimately lower in the AZ8A because of its cutting-edge modular design.

Azerbaijan’s railway system stretches along 2,900 km (1,800 mi) of tracks. As of 2021, about 60 percent of the rail routes are electrified at 3 kilovolts (kV), using a direct current. The Azerbaijani railway network is an important link between the Black and Caspian Seas within a vast Eurasian transport corridor that stretches from China to Europe. The BTK railroad makes up a significant portion of the country's national railway network.