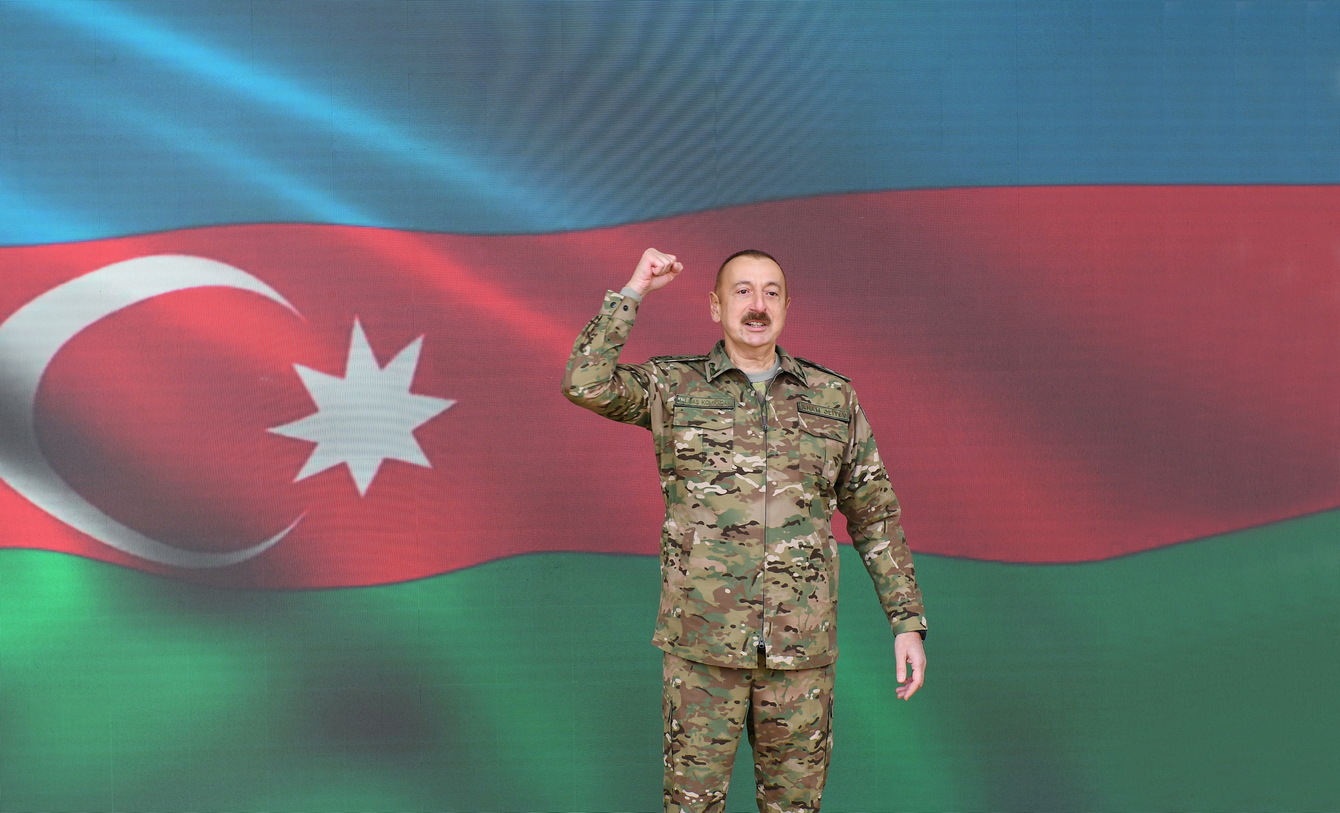 President Ilham Aliyev announces the liberation of the city of Shusha in an address to the nation, Baku, Azerbaijan, November 8, 2020 / President.Az

Azerbaijanis today commemorate the first anniversary of the start of the war, dubbed “Patriotic War”, in the country's Karabakh (Garabagh) region, which started on September 27, 2020. The “Commemoration Day” honors the memories of the fallen heroes who liberated Azerbaijan's lands after nearly three decades of Armenian occupation.

The last year's 44-day war was a triumph and liberation for Azerbaijan, while for Armenia, it was a struggle to continue the illegal occupation of the other country's territory.

Armenia and Azerbaijan had been in an armed conflict for nearly 30 years over the Karabakh region, which is internationally recognized territory of Azerbaijan. Armenia occupied the Karabakh region in the wake of the first war in the early 1990s. Armenia launched full-blown military aggression against Azerbaijan following the Soviet Union’s dissolution in 1991. The bloody war lasted until a ceasefire in 1994 and saw Armenia occupying 20 percent of Azerbaijan’s internationally recognized territories. Over 30,000 Azerbaijanis were killed, and one million were expelled from those lands in a brutal ethnic cleansing policy conducted by Armenia.

Armenian authorities failed to fulfill four resolutions adopted in 1993 by the UN Security Council demanding the immediate complete and unconditional withdrawal of the occupying forces from the Azerbaijani lands and the return of internally displaced Azerbaijanis to their native lands. The lack of international pressure on Armenia and three decades of ineffective mediation by the OSCE Minsk Group have led the diplomacy to a dead-end in fetching a lasting solution to the conflict.

Moscow-based American political analyst, Andrew Korybko, says instead of opting for a political solution, Armenia has been adopting a Machiavellian scheme aimed to further consolidate its illegal occupation.

“This Machiavellian scheme not only failed, but it tremendously backfired. Armenia should have settled the issue diplomatically but declined to do so all these decades because it wrongly believed that it would be able to militarily defend its occupation,” Korybko told Caspian News.

“Armenia refused to diplomatically resolve the issue and had actually begun militarily provoking Azerbaijan once again around that time. [Armenian] Prime Minister Pashinyan might also have thought that increasing tensions with Azerbaijan could boost his popularity at home and distract from his epic mismanagement of the Armenian economy.”

War clouds had been gathering over the Karabakh region as Armenia refused to put an end to the conflict diplomatically, while it regularly fueled provocative rhetoric, in addition to staging sabotage and infiltration attempts.

In August 2019, PM Pashinyan visited the occupied Azerbaijani region, where he delivered a provocative speech by saying "Artsakh [the name Armenia uses for Karabakh] is Armenia. Period." Pashinyan also called for a so-called unification between Armenia and the Karabakh region by reviving the notorious “miatsum” (unification) slogan, which was used by Armenian nationalists during the first war in the Karabakh region.

In July 2020, short but bloody hostilities broke out on the Armenia-Azerbaijan border in the western Tovuz region of Azerbaijan. According to Armenian military analyst, Van Hambardzumyan, the Armenian side triggered the clashes by shooting at Azerbaijani servicemen patrolling along the frontier. Intensive skirmishes resulted in the deaths of 12 Azerbaijani servicemen, including a major-general and a colonel, and one civilian.

Shortly after the border incident, the Armenian military dispatched a sabotage group to infiltrate the Azerbaijani positions in the western Goranboy district. Azerbaijani servicemen foiled the attempt and captured the sabotage-reconnaissance group’s commander, Lieutenant Gurgin Alberyan, who admitted to the crime.

On September 27, 2020, the decades-old conflict between the two countries ultimately spiraled after Armenia’s forces deployed in the occupied Azerbaijani lands shelled military positions and civilian settlements of Azerbaijan.

Azerbaijani forces took immediate counter-measures to push back the offensive. The Defense Ministry of Azerbaijan announced the start of counter-offensive operations “to prevent the combat activity of the enemy troops and secure the safety of civilians” coming under fire. The first gains of the counterattacks came by the noon of the same day when the Azerbaijani army liberated a number of villages and heights in the then-occupied territories.

During the 44-day counter-attack operations, dubbed “Iron Fist,” Azerbaijani forces liberated over 300 settlements, including the cities of Jabrayil, Fuzuli, Zangilan, Gubadli, and Shusha, from nearly 30-year-long illegal Armenian occupation. The ultimate blow on the resistance of the Armenian troops was the liberation of the Shusha city on November 8. The city’s liberation after 28 years of occupation was said to be crucial in the retreat of the Armenian forces and end of hostilities.

The war ended in a tripartite statement signed on November 10 by Armenia, Azerbaijan, and Russia. Under the statement, Armenia also returned the occupied Aghdam, Kalbajar, and Lachin districts to Azerbaijan by December 1, 2020. 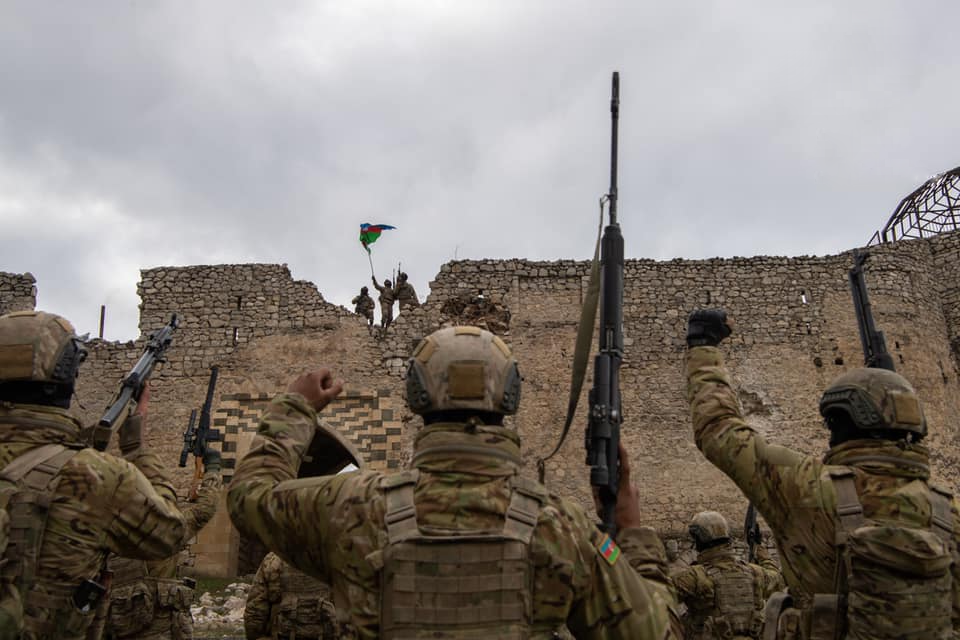 While the ceasefire signed in 1994 ushered in an unsettled status quo that lasted for 26 years, last year’s war established an all-new reality in the region. Azerbaijani authorities have repeatedly stated that the conflict was irreversibly over paving the way for joint efforts to achieve a peace agreement between Azerbaijan and Armenia based on mutual recognition of sovereignty and territorial integrity of each other.

The tripartite statement sets conditions for the restoration of all economic and transport links in the region. Armenian authorities have assumed to guarantee the safety of transport links between the western regions of Azerbaijan and the Nakhchivan region, an Azerbaijani autonomous exclave on the southwest of the country. Nakhchivan should be linked to Azerbaijan’s mainland on an all-new route called Zangazur Corridor under the tripartite statement. Azerbaijan, in turn, will open its territory for ensuring railway links between Armenia and Russia, as well as Armenia and Iran.

However, the Armenian authorities have been rejecting negotiations on the opening of the Zangazur Corridor. Prime Minister Nikol Pashinyan said such an issue has not been and would not be on his government’s agenda.

Political analyst, Andrew Korybko says in the current circumstances, the primary challenge to implementing the tripartite statement lies in Armenia's lack of compliance with its terms.

“The Armenian leadership doesn't truly appreciate the mutual benefits inherent to the agreement's decision to unlock regional transport links. Russia can only do so much to encourage its ally to reconsider its obstinate position. It might ultimately just take some time for the country to do what its leadership initially agreed to since it desperately needs to improve its economy through the enhanced trade ties with its neighbors that the treaty will unlock,” he told Caspian News.