Azerbaijan Celebrates Anniversary of The Day of the Armed Forces 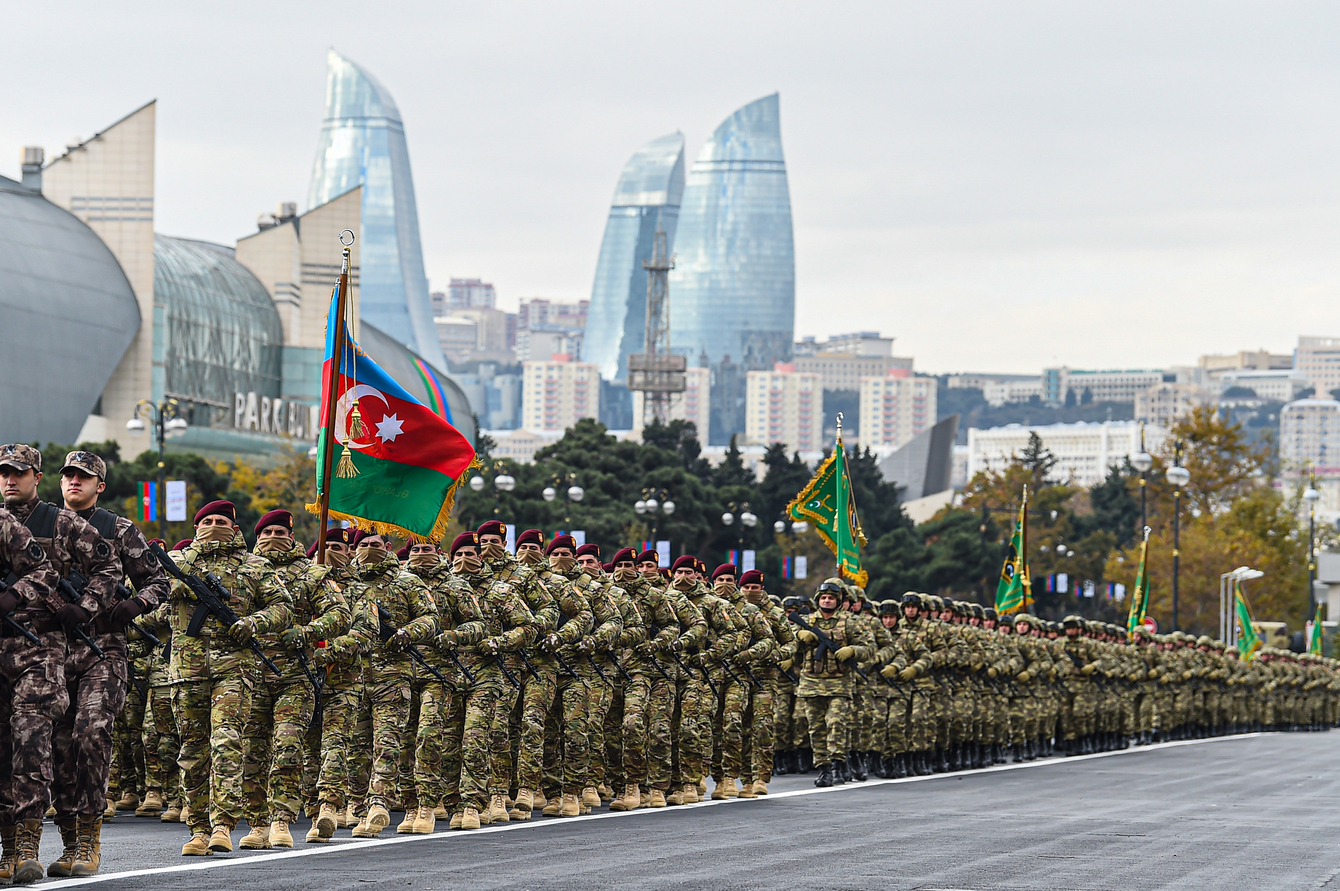 Various units of the Azerbaijani Armed Forces march through the Freedom Square in the "Victory Parade" dedicated to the triumph in the successful counter-attack operations in Azerbaijan's Karabakh region from September 27 to November 9, 2020, Baku, Azerbaijan, December 10, 2020 / President.Az

Azerbaijan, the South Caucasus’ largest country of over 10 million people, celebrates today the 103rd year since the creation of the national army. Former Azerbaijani President Heydar Aliyev established the Armed Forces Day in 1998 as one of the public holidays marked across the country.

The Armed Forces of Azerbaijan were established in 1918 when the Azerbaijan Democratic Republic (ADR) was founded after the fall of the Russian Empire. The newborn republic needed an army that would safeguard the country and its borders against external threats. The national army was established after ADR’s adoption of the Declaration of Independence, which ushered in a short-lived but independent state, calling and identifying armed forces as one of the pillars of national statehood.

On June 26, 1918, the ADR, considered the first democratic republic in the entire Muslim world, announced the creation of the national armed forces. Around 25,000 soldiers were recruited and the government allocated 24 percent of the state budget for military purposes. By August 1 of the same year, the newly established Military Ministry took over the armed forces. The first solemn parade of the national army took place in 1919.

In April 1920, the ADR was occupied by the Bolshevik forces, and Azerbaijan was later incorporated into the Soviet Union. After the collapse of the Soviet Union in 1991, Azerbaijan formed its independent national army once again.

The modern armed forces of the Republic of Azerbaijan comprise the Land Forces, the Air and Air Defense Forces, and the Navy. The National Guard, the State Border Service, and the Internal Troops of Azerbaijan are considered associated forces.

Global Firepower (GFP), a website that provides data on and ranks national militaries around the world, ranks the Armed Forces of Azerbaijan as the strongest in the South Caucasus region, which also includes Georgia and Armenia. In its 2021 data, GFP identifies Azerbaijan as the world’s 64th strongest military among 140 countries worldwide and the strongest in South Caucasus, while it ranks Georgia and Armenia at 92 and 100, respectively.

“At my initiative, military spending is increasing. First of all, because we used a lot of weapons during the war, they need to be restored,” President Ilham Aliyev said, referring to the last war between Armenia and Azerbaijan over the latter's Karabakh region in 2020.

“At the same time, it is planned to continue purchasing modern equipment. The modernization of our army, the combat potential of our army, the professionalism of our army will always be in the center of attention," he added.

Last year, the Azerbaijani army fought a 44-day war with Armenia in the Karabakh (Garabagh) region - an internationally recognized territory of Azerbaijan. The Karabakh region was occupied by Armenia in a bloody war that took place between 1991 and 1994, after the dissolution of the Soviet Union.

The latest outbreak of war in the region started on September 27 last year after Armenia’s forces deployed in the once occupied Azerbaijani lands shelled military positions and civilian settlements of Azerbaijan. The attacks triggered the Azerbaijani forces to take immediate counter-offensive measures for pushing back the assault.

The Azerbaijani Armed Forces used a variety of cutting-edge arms and technologies during the war, including Turkish Bayraktar TB2 drones, Israeli Harop and SkyStriker loitering munitions. The unmanned aerial vehicle (UAV) fleet of the Azerbaijani troops is said to have destroyed more than 200 pieces of armor and artillery systems of the Armenian forces during the war.

Rob Lee, a Ph.D. candidate at University College London, said TB2s were crucial in disabling the reinforcement and defense capabilities of the Armenian troops since they inflicted dramatical losses on the Armenian military assets.

“TB2s initially targeted air defense systems. The ones we’ve seen destroyed are from the 1980s. I think the radars are struggling to pick up these small UAVs,” Al Jazeera quoted Lee as saying. “Then, the TB2s started going after tanks, artillery.”

The war in the Karabakh region ended with a decisive victory claimed by the Azerbaijani army, which liberated more than 300 settlements, including the cities of Jabrayil, Fuzuli, Zangilan, Gubadli, and Shusha, from nearly 30-year-long illegal Armenian occupation. A ceasefire deal brokered by Russia ended hostilities on November 10 and reaffirmed Azerbaijan’s territorial regains. As part of the agreement, Armenia returned three occupied districts – Aghdam, Kalbajar, and Lachin to Azerbaijan by December 1, 2020.