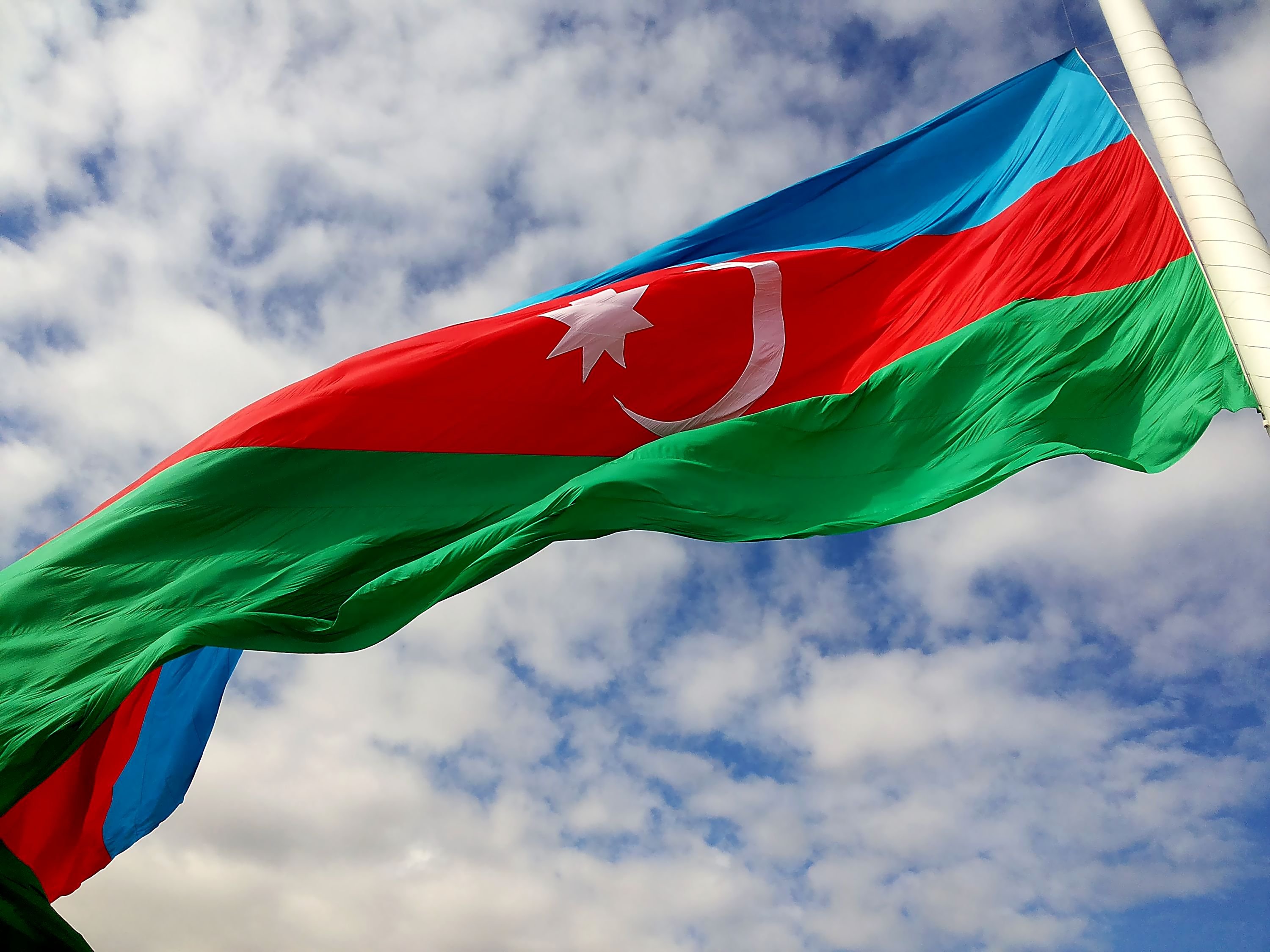 The tricolor flag of Azerbaijan has an uppermost band of blue, symbolizing the Turkic origin of the Azerbaijani nation. The middle band of red is symbolic of modern society, democracy and progress. The green band represents Azerbaijan’s connection to Islam, the predominant religion in a country of 10 million people. / Courtesy

Ten million people in Azerbaijan celebrate the 28th anniversary of the South Caucasus largest country’s regaining independence from the dissolved Soviet Union more than a quarter-century ago on October 18.

Independence Day is considered one of the most significant national holidays in Azerbaijan’s history. The document known as the Independence Declaration, which was adopted by the Supreme Council of Azerbaijan, announced the second birth of the Republic of Azerbaijan as the predecessor of the Azerbaijan Democratic Republic (ADR). Established on May 28, 1918, in the wake of the Russian Empire’s collapse, the ADR was the first democratic state in the East that granted women equal voting rights with men. However, the Bolsheviks could not tolerate ADR’s sovereignty, took over the country forcibly on April 28, 1920, and later incorporated Azerbaijan into the Soviet Union.

Seventy-one years later, on December 29, 1991, a nationwide referendum was held, which was favored by 95 percent of votes to approve Constitutional Act and finalize the recreation of the independent Republic of Azerbaijan.

“Azerbaijan gained independence for the second time in the 20th century. In 1918, the first democratic republic in the Muslim world was established in Azerbaijan,” President of Azerbaijan Ilham Aliyev said at the official reception on October 18, 2016 to mark 25th anniversary of Azerbaijan's independence.

“We are rightly proud to have been the first [democratic republic] in the Muslim world. This time, in 1991, Azerbaijan was not among the first Soviet republics to proclaim independence. Azerbaijan was the 13th republic of the Soviet Union to become independent. This is history. We should know and never forget our history.”

The first country to recognize Azerbaijan’s independence was Turkey, whose majority of the population is ethnically, culturally, and linguistically of the same Turkic roots with those living in the Caspian country. Romania, Pakistan, Switzerland, Iran, the United States and Russia followed Turkey’s lead. On March 2, 1992, the United Nations General Assembly voted to admit Azerbaijan to the UN membership.

The first years of the newly-established country have gone through serious political hardships that consecutively paved the way for economic troubles. Armenia’s military aggression against Azerbaijan paralyzed the post-Soviet economy exposing the country to internal and external threats. However, former President Heydar Aliyev’s rise to power in 1993 took the country from the chaos to the new era of prosperity.

Azerbaijan stepped into the global oil market in 1994 after the country’s government signed a production sharing agreement (PSA) with eleven international companies representing seven countries. The document, dubbed “The Contract of the Century,” broke the ground for the joint development of the Azeri-Chirag-Deepwater Gunashli complex of oil fields, located about 120 km east of Baku.

Thanks to the ambitious deal, Azerbaijan managed to attract billions of dollars of investment from the Western multinational companies. More than $270 billion investment has so far been made in the country’s economy, considered the largest and richest in South Caucasus with GDP worth of $41 billion. For example, in the early 1990s, the country’s GDP ranged between $3 billion and $8 billion.

“Twenty-five years is a long history. We have proved to the world that we are capable of living independently and successfully. Clear evidence of that is our cities getting ever more beautiful, our developing regions and Baku, one of the most beautiful cities in the world.” President Aliyev said. “We will continue to follow this path and pursue an independent policy. We will go forward relying on the will of our people. Our independence is irreversible and eternal.”

But, the economically strong country has been suffering from military aggression since its independence in 1991, when another post-Soviet, South Caucasus state, namely Armenia kicked off a bloody war and occupied 20 percent of Azerbaijan’s internationally recognized lands by a ceasefire deal in 1994.

The Nagorno-Karabakh region and seven surrounding districts of Azerbaijan are under Armenia’s occupation for almost three decades. The war catapulted serious IDP crisis in the Caspian country, displacing forcibly around one million ethnic Azerbaijanis from their homeland. Armenia has been ignoring four UN Security Council Resolutions to pull its forces back from the Azerbaijani lands, perpetuating the conflict and maintaining what are high tensions between the two post-Soviet countries.