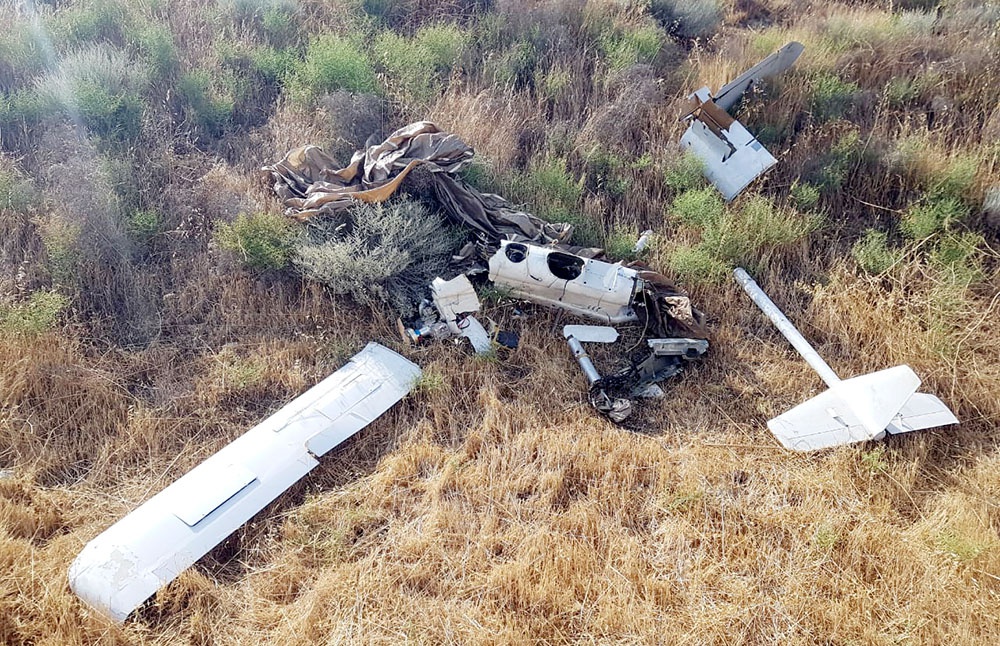 An X-55 UAV of the Armenian military downed by Azerbaijan's Air Defense units on July 16, 2020 / Ministry of Defense of Azerbaijan

The Air Defense units of the Azerbaijani army detected and downed last week another unmanned aerial vehicle (UAV) belonging to the Armenian military.

The Defense Ministry of Azerbaijan reported on August 15 that the drone was trying to conduct aerial reconnaissance over the Azerbaijani army positions located in the Tovuz district on the border with Armenia.

Tensions between Armenia and Azerbaijan boiled over after Armenia attacked Azerbaijani positions stationed in the Tovuz region on the border with Armenia on July 12. A four-day war claimed the lives of 12 Azerbaijani servicemen, including one general, and a civilian. Armenia confirmed four deaths in its army. However, the public has decried the reports of the government blaming it for hiding the true death toll. According to the country’s civil society, the loss of the Armenian army was over 30 servicemen.

Since the war on the border, Armenia’s reconnaissance UAVs have regularly been seen flying over the Azerbaijani positions. As of today, Azerbaijan’s Air Defense units have downed seven UAVs, including two drones that have been identified to be tactical X-55 flying robots.

Designed and manufactured at Armenia’s Defense Industry units, X-55 is an unmanned aircraft first presented to the public in 2015. The UAV is measured 3.8 meters in length and 50 kilograms in weight, while its maximum speed is 130 kilometers per hour. X-55 is used by the armed forces of Armenia along with three other domestically produced drones.

The two South Caucasus neighbor countries Armenia and Azerbaijan have been at odds since the late 1980s with the dramatic rise in anti-Azerbaijan sentiments in Armenia, at the center of which stood the illegal claims for Azerbaijan’s historic Nagorno-Karabakh region. Following the dissolution of the Soviet Union in 1991, of which both Armenia and Azerbaijan were part, the tensions boiled over into a full-scale war after Armenia launched military campaign against Azerbaijan.

The four-year war until a ceasefire in 1994 saw Armenia occupying 20 percent of Azerbaijan’s sovereign territory including the entire Nagorno-Karabakh region, where partial Armenian population was living side by side indigenous Azerbaijanis, plus seven surrounding districts. The bloody war claimed the lives of 30,000 ethnic Azerbaijanis, while one million were displaced forcibly from their homes amidst occupation and mass ethnic cleansing campaigns by Armenia's forces.

In 1993, the United Nations Security Council adopted four resolutions to demand immediate withdrawal of the occupying forces from Azerbaijani lands and return of internally displaced Azerbaijanis to their ancestral lands. All four legally binding documents go unfulfilled by Armenia to date.

In the early 1990s, the Organization for Security and Cooperation in Europe established the Minsk Group, a special mediation structure co-chaired by diplomats from Russia, the U.S., and France and tasked to help Armenia and Azerbaijan find a political end to the conflict. The Group’s activities failed to fetch an ultimate solution so far due to what authorities in Baku explain as the inaction of the co-chairs on Armenia's illegal occupation of Azerbaijani lands.

Despite the ceasefire agreement, Armenian forces launch regular armed attacks on Azerbaijani positions, causing both civilian and servicemen deaths. According to data compiled by the Military Prosecutor’s Office, 856 Azerbaijani servicemen have been killed and injured over 26 years since the ceasefire came into force in 1994.