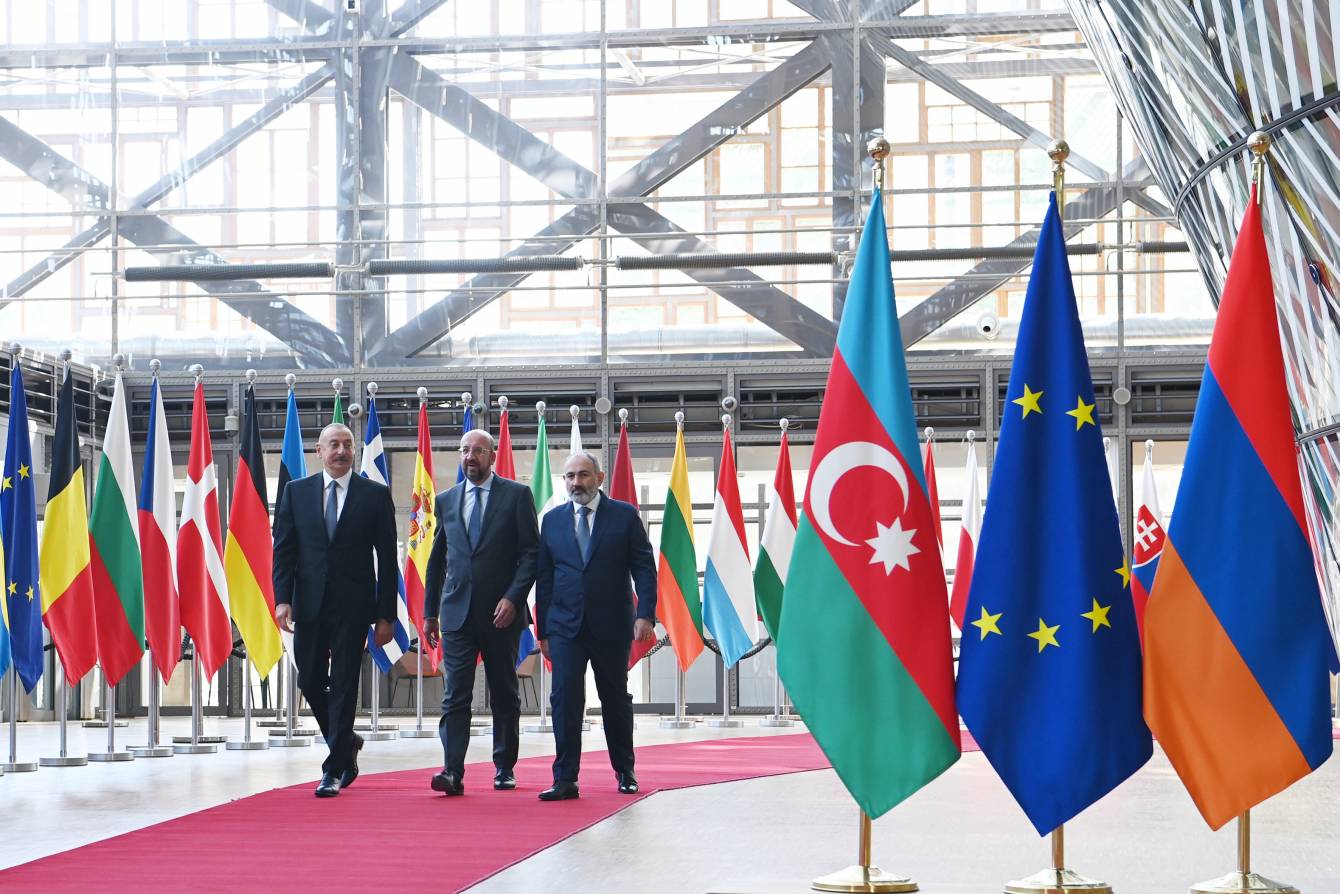 Azerbaijan and Armenia agreed in a meeting mediated by the European Council (EC) president in Brussels on Wednesday to expedite the process of normalizing bilateral relations with a peace treaty.

President Ilham Aliyev of Azerbaijan, Armenian Prime Minister Nikol Pashinyan, and the European Council President Charles Michel agreed at their recent meeting in Brussels to direct the foreign ministers of the both countries to begin drafting a peace agreement.

President Michel said in a post-meeting press statement that humanitarian issues, border issues, and connectivity were also on the agenda.

“We also had a detailed discussion on humanitarian issues, including demining, detainees and the fate of missing persons,” Michel said.

Armenia and Azerbaijan had been locked in a decades-old armed conflict over the latter’s Karabakh (Garabagh) region. Following the Soviet Union’s dissolution in 1991, Armenia launched a full-blown military aggression against Azerbaijan, marking the longest and deadliest war in the South Caucasus region. The bloody war ended with a ceasefire in 1994, which saw Armenia occupying 20 percent of Azerbaijan’s internationally recognized territories. Over 30,000 Azerbaijanis were killed, 3,890 went missing, and one million others were expelled from their lands in a brutal ethnic cleansing policy carried out by Armenia.

According to data compiled by the Azerbaijani government, 3,890 Azerbaijani citizens, including 71 children, 267 women and 326 older adults, went missing during the First Karabakh War from 1991 to 1994. Baku has demanded that Armenia assist with investigating the fate of those people, a request that remains unfulfilled.

Moreover, the Armenian military has planted anti-personnel and anti-tank landmines throughout the once occupied lands during the occupation. The Azerbaijani government is convinced that at least one million landmines exist within the territories.

On September 27, 2020, the Armenia-Azerbaijan conflict took a violent turn when Armenia’s forces deployed in the occupied Azerbaijani lands shelled military positions and civilian settlements of Azerbaijan. During the counter-attack operations that lasted 44 days, Azerbaijani forces liberated over 300 settlements, including the cities of Jabrayil, Fuzuli, Zangilan, Gubadli and Shusha, from nearly 30-year-long illegal Armenian occupation. The war ended with the signing of a tripartite statement by Armenia, Azerbaijan and Russia on November 10, 2020. Under the agreement, Armenia also returned the occupied Aghdam, Kalbajar and Lachin districts to Azerbaijan.

Azerbaijan obtained from Armenia the minefield maps of the once occupied Aghdam, Fuzuli and Zangilan districts, which reportedly identify the coordinates of a total of 189,000 anti-tank and anti-personnel mines. Armenia has also provided the Azerbaijani side with mine maps of other liberated territories of Azerbaijan. In exchange for maps, Azerbaijan released dozens of Armenian saboteurs detained in Azerbaijani territory after the ceasefire. However, Azerbaijan’s President Ilham Aliyev said the accuracy of these maps did not exceed 25 percent. The Azerbaijani president also revealed that 240 people in Azerbaijan have been trapped by landmines in the liberated lands since November 10, 2020.

The issue of delimiting inter-state borders was also discussed by Aliyev, Pashinyan and Michel during Wednesday’s meeting in Brussels. Calls for delimiting and demarcating borders have been consistently made by Azerbaijani authorities who stressed the importance of taking such necessary measures to ultimately bring the long-awaited peace to the region after the 2020 war. In February 2022, Baku submitted a proposal containing five basic principles to Armenia, which highlight the key issues related to the peace negotiations between the two countries, including the delimitation and demarcation of the state border.

Baku and Yerevan agreed in a meeting hosted by the European Council President, Charles Michel in April 2022, to set up joint working groups that should work on the issues related to the delimitation and demarcation of the Armenia-Azerbaijan borderline. On May 24, the first meeting between the border commissions of Azerbaijan and Armenia took place on the interstate border. During the meeting, Deputy Prime Minister of Azerbaijan Shahin Mustafayev, who chairs the commission, and his counterpart from Armenia, Deputy Prime Minister Mher Grigoryan reaffirmed their readiness to work on delimitation and other issues in line with the goals of the commissions.

The second meeting took place on August 30, 2022, in Moscow. EC President Michel said the third meeting would be held soon in Brussels.

“We reviewed progress on all questions related to the delimitation of the border and how best to ensure a stable situation. We agreed that the next meeting of the Border Commissions will take place in Brussels in November,” Michel said after the meeting on Wednesday, adding that President Aliyev and Prime Minister Pashinyan would visit Brussels again in November.

A significant part of the Azerbaijan-Armenia border spanning 1,007 kilometers remained out of the country’s control for nearly 30 years after Azerbaijan's Karabakh (Garabagh) region fell under the illegal Armenian occupation in the early 1990s. The restoration of Azerbaijan’s control over the border with Armenia ushered in new realities on the Armenia-Azerbaijan state border. Post-war border protection works of the Azerbaijani army have faced hostile backlash from the Armenian side since May 2021. Since then, Armenia's military conducted numerous provocations against the Azerbaijani army, resulting in serious complications on the frontier. Baku has been calling for the delimitation and demarcation of the frontiers in order to settle the recurring issues on the borderline.