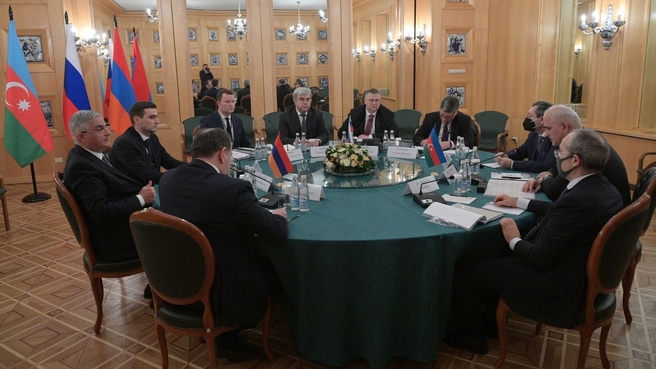 Meeting of the trilateral working group under the joint chairmanship of the Deputy Prime Ministers of the Republic of Azerbaijan, the Republic of Armenia, and the Russian Federation, January 30, 2021, Moscow, Russia / Government.Ru

The trilateral working group co-led by the deputy prime ministers of Russia, Azerbaijan and Armenia held its first meeting in Moscow last week, which ended with a decision to create expert subgroups tasked with restoring regional transportation links and ensuring security.

The group's Russian co-chair Alexei Overchuk said the parties agreed to complete the formation of expert subgroups by February 2, 2021, and hold their first meetings by February 5, 2021. According to him, the agenda of the subgroups includes issues related to railway, automobile and intermodal transport, as well as transportation, security, border, sanitary, veterinary, phytosanitary, and other types of control.

The contents of paragraph 9 of the tripartite ceasefire statement signed on November 9, 2020, and paragraphs 2, 3, 4 of the statement inked by the leaders of three countries on January 11, 2021, set the grounds for discussions in the trilateral meeting.

Paragraph 9 of the last year's document calls for the restoration of all economic and transport links in the region. It also obliges Armenia guarantee the safety of transport links between Azerbaijan's western regions and its southwestern exclave of Nakhchivan Autonomous Republic. Safety measures should be put in place to facilitate the movement of citizens, vehicles and goods in both directions. Paragraphs 2, 3 and 4 of the most recent agreement addresses the first meeting of the working group; creation of an expert subgroups; submission of a list and a schedule by the working group for the restoration and construction of new transport infrastructure facilities necessary for the organization, implementation, and security of international traffic. The traffic includes both the transportation realized through the territories of Azerbaijan and Armenia, as well as transportation carried out by these two countries, which require crossing the territories of the two neighboring countries.

Azerbaijan seeks to reconnect the country’s exclave – the Nakhchivan Autonomous Republic – with its mainland after the successful counter-offensive operations in the country’s Karabakh region. Surrounded by Armenia, Iran, and Turkey, currently, Nakhchivan is not connected via direct overland routes with mainland Azerbaijan. Nakhchivan became an exclave separated from the Azerbaijani mainland after the Soviet occupation of the South Caucasus region in 1920. Following the region’s incorporation, Soviet rulers inked a decision to transfer some of Azerbaijan's territories, including its historic region of Zangezur, which borders Nakhchivan, to the newly-created Armenian state.

Armenia’s military aggression against Azerbaijan in the early 1990s and occupation of the Nagorno-Karabakh (Daghlig Garabagh) region, which is an internationally recognized part of Azerbaijan, aggravated Nakhchivan’s isolation. All kinds of energy, electricity, and transport connections, including highways and railways to and from Nakhchivan was closed by Armenia along with the occupation of the Nagorno-Karabakh region and seven surrounding districts of Azerbaijan in a 1991-1994 war. Currently, overland and air connection with Nakhchivan is available either via Iran in the south or through Turkey in the west.

"The new corridor will release the Nakhchivan Autonomous Republic, the landlocked exclave of Azerbaijan, from the economic blockade. A direct link with Nakhchivan will shorten the travel time and will decrease transportation costs by creating new economic development opportunities for Nakhchivan and Azerbaijan," says Orkhan Baghirov, a leading advisor at the Center of Analysis of International Relations (AIR Center) in Baku.

"The Nakhchivan Corridor will create new economic opportunities for the regional countries as well. Using this corridor, Turkey will directly access Azerbaijan without using the land routes of Georgia and Iran," he noted.

Russia can also benefit from the new corridor by using its active railway connections with Azerbaijan to easily access Turkey, Iran and Armenia, Baghirov said, adding that the road could also serve as an alternative route for Russia into Middle Eastern markets.

The revival of the regional transport links comes after Azerbaijan's successful six-week-long counter-offensive operation in its Karabakh region. The latest outbreak of war started on September 27 after Armenia’s forces deployed in the occupied Azerbaijani lands shelled military positions and civilian settlements of Azerbaijan. The attacks triggered the Azerbaijani forces to take immediate counter-offensive measures for pushing back the assault.

The 44-day war ended in a tripartite ceasefire statement signed by Armenia, Azerbaijan and Russia on November 9. By this time, Azerbaijani army liberated over 300 settlements, including 5 cities in its Karabakh region, from nearly three-decades-long illegal Armenian occupation. Armenia returned the occupied Aghdam, Kalbajar, and Lachin districts to Azerbaijan by December 1 as part of the obligations it took under the ceasefire deal. Azerbaijan's President Ilham Aliyev said the victory of the Azerbaijani forces changed the status quo and reshaped the geopolitical realities in the region.