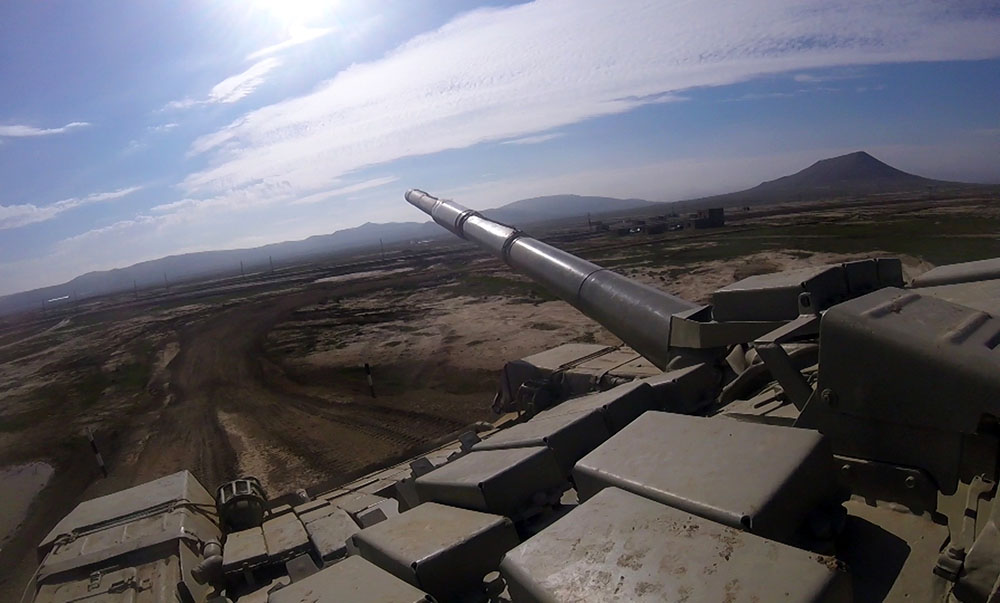 An episode from the Azerbaijani army's regular military drills on May 31, 2018 / Mod.Gov.Az

Recent negotiations meant to solve the Nagorno-Karabakh conflict between South Caucasus neighbors Armenia and Azerbaijan seem to be dead in the water amidst the Armenian prime minister’s regular calls for accepting a self-proclaimed regime in a territory that belongs to Azerbaijan and is not recognized by any country.

In his parliamentary speech on Thursday, Prime Minister Nikol Pashinyan, who rose to power in the wake of a mass protest in May that overthrew longtime Armenian politician Serzh Sargsyan, said that talks between Armenia and Azerbaijan are ineffective without the participation of representatives from the bogus “Nagorno-Karabakh Republic.”

Pashinyan is taking a different approach to addressing the longstanding conflict – one that has been simmering in the Caspian region since the twilight years of the Soviet Union, which ceased to exist by December 1991 and gave birth to 15 new countries, with Armenia and Azerbaijan being amongst them. The new Armenian leader proposes to involve the separatist regime in the Nagorno-Karabakh region into the political negotiations aiming to settle the conflict down.

Pashinyan on Thursday introduced himself as the leader of Armenia, who “has no right to negotiate on behalf of Karabakh,” according to RBK.

Officials in Baku responded to Pashinyan’s address in Yerevan with their irreversible view that changing the internationally recognized format of political dialogue is unacceptable, saying it has no legal nor moral basis. Because Baku views the separatist regime in Nagorno-Karabakh region as illegitimate, they are unwilling to include its leaders in political talks.

Hikmat Hajiyev, a spokesperson for the Foreign Ministry of Azerbaijan, said Pashinyan’s words were not constructive and effectively violated the negotiation process.

“The existence of the Armenian armed forces in the occupied territories of Azerbaijan and the continuation of the occupation are the direct international legal responsibilities of Armenia as a party to the conflict,” Hajiyev said in a written statement on Thursday.

Armenia and Azerbaijan have been at odds for more than a quarter of a century over Nagorno-Karabakh, a region that belongs to Azerbaijan but was partially populated by ethnic Armenians alongside indigenous Azerbaijanis. The existence of ethnic Armenian population there encouraged Armenia to start putting forward ethnopolitical claims to the region during the breakup of the USSR in the late 1980s and early 1990s.

The fall of the Soviet empire paved the way for the two countries to fight a war in 1991, which lasted until a ceasefire went into effect in May 1994. The results of the war included more than 20,000 Azerbaijanis killed and one million displaced. Azerbaijan’s Nagorno-Karabakh region and seven surrounding districts – Lachin, Kalbajar, Aghdam, Fuzuli, Jabrayil, Qubadli, and Zangilan, all which amount to about 20 percent of the country's lands – have been occupied by Armenia ever since.

A formal negotiating process meant to put the conflict to rest and find a peaceful solution was kickstarted in 1994, by a task force set up by the Organization for Security and Cooperation in Europe (OSCE), known as the Minsk Group. Co-chaired by representatives of the U.S., Russia and France, the group is charged with finding a solution. While it means well, the arrangement has resulted in over two decades of gridlock, much to the consternation and disappointment of leaders in Azerbaijan.

Despite regular monitoring missions by the OSCE, security along the Armenian-Azerbaijani border, and the Line of Contact (LOC) around Azerbaijan’s Nagorno-Karabakh and seven adjacent territories occupied by Armenia has been fragile. The line remains to be one of the most heavily militarized regions in the world, according to the International Crisis Group, an organization committed to preventing and resolving deadly conflicts, who says the signs of war coming back to the region are still looming.

Russia’s Foreign Minister Sergei Lavrov said in a meeting with his Armenian counterpart on Thursday that Russia’s position regarding settling the Nagorno-Karabakh conflict is in favor of resolving the issue through the OSCE Minsk Group, which he called “the optimal format.”

Lavrov added that the so-called Nagorno-Karabakh regime representation at the talks would be possible only if Armenia and Azerbaijan as parties to the conflict come to a consensus in this regard, TASS reported.

Elkhan Shahinoglu, head of the Atlas Political Research Center in Baku, said Pashinyan is bluffing in order to distract attention from the peace process.

“What comes out from Lavrov’s words is that if Azerbaijan protests, Karabakh regime's participation will not be possible. The purpose of Nikol Pashinyan is to distract attention from the process of solution. Pashinyan’s state power is weak.”