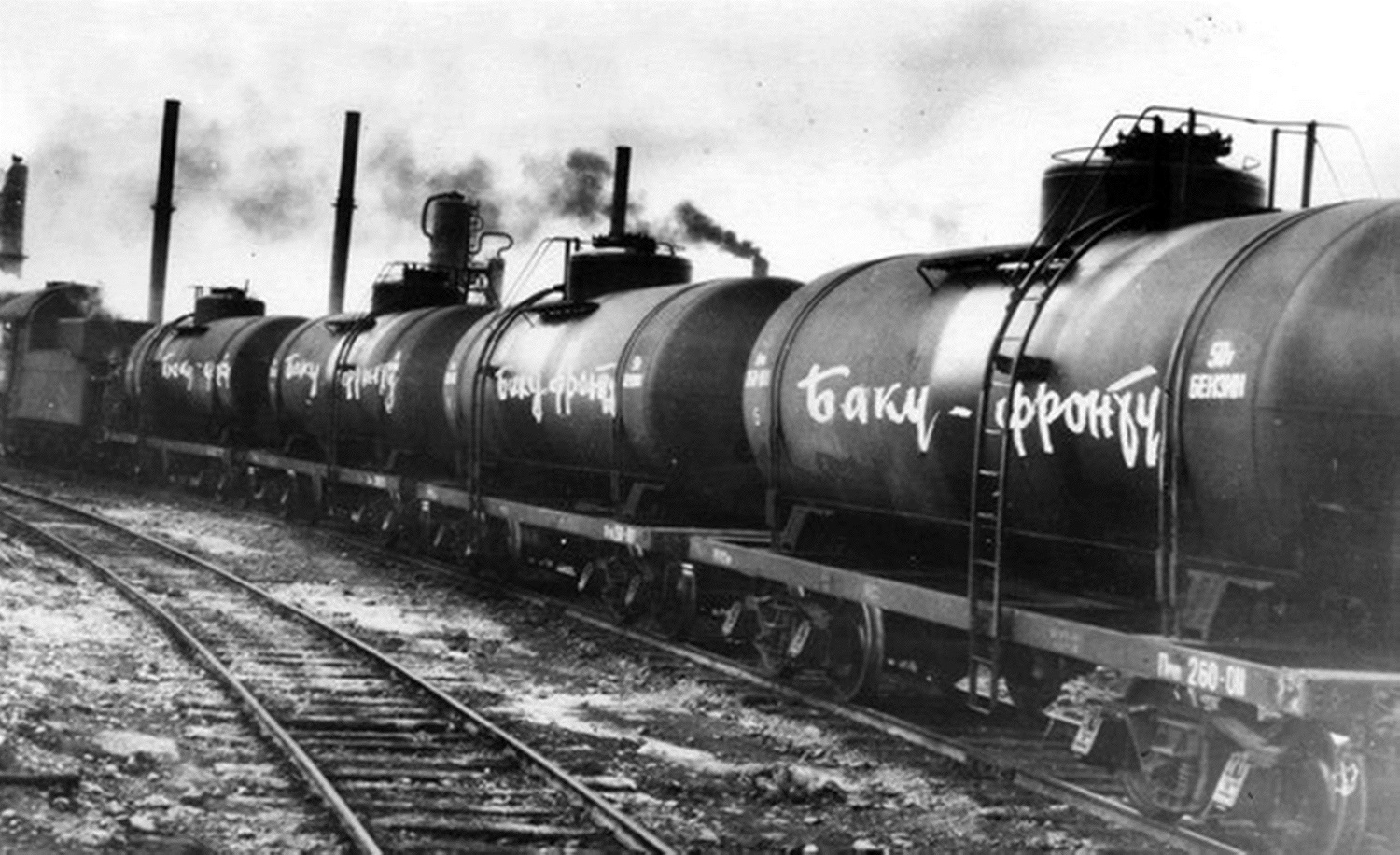 Trains carrying oil from Azerbaijan's capital Baku to the frontlines in the 1941-1945 war between Nazi Germany and the Soviet Union. Azerbaijan was the main supplier of fuel and lubricants to the Soviet army as 90 percent of lubricating oils, 80 percent of gasoline, and 70 percent of oil came from Baku / Foreign Ministry of Azerbaijan

Falling on May 9, Victory Day is a holiday commemorating the surrender of Nazi Germany in 1945. The holiday is observed in different parts of the world, including former Soviet Union republics that witnessed some of the worst horrors of World War II.

On June 22, 1941, Nazi Germany launched its largest military operation of World War II, codenamed “Barbarossa,” to invade the Soviet Union. During nearly four years of the 1941-1945 war, the Soviet Union paid the harshest price: the war claimed the lives of about 27 million Soviet citizens.

Many post-Soviet countries celebrate May 9 every year to commemorate the victims and honor the war veterans, and Azerbaijan is no exception. On Monday, Azerbaijan’s President Ilham Aliyev visited the grave of Major-General Hazi Aslanov, twice Hero of the Soviet Union and commander of a tank brigade, paying tribute to all Azerbaijanis killed during World War II.

Azerbaijan, one of fifteen republics of the former Soviet Union, made significant contributions to the victory over Nazi forces. Thanks to its military manpower, the oil, defense, chemical, mining, agricultural, transportation and healthcare sectors, Azerbaijan played its unique role in defeating Nazi Germany.

Around 700,000 Azerbaijanis were dispatched to the frontlines during the war from 1941 to 1945, and nearly half of them died in service. The 77th, 223rd, 271st, 402nd, and 416th frontline divisions of the Soviet army each consisted of Azerbaijani servicemen. The 416th division reached Berlin, from its home in the Caucasus. More than 170,000 Azerbaijani servicemen have been awarded various orders and medals, including 128 who have been honored as the Hero of the Soviet Union.

At the same time, Azerbaijan’s oil was very decisive in the victory.

During the war, Azerbaijani chemist Yusif Mammadaliyev organized the production of 38 types of fuel, eight types of diesel, and various gasoline compounds for nine types of aircraft. Mammadaliyev also prepared a new composition for another combustible mixture - the Molotov cocktail. Baku reportedly produced 10,000 Molotov cocktails per day. In addition, Mammadaliyev and his team invented the strategic high-octane jet fuel B-78. The Soviet army got over a million tons of B-78 fuel throughout the war.

Adolph Hitler was eager to capture Azerbaijan, seeking oil to strengthen the German army and weaken the Soviet Union. Baku became the primary strategic goal of Hitler's 1942 Fall Blau offensive. The German army was at first stalled in the mountains of the Caucasus, then decisively defeated at the Battle of Stalingrad (modern-day Volgograd in Russia) in 1943 and forced to retreat.

Along with fuels, Azerbaijan produced more than 130 types of weapons and spare parts throughout the war years, including the Katyusha rocket, the Shpagin machine gun, and the Yak-3 fighter jet. In addition, ships and submarines were repaired at shipyards and tanks at factories in Azerbaijan.

The role of the Baku Flotilla, railway and other transport enterprises of Azerbaijan was invaluable in providing the Soviet forces with military, fuel and other supplies from Azerbaijan.

In addition, Azerbaijan’s role as a logistics center connecting some of the Lend-Lease program’s routes was also crucial. The United States launched the program to provide its allied nations with aid and military equipment to win World War II. One of the supply routes passed through Azerbaijan. By 1943, 200,000 tons of cargo had been transported along this route.

Dozens of hospitals in Azerbaijan received servicemen with severe combat wounds for treatment. Over one million and a half servicemen were treated in those hospitals and sent back to the frontiers.

Additionally, various enterprises from Azerbaijan participated actively in the restoration of territories liberated from Nazi occupation during and after the war.

In 2015, the Heydar Aliyev Foundation released a documentary titled “Target – Baku,” which was dedicated to the 70th anniversary of the victory over Nazi Germany. The film examines the role of Azerbaijanis and the importance of Baku’s oil resources to the Soviet Union in defeating the Nazis.