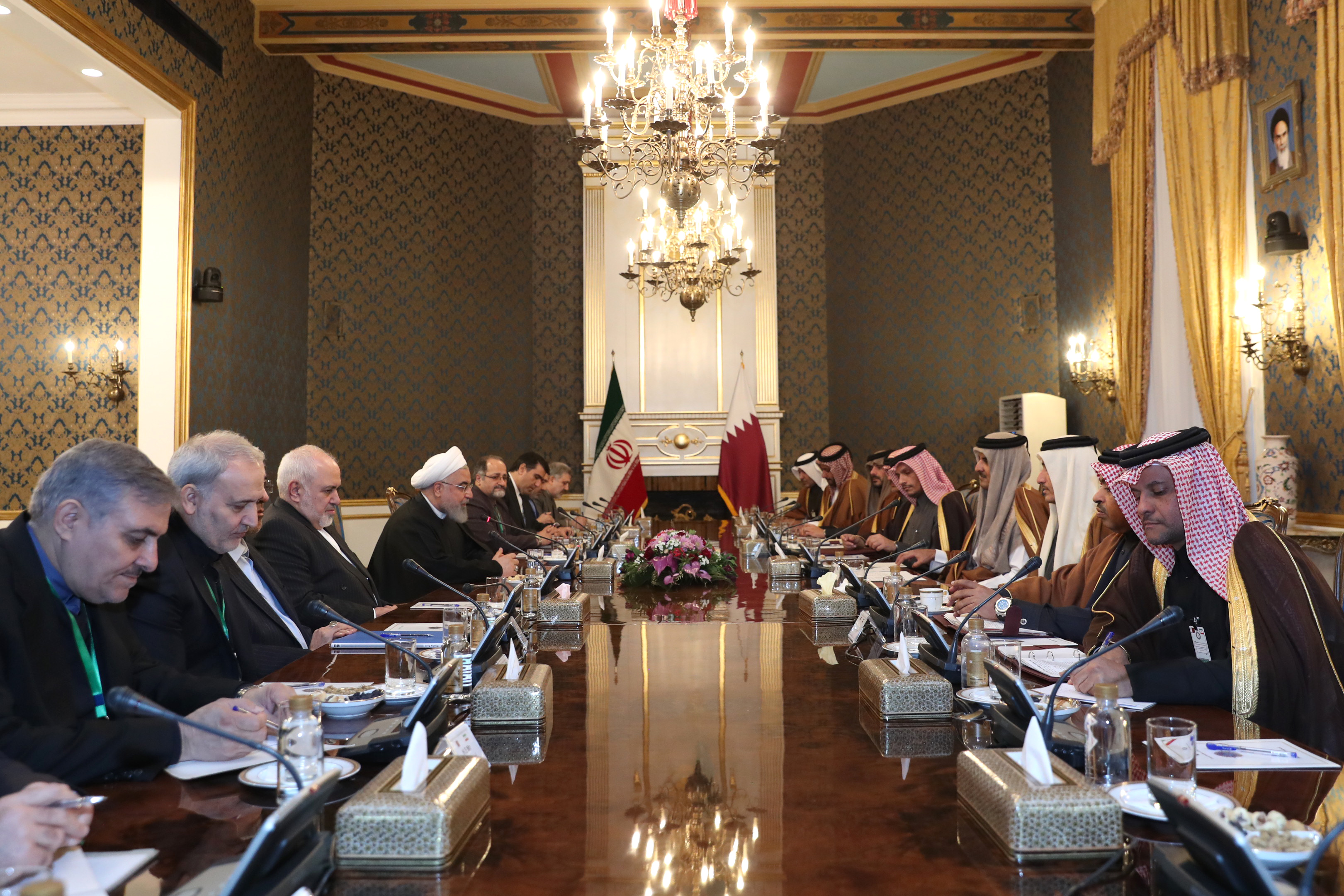 Iranian President Hassan Rouhani and Emir of Qatar Sheikh Tamim bin Hamad Al Thani discussed the bilateral trade partnership at the meeting of the high-ranking delegations of the two countries, in the capital Tehran on January 12, 2020. / president.ir

Iranian and Qatari leaders have expressed their readiness for the further expansion of bilateral economic relations, despite heavy sanctions from Washington on Iran.

"The Islamic Republic of Iran is ready to take new steps in the economic and trade relations between the two countries,” Iran’s President Hassan Rouhani said at a meeting with the Qatari Emir, Sheikh Tamim bin Hamad Al Thani, in Tehran on January 12.

Rouhani described Qatar as a friendly and brotherly country, saying it could be a base for the development of commercial, economic and maritime relations and cooperation.

At the same meeting, Sheikh Tamim said, "the friendship and relations of Iran and Qatar have developed and strengthened in recent years, and I hope this visit is a good step towards further development of Tehran-Doha relations and accelerating the implementation of agreements.”

“We believe that we should cooperate with Iran as an influential country to maintain security in this region and any security cooperation in this region without the presence of Iran is of no value," he added.

In a meeting with Tamim on the evening of January 12, Iran’s Supreme Leader Ayatollah Khamenei said, the “economic relations of the two countries are not at the level of political relations, and cooperation between Iran and Qatar should develop in all areas more than ever,” the website of the Iranian foreign ministry reported.

Tamim announced that a meeting of the Iranian-Qatari joint commission will be held in roughly three months in Iran.

Iran and Qatar have a close economic relationship, especially in the oil and gas industries. They jointly control the world's largest natural gas field, known as South Pars/North Dome, which stretches into the Persian Gulf. Qatar is producing 650 million cubic meters (mcm) of gas per day from its section of the field, while Iran is producing 430 mcm of gas per day from the field. In addition to ties in the oil and natural gas arena, the two countries also cooperate in the shipping sector.

But things have not always been rosy between the two Persian Gulf neighbors.

"I would like to once again thank the position of the Islamic Republic of Iran when we were under siege and Iran helped the Qatari nation. We will never forget these helps,” the Qatari head of state said, referring to several years ago when the small peninsular emirate appeared isolated in the Arab world.

In June 2017, Saudi Arabia, Bahrain, Egypt and the United Arab Emirates (UAE) abruptly cut off diplomatic relations with Qatar and closed land, sea and air routes to the country. Their ambassadors were withdrawn, and trade and travel bans were imposed. Meanwhile, Iran opened its airspace to about one hundred Qatari flights per day during the blockade.

Qatar had cut diplomatic ties with Tehran in January 2016, however, in a sign of solidarity with its Arab brethren in Riyadh, whose embassy in Tehran had been attacked. Despite threats by Saudi Arabia, Qatar’s foreign ministry announced in August 2017 that Doha was sending its envoy back to Tehran after a 20-month break.

Saudi Arabia’s attempt to isolate Qatar ultimately backfired and led to an improvement in Doha’s political and economic relations with Tehran. Tehran welcomed Doha’s willingness to send back its ambassador and turn down the 13-point demands made by Riyadh, vowing to provide Qatar with whatever resources and routes the Arab alliance had cut.