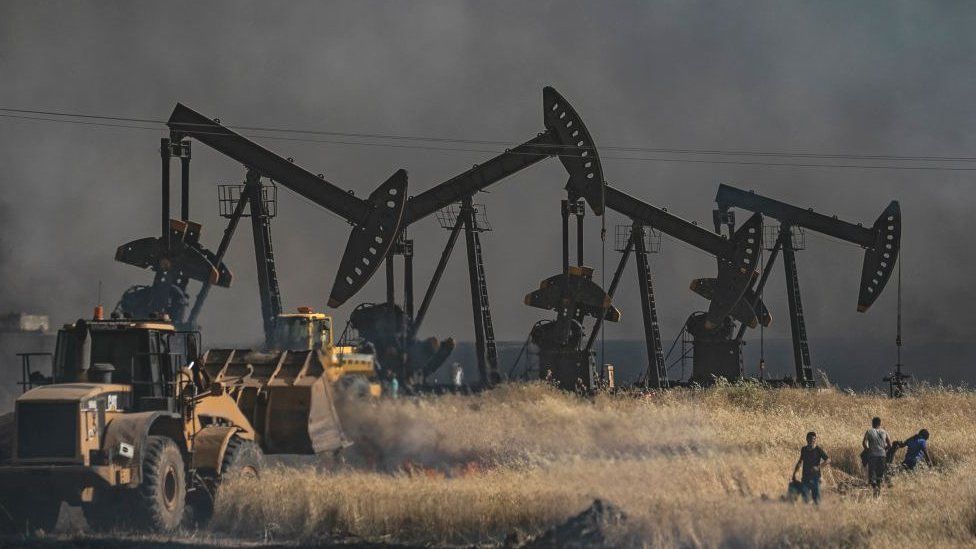 The oil and gas sector had been a crucial contributor to Syria’s economy, even though its reserves are small compared with those of other countries in the Middle East. / Getty Images

Iran, Russia, and Turkey, the guarantors of the Astana process aimed at reaching a ceasefire and political settlement to the Syria conflict, condemned the illegal seizure and transfer of oil revenues in Syria in a joint statement issued on Wednesday.

Following the talks on the Syria peace process that took place this week in the Russian city of Sochi, the Astana guarantors have reaffirmed their commitment to the sovereignty and voiced their “opposition to the illegal seizure and transfer of oil revenues that should belong to the Syrian Arab Republic.”

The oil and gas sector had been a crucial contributor to Syria’s economy, even though its reserves are small compared with those of other countries in the Middle East. According to the U.S. Energy Information Administration, as of 2015, Syria held an estimated 2.5 billion barrels of proven oil reserves, compared with Saudi Arabia’s 266 billion, Iran’s 158 billion, and Iraq’s 144 billion barrels. However, with the eruption of the ongoing civil conflict, Syria’s energy sector faced challenges as the country's oil and natural gas production has declined dramatically since then.

In mid-2013, the Syrian government lost control of much of its oil-rich territory to opposition and militant groups. In 2014, the so-called Islamic State (IS), also known as ISIS and Daesh, seized most of the oil fields located in eastern Syria, including the largest, al-Omar. According to the U.S. Department of Defense, ISIS was in control of the oil infrastructure in Syria in 2015 and was producing 45,000 barrels a day — worth about $1.5 million. In 2017, the Kurdish YPG militants, designated as terrorist organization by Turkey, took control of major oil fields in the north-east of Syria and along the Euphrates river from IS forces. Most of the oil fields east of the Euphrates remain under the control of Kurdish militant groups.

The statement issued on Wednesday further called for continued cooperation in combating terrorism in all its forms and standing against the separatist agendas in the east of Euphrates.

"[The sides] rejected all attempts to create new realities on the ground, including illegitimate self-rule initiatives, under the pretext of combating terrorism, and expressed their determination to stand against separatist agendas in the east of Euphrates aimed at undermining the unity of Syria as well as threatening the national security of neighboring countries," reads the statement published on the website of Russia’s Foreign Ministry.

Meanwhile, the recent meeting in Sochi also focused the situation in Syria’s Idlib – the last major province in north-central Syria, which remains under the control of armed groups of Syria’s opposition and Al-Nusra Front. Currently, about three million people, including one million children, are living in desperate conditions in the region.

“[The sides] reviewed in detail the situation in the Idlib de-escalation area and highlighted the necessity to maintain calm on the ground by fully implementing all agreements on Idlib,” reads the statement.

The de-escalation zone in Idlib was established in 2018 under an agreement between Russia and Turkey, both backing opposite sides in Syria’s war. Moscow supports President Assad, while Ankara placed its support behind the opposition groups in the ongoing war in Syria. In 2018, Russia and Turkey agreed to create a demilitarized zone with a depth of 15-20 kilometer along the contact line between the armed opposition and government troops. The buffer zone is meant to bring a halt to the intense fighting and avoid another wave of refugees heading to Turkey, which already hosts some 3.7 million Syrian refugees — the largest refugee population in the world.

The war in Syria first broke out in 2011 when local police responded to a series of large-scale protests in several Syrian cities, which called for the ousting of the country's President Assad. Protests and clashes quickly turned into a bloody conflict that has seen the interventions of foreign powers.

According to the guarantors, there is no military solution to the crisis and the only solution will be through a political process led and implemented by the Syrians themselves, supported by the UN, and according to the UN Security Council Resolution 2254.