Astana Denies Plans For Kazakhstan To Host U.S. Military Base 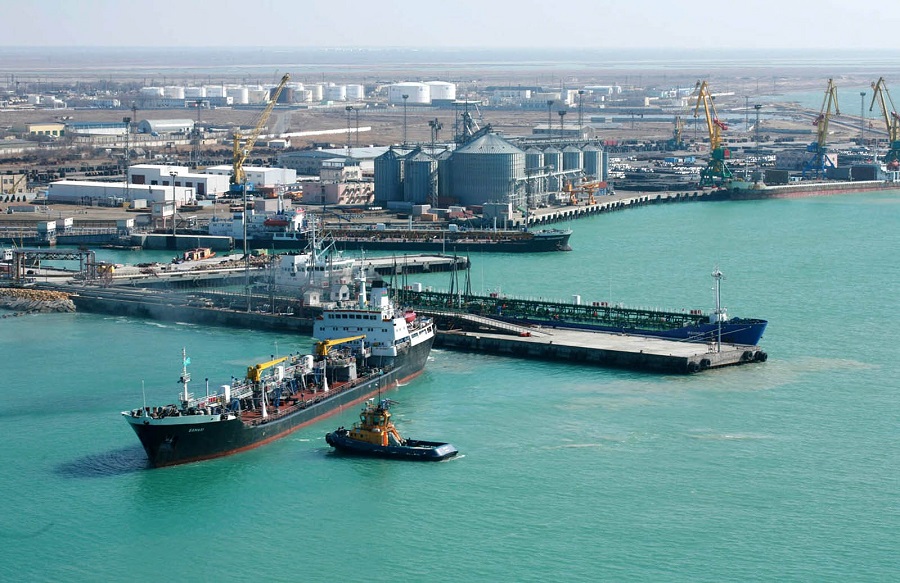 NATO allies are allowed to ship cargo to Afghanistan from Azerbaijan to Kazakhstan via the Caspian Sea, and then to land-locked Uzbekistan, using the Kazakhstani seaports of Kuryk and Aktau.

Kazakhstan’s Foreign Ministry dismissed reporting that officials in Astana are planning to allow the U.S. military to establish a base near Kazakhstan’s portion of the Caspian Sea.

Last week, during a Russian political show called “Evening with Vladimir Solovyov,” attendees and the television host himself had accused the government of Kazakhstan of allegedly allowing the U.S. to set up a base on its soil.

Kazakhstan’s foreign ministry was quick to correct the narrative.

“We would like to think that the reason for such comments is that the representatives of Russian media, as well as experts, have no information of the real situation, rather than the fact that they deliberately distorted this information,” the foreign ministry’s July 9 statement reads, according to Tengri News.

“Case in point is not the deployment of the U.S. military bases or military bases of another foreign state at the Caspian, but the commercial rail transit of the American non-military cargo through the territory of Kazakhstan to continue the operations that are essential for the international community [in terms of] supporting the government of Afghanistan,” the ministry said on Monday, according to Atameken Business Channel.

Earlier this year Kazakhstan’s Senate ratified a protocol that was supposed to make slight changes to the existing agreement between NATO and Kazakhstan inked in 2010. In accordance with the changes, NATO allies are allowed to ship cargo to Afghanistan from Azerbaijan to Kazakhstan via the Caspian Sea, and then to land-locked Uzbekistan, using the Kazakhstani seaports of Kuryk and Aktau.

Previously, the main route for material support passed through Pakistan, but due to the military and political instability and existing disagreements in bilateral relations, the U.S. side launched an alternative route.

On May 5, Kazakhstan’s President Nursultan Nazarbayev signed into law the bill. Russian media subsequently began reporting on the launch of U.S. military bases along the Caspian Sea.

Officials in Moscow reacted to Russian media reports, with some saying Kazakhstan’s actions should be cause for concern.

“We have agreed to cooperate in the Caspian, while the appearance of the armed forces belonging to the non-Caspian state is a violation of the very spirit of the agreement [on the sea],” Konstantin Zatulin, First Deputy Chairman of the State Duma Committee for CIS Affairs, said on April 25, according to News.Ru.

Zatulin had been referring to an agreement signed by leaders of the Caspian littoral states, back in 2014. In accordance with the agreement, foreign militaries are not allowed to base operations at or on the Caspian Sea.

“Given this, Kazakhstan cannot a priori allow the presence of the armed forces of third countries, let alone the deployment of their military bases at the Caspian Sea,” Kazakhstan’s Foreign Ministry said on July 9, adding that the main reason of the deal with the U.S. is that officials in Astana are interested in the stabilization of the situation in Afghanistan, to where transit cargo is being sent.

Afghanistan is a major concern for Kazakhstan given its close proximity to the country’s borders. Terrorism and activity by rogue groups operating in Afghanistan and throughout the region is seen as a serious threat to Kazakhstani peace and stability. Astana provides Afghanistan with humanitarian assistance that has totaled over $75 million since 2001 and runs programs to train Afghan youth and specialists.

According to the Foreign Ministry, “special cargo” shipped to Afghanistan is nothing more than the armored vehicles on wheels without weapons.

"A similar transit was provided earlier by Russia from 2010 to 2015, as the same cargoes passed through the territory of Russia, Kazakhstan and Uzbekistan within the Northern Distribution Network," the ministry's message reads, referring to the NATO route used to get western goods into and out of Afghanistan.

The agreement signed between Washington and Astana provides for the same conditions that were in effect in the Russian-American agreement.

"In this regard, our collaboration with the United States, including those aimed at stabilizing the situation in Afghanistan, does not devalue the significance and content of Kazakhstan’s relations with other partners and allies and not directed against third countries,” the Foreign Ministry concluded.