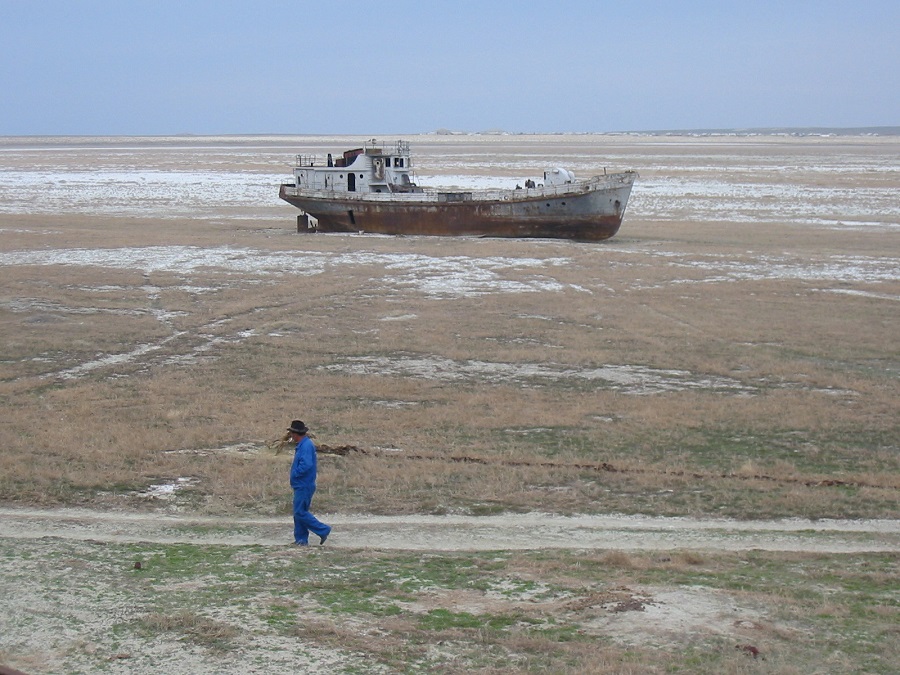 The Aral Sea, which once occupied a territory of 68,000 square kilometers (26,300 square miles) on the border between southwestern Kazakhstan and northwestern Uzbekistan, has all but completely dried up over the past 40 years. Once the fourth largest lake in the world, today its surface area measures 8,300 square kilometers (3,200 square miles), or just 12 percent of its original volume. / Wikimedia Commons

The government of Turkmenistan expressed its willingness to work towards solutions to some of the most pressing environmental issues in the Caspian region, as the 74th session of the United Nations General Assembly (UNGA) wrapped up Monday.

“We will persistently promote the idea of forming a UN Special Program for the countries of the Aral Sea basin,” Turkmenistan’s Foreign Minister Rashid Meredov said on September 28, according to a statement published to the UN website.

The UNGA’s General Debate kicked off on September 24 and wrapped up on September 30, bringing together dozens of world leaders and focusing on global challenges.

In his speech, Meredov said the issue of water management should be solved under international law, as he encouraged international organizations to get more involved in the cause.

“Water issues should be considered based on the principles of mutual respect, consent and consideration of the interests of all states located in the basins of transboundary waters, watercourses and border lakes,” Meredov said.

The high-ranking official, who flew in to New York from Ashgabat on Saturday, said the government of Turkmenistan opposes the construction of large hydraulic facilities on transboundary bodies of water because of their environmental, socio-economic and humanitarian risks.

Turkmenistan, a country that forms part of the Caspian basin and is covered largely by the Karakum Desert, is seen as a source of support and technical expertise in water usage and conservation. Experts there implement water-related projects that are of interest also to Uzbekistan and Kazakhstan, as the Aral Sea traverses the boundaries of those two countries.

The Aral Sea, which once occupied a territory of 68,000 square kilometers (26,300 square miles) on the border between southwestern Kazakhstan and northwestern Uzbekistan, has all but completely dried up over the past 40 years. Once the fourth largest lake in the world, today its surface area measures 8,300 square kilometers (3,200 square miles), or just 12 percent of its original volume.

In the 1960s, the waters of the Amu Darya River, which used to flow into the Aral, began to sink into Uzbekistan’s cotton fields – known to consume massive amounts of water. Over time, the sea split into what are now two salt lakes: the South Aral Sea or “Large Sea,” located mainly within Uzbekistan’s borders, and the North Aral Sea, also called “The Small Sea,” in Kazakhstan.

Soviet-era policies are much to blame for the problem, as they created an environmental disaster as the climate became more arid, while winters became colder as temperatures dropped by one to three degrees Celsius. In addition, the region suffers from annual windstorms that carry millions of tons of salt containing large quantities of chemical fertilizers and pesticides.

In an attempt to create a successful cotton industry, Soviet authorities ultimately ended up destroying the Aral Sea’s fishing industry. At its peak in 1957, the sea produced more than 48,000 tons of fish, but commercial harvests plummeted to zero by 1987. The water from the sea had by then receded, and today the shoreline is about 20 kilometers (12 miles) from Aralsk – formerly a fishing port and harbor city on the sea’s banks.

With the catastrophic effects of the Soviet era still lingering, the governments of now-sovereign former Soviet republics – such as Kazakhstan, Turkmenistan and Uzbekistan – are doing something about it and help stop the total disappearance of the Aral Sea.

Kazakhstan was the first country to come to grips with the environmental disaster. In 1992, engineers erected a bulk dam in the Berg Strait to maintain the water level, but in less than 10 years it washed away. Later, a more modern construction was built, which successfully helped maintain water levels in the northern Aral. The central government allocated $85 million for the construction of the dam, which is designed to conserve water flowing from the Syr Darya river. As a result, the fish population had repopulated in this part of the sea.

In 1993, five countries in the region — Uzbekistan, Kazakhstan, Kyrgyzstan, Tajikistan, and Turkmenistan — created the International Fund for Saving the Aral Sea. Since then, hundreds of efforts have been undertaken to help eliminate the consequences of the sea’s disappearance. Uzbekistan, for example, planted protective plantations of Haloxylon and other salt-tolerant plant species in about 350,000 hectares in areas that once formed the seabed.

But the issue of eliminating the consequences of environmental disaster is far from being resolved.

“The tragedy of the Aral Sea and the crisis have shown themselves so deeply that we can only talk about the first steps in the rehabilitation of this lake-sea,” Vladimir Tetelmin, a lecturer at the Peoples’ Friendship University of Russia said in an interview with Sputnik.

“The sea used to slop and fed two republics. But growing cotton has been and remains a budget-forming industry [for Uzbekistan], and for every ton of cotton 10,000 tons of water are consumed. Therefore, the problem is practically not solved,” he added.