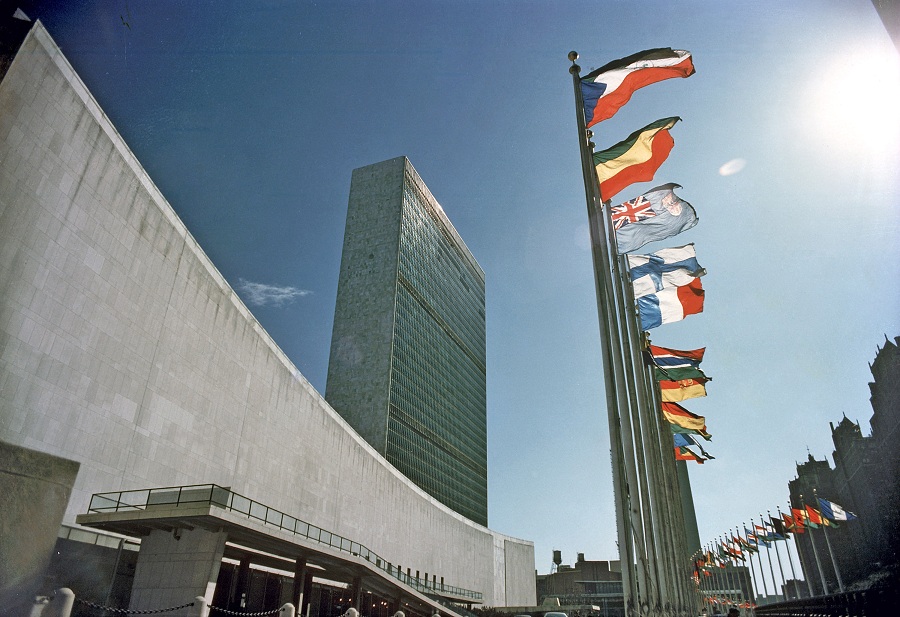 Today the United Nations celebrates the 72nd anniversary of the organization’s founding. On October 24, 1945, following the end of World War II, the multinational body was created with the aim to establish international peace.

Since 1948, October 24 has been celebrated as United Nations Day. In 1971, the UN General Assembly called upon the Member States to observe the day as a public holiday.

Maintaining international peace and security, and providing humanitarian aid in times of famine, natural disasters, and armed conflict are all roles the UN has come to play over its more than seventy decades of existence.

As one of the UN’s 193 member states, Azerbaijan has been an active member of the international body since the modern republic’s founding following the collapse of the Soviet Union.

Azerbaijan was admitted into the organization on March 2, 1992, less than five months after its announcement of the independence from the Soviet Union. At that time, two countries, both created as a result of the USSR collapse, were in open conflict over the Nagorno-Karabakh region of Azerbaijan.

The war, which lasted from 1992 until 1994, morphed into a serious humanitarian crisis that created more than one million refugees and internally displaced persons (IDPs) in Azerbaijan. More than 30,000 Azerbaijanis were killed, while another 4,000 were estimated to have been taken captive, held hostage, or went missing.

Since 1993, the government of Azerbaijan and the United Nations High Commissioner for Refugees (UNHCR) have worked in a close cooperation to alleviate the social and humanitarian conditions of the refugees and IDPs that were created as a result of the war that started a quarter of a century ago.

“The UN adopted four resolutions in regard to the Armenia-Azerbaijan Nagorno-Karabakh conflict,” Hajiyev noted, referring to the legally binding UN Security Council resolutions, adopted between April and November 1993. The resolutions confirm the territorial integrity of Azerbaijan, demand an immediate ceasefire, call for Armenia to withdraw its forces from the Nagorno-Karabakh region and the surrounding districts it subsequently occupied, and to allow refugees and IDPs to return to their homes.

“The mandate of these resolutions, and the principles that are defined by these resolutions, create the grounds for resolving the conflict,” Hajiyev said. The conflict is still far from its settlement, due to a regular escalation of hostilities triggered by Armenia breaking the 1994 ceasefire.

“Azerbaijan has, and will always have, expectations from the UN in regard to Nagorno-Karabakh, as long as the occupation of its Nagorno-Karabakh region by Armenia continues,” Velizade told Caspian News.

In October 2011, Azerbaijan was elected by the General Assembly to the 15-member UN Security Council, as a non-permanent member, for a two-year term. Azerbaijan presided over the Security Council from May 1 to June 1 in 2012, during which the UN held 13 open and 16 closed meetings, adopted two resolutions on the Heglig crisis in Sudan, and adopted one resolution on the military coup in Guinea-Bissau.

While it no longer occupies a seat on the Security Council, Azerbaijan still works towards the UN’s goals. Azerbaijan is meeting its obligations under the UN Millennium Development Goals program, which works to eradicate extreme poverty and hunger, promote gender equality and combat HIV/AIDS.

The poverty rate amongst its population of nearly 10 million, bringing it down from 68 percent in 1995 to 49 percent by in 2001, according to data provided by the UN Statistics Division. Today, only five percent of the population is classified as being poor, according to President Ilham Aliyev, who highlighted the point in his speech at the D-8 summit in Istanbul on October 19.