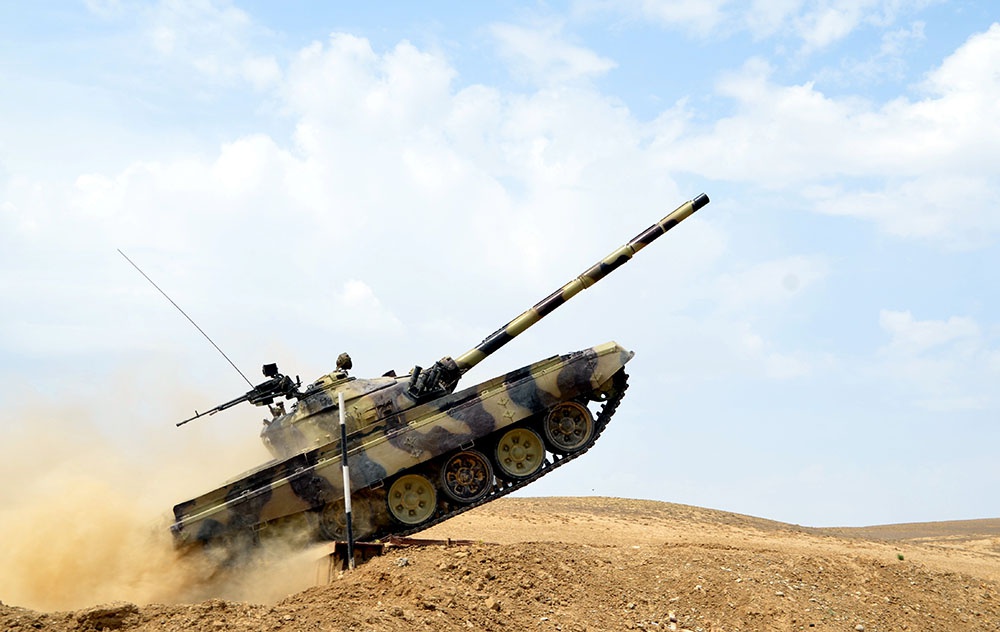 A photo from the tank competition held by the Azerbaijan armed forces on June 24, 2020 / Ministry of Defense of Azerbaijan

Armenia recently changed its point of attack on Azerbaijan from the Line of Contact between the troops of the two countries in Azerbaijan's occupied Nagorno-Karabakh region to the Armenia-Azerbaijan border where it launched heavy artillery fire on July 12.

The far western Tovuz region of Azerbaijan located on the border with Armenia has become a hot spot for intense clashes between the two countries. The fact that Armenia assaulted Azerbaijan far from the main conflict zone in the Nagorno-Karabakh region raised questions about Yerevan's intentions.

An aide to the President of Azerbaijan, Hikmat Hajiyev suggested that Armenia is trying to involve third parties into the Nagorno-Karabakh conflict and hide its acts of aggression.

Armenia is a member state of the Collective Security Treaty Organization (CSTO) along with Russia, Belarus, Kazakhstan, Kyrgyzstan and Tajikistan. Some analysts in Azerbaijan believe that by switching the attacks from the contact line in Azerbaijan's occupied lands to border, Armenia deliberately aims to activate the involvement of CSTO in the conflict. Any hostilities in the Nagorno-Karabakh region and surrounding districts occupied by Armenia bypass the alliance's jurisdiction since the occupied lands are acknowledged as part of Azerbaijan’s internationally recognized territories.

For resorting to the Article 4 of the CSTO Charter, under which an attack on a member state is designated as an attack against all members, Armenia’s Foreign Minister Zohrab Mnatsakanyan held a phone conversation with CSTO Secretary General Stanislav Zas. Following the discussions, the secretary general announced that the organization would convene an emergency meeting, however, plans for conference were later put on hold due to what was explained as the need for identifying the discussion format.

Clashes on the Armenia-Azerbaijan border broke out on July 12 after heavy artillery fire by Armenia on Azerbaijani positions in the western Tovuz region of the country. The bloody skirmishes continued until the late hours on July 14. As a result of the hostilities, eleven servicemen of the Azerbaijani army, including one general was martyred by the Armenian troops. Starting on July 13, Armenia's military targeted civilian villages in Azerbaijan, killing one resident and damaging tens of houses by heavy artillery fire.

Armenian Defense Ministry confirmed the deaths of four servicemen and injuries of fifteen more. However, the ministry is accused of misleading the community by reporting the casualties deliberately less. Social media users in Armenia claim that the death toll in the Armenian army exceeds 30, including seven high ranking officers.

Meanwhile, residents in Tovuz claim that Armenian troops attempted to capture the Garagaya military post near the district's Aghdam village that was targeted by heavy weapons on July 14 leading to the death of one civilian. They say if the post is captured, the Armenian army could be able to control a strategically important highway stretching from Azerbaijan's second-largest Ganja city to the border with Georgia within a radius of 25 kilometers. Armenia was also planning to gain control over the oil, gas and railway routes passing through the territory.

Tovuz is located in a strategically significant area along the routes of the Baku-Tbilisi-Kars railway, Baku-Tbilisi-Ceyhan oil pipeline, and the Southern Gas Corridor, a megastructure that carries natural gas from Azerbaijan to Turkey and Europe through the territory of Georgia, which locates 78 kilometers west from Tovuz.