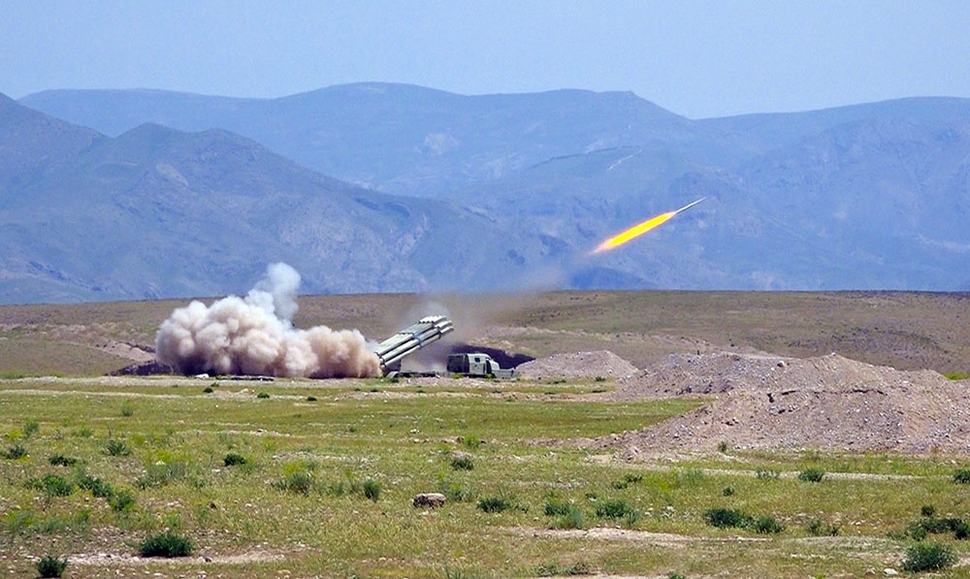 Armenia's armed forces have shelled positions of the Azerbaijani armed forces and civilian settlements along the front zone in the Nagorno-Karabakh region — which is internationally recognized as part of Azerbaijan but occupied by Armenia — using large-caliber weapons, mortars, and artillery mounts of various calibers. / Ministry of Defense of Azerbaijan

Heavy clashes have broken out between Armenia and Azerbaijan after Armenian armed forces attacked Azerbaijani positions and civilian settlements along the front zone in the occupied Nagorno-Karabakh region, Azerbaijan’s defense ministry reported on Sunday.

According to a statement issued by the ministry, the armed forces of Armenia have shelled positions of the Azerbaijani armed forces and civilian settlements along the front zone in the Nagorno-Karabakh region — which is internationally recognized as part of Azerbaijan but occupied by Armenia — using “large-caliber weapons, mortars, and artillery mounts of various calibers.”

“There are reports of civilian and military casualties,” said Hikmet Hajiyev, the head of the foreign policy affairs department within the Presidential Administration of Azerbaijan.

The Azerbaijani Army had to take countermeasures along the frontline to suppress the combat activity of the armed forces of Armenia. At the same time, Azerbaijan’s Defense Ministry rejected Armenian media reports claiming that the Azerbaijani armed forces allegedly deliver pinpoint strikes on civilian targets. The Ministry has also called for the civilian population in the occupied territories to stay away from military facilities.

“We officially announce that the Azerbaijan Army does not target the civilian population, civilian facilities, and civilian infrastructure,” the ministry’s statement reads, adding that Azerbaijan complies with the international humanitarian law, including the Geneva Conventions.

The government of Armenia has already declared the martial law in the country and total military mobilization, Armenian Prime Minister Nikol Pashinyan wrote on Facebook.

Armenia and Azerbaijan have been at odds since the late 1980s with the dramatic rise in anti-Azerbaijan sentiments in Armenia, as well as Armenia’s illegal claims to Azerbaijan's historic Nagorno-Karabakh region. These sentiments transitioned into a full-blown military campaign in 1991, when Armenia launched an attack on Azerbaijani lands. A four-year bloody war between the two neighbor countries ended with a ceasefire in 1994, which saw Armenia occupying 20 percent of Azerbaijan's sovereign territory, including the entire Nagorno-Karabakh region and seven surrounding districts. Over 30,000 ethnic Azerbaijanis fell victim in the war, while one million were forced to leave their homes.

Meanwhile, talks to resolve the long lasting conflict have been largely stalled since 1994 when the ceasefire agreement was inked.

In the early 1990s, the Organization for Security and Cooperation in Europe established the Minsk Group, a special mediation structure co-chaired by diplomats from Russia, the U.S. and France and tasked to help Armenia and Azerbaijan find a political end to the conflict. The Group’s activities failed to produce a lasting solution so far due to what authorities in Baku explain as the inaction of the co-chairs on Armenia's illegal occupation of Azerbaijani lands.

In July 2020, tensions between Armenia and Azerbaijan have led to short, but deadly skirmishes after Armenian armed forces opened fire on Azerbaijani positions. In addition to targeting civilian settlements during the fatal clashes, Armenia’s military threatened to hit Azerbaijan’s largest hydropower station located in the central city of Mingachevir. Heavy clashes killed 12 servicemen and one civilian in Azerbaijan.

Amid tensions that spiraled after July clashes, multiple sources claim that dozens of PKK terrorists trained in sabotage in Iraq and Syria were transferred by Armenia to the occupied Nagorno-Karabakh region of Azerbaijan. Turkish media reports of the transfer of PKK terrorists have been confirmed by an Egyptian news portal. The Cairo-based media outlet Cairo 24 published an article that revealed new details about the deployment.

The first PKK militant group brought to Armenia's army consists of 25 people. They are trained at the PKK camp in Qandil mountains on the Iran-Iraq border. The group is said to have specialized in military training and sabotage operations. There are currently two more PKK groups in Iran and Syria awaiting transition to Armenia's armed forces. The first consists of 250 militants from YPG, an outgrowth of PKK in Syria.

After the July clashes Prime Minister Pashinyan proposed the illegal separatist regime deployed in the occupied Azerbaijani lands should participate in the Armenia-Azerbaijan talks as a separate party. The proposal listed among seven “conditions” set forward by the Armenian prime minister prompted reaction from Baku.

“I have said that we are rejecting these preposterous conditions. We have only one condition – they must withdraw from our lands unconditionally and completely. It is reflected in UN Security Council resolutions,” President Aliyev said on September 19.