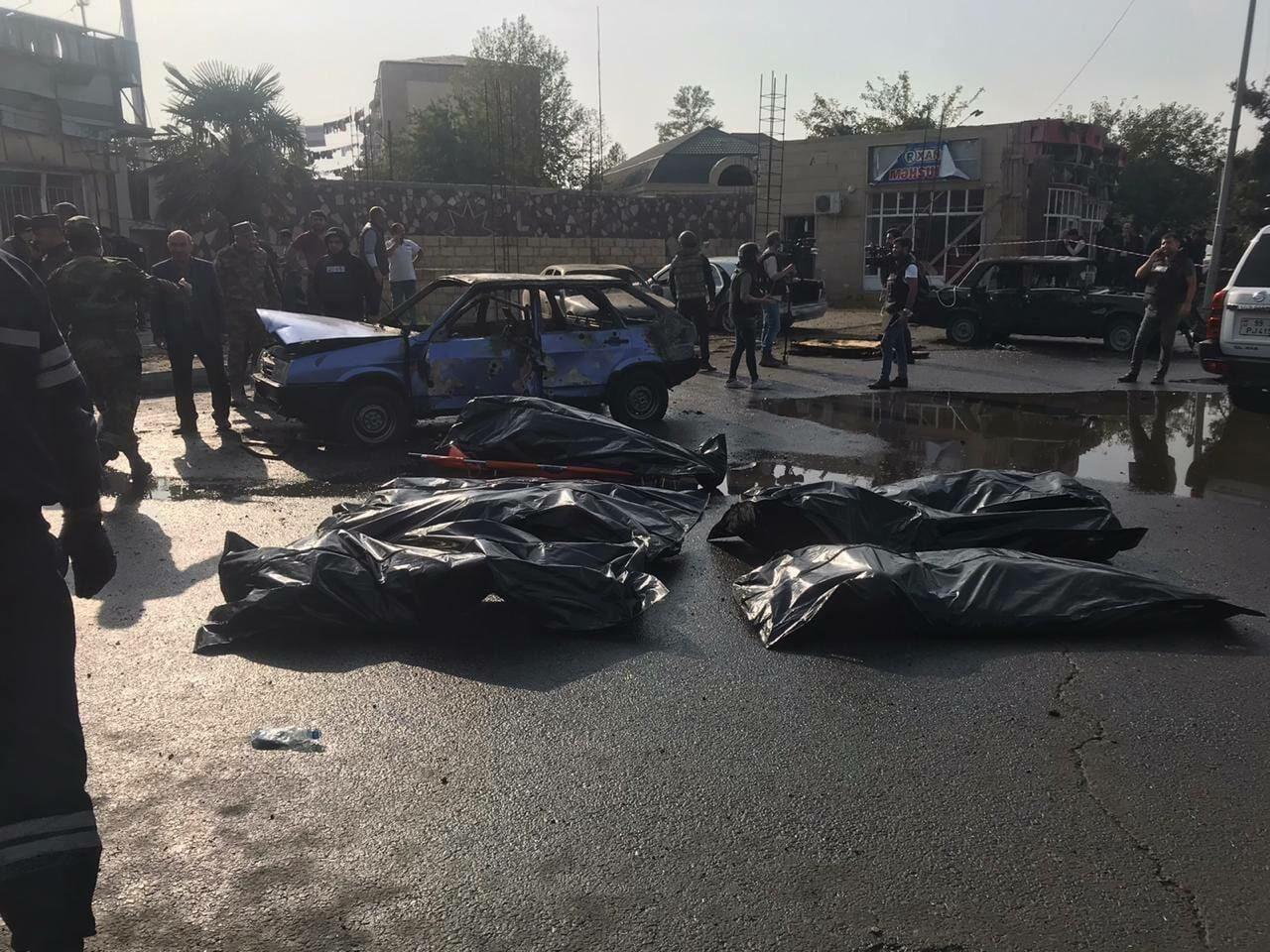 Armenia's forces killed 21 civilians and wounded 70 others in the Barda city of Azerbaijan in the wake of the second missile attack on the city on October 28, 2020 / Courtesy

Less than a day after killing five civilians with missile fire in the Barda city of Azerbaijan on Tuesday, Armenia's armed forces shelled the city again on October 28 with prohibited cluster bombs claiming the lives of dozens.

Armenian troops hit the densely populated city center to kill 21 civilians, including children, and wound 70 others, according to a statement issued by the Prosecutor General's Office of Azerbaijan. Civilian infrastructure in Barda, including a hospital and a trade center suffered serious damages.

Azerbaijan National Agency for Mine Action (ANAMA) reported that the city was shelled with Russia-made 9M525 Smerch rockets. 9M525 is a missile with cluster warhead, curb militant splinter cell type. It contains 75 pieces of 9N210 fragmentation bombs. The use of Smerch missiles is prohibited.

Hikmat Hajiyev, senior aide to the president of Azerbaijan, has confirmed the use of prohibited cluster bombs in the attacks on Barda.

"Armenia used cluster munitions to inflict excessive casualties among civilians. It is policy of state terror by Armenia," he said, adding Armenian army's shelling the city center of Barda, which is located about 50 kilometers from the battlefield in Azerbaijan's Karabakh region, is a war crime.

A cluster munition, or cluster bomb, is a weapon that contains multiple explosive submunitions. Cluster munitions are dropped from aircraft or fired from the ground or sea, opening up in mid-air to release tens or hundreds of submunitions, which can shell an area up to the size of several football fields. The international Convention on Cluster Munitions (CCM) treaty addresses the prohibition of the use, transfer, and stockpiling of cluster bombs. As of September 2020, 123 states have committed to the goals of the Convention, of which 110 have become States Parties and 13 are Signatories.

Wednesday's attack on Barda followed the missile fire by the Armenian troops on the city a day before on October 27, when at least 5 civilians were killed and 13 were injured. On October 26, a humanitarian ceasefire brokered by the United States came into force between Armenia and Azerbaijan. Similar to two previous Russia-mediated truces on October 10 and 17, Armenia has blatantly violated the last armistice, as well, to hit civilians.

The fighting between Armenia and Azerbaijan sparked on September 27 after heavy shelling of Azerbaijani military and civilian positions by Armenia's armed forces deployed in the occupied Azerbaijani lands. The uninterrupted bombardment triggered immediate counter-attack measures from the Azerbaijani military to push the Armenian offensive back. Intensive deployment of military materiel and personnel to the frontline by both sides transitioned the fighting into the largest-scale clashes between the sides since a ceasefire reached in 1994.

Armenia has regularly targeted civilian settlements, including hospitals, schools, residential buildings, a police station, a cotton plant, a hydropower station, and energy pipelines in multiple cities of Azerbaijan since the start of hostilities. Armenia's forces killed 90 civilians and wounded around 400, while destroyed and damaged over 2,300 houses, 92 multi-apartment residential buildings, and 415 civil facilities as of October 29.