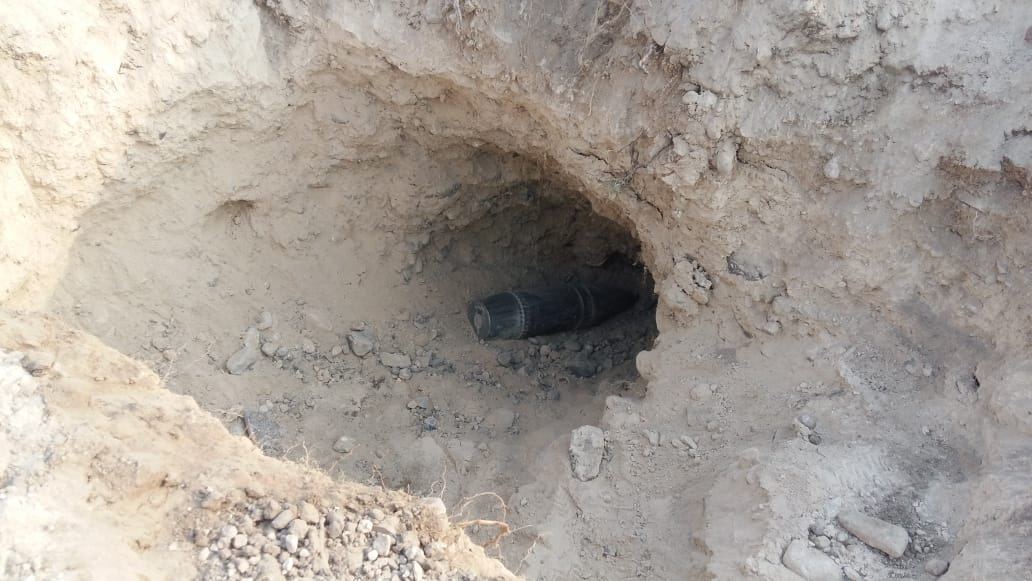 Two white phosphorus bombs were dropped by Armenia's troops on Tartar on Tuesday. The munitions hit an empty area in the Sahlabad village without exploding.

Armenia's forces used prohibited white phosphorus bombs in recent attacks on the Tartar city of Azerbaijan located near the Nagorno-Karabakh region, which is the internationally recognized territory of Azerbaijan but occupied by Armenia.

According to local media reports, two white phosphorus bombs were dropped by Armenia's troops on Tartar on Tuesday. The munitions hit an empty area in the Sahlabad village without exploding. The Azerbaijan National Agency for Mine Action (ANAMA) have located and neutralized the explosive devices on the ground.

Before the Tartar district, Armenia's army launched white phosphorus projectiles on the Fuzuli district on October 8.

White phosphorus is a highly flammable incendiary material, which ignites when exposed to oxygen. The chemical substance flares in spectacular bursts with a yellow flame when fired from artillery shells and produces dense white smoke. It serves as a smokescreen for troop movements and to illuminate a battlefield.

White phosphorus has a significant, incidental, incendiary effect that can cause severe damages to humans and civilian objects in the vicinity. Human Rights Watch say the infection from white phosphorus is common and the body’s absorption of the chemical can cause serious damage to internal organs, as well as death. It could lead to destructive effects on the environment and may remain within the deep soil for several years without any changes.

The international law outlines white phosphorus as an incendiary weapon, defined by Protocol III of the Convention on the Prohibition of Use of Certain Conventional Weapons as “any weapon or munition which is primarily designed to set fire to objects or to cause burn injury to persons through the action of flame, heat or combination thereof, produced by a chemical reaction of a substance delivered on the target.” The protocol prohibits using air-delivered incendiary weapons against military targets located among civilians, and limits the use of incendiary weapons delivered by other means.

Hikmat Hajiyev, senior aide to the president of Azerbaijan, said Armenia's use of white phosphorus munitions contradicts the international conventions to which it is a party. Armenia has an obligation not to use such weapons. Hajiyev added that main purpose of Armenia's use of such weapons is to inflict damages on the Azerbaijani Armed Forces and civilians. He went on to call on the international community to take the issue into a serious consideration.

The fighting between Armenia and Azerbaijan began on September 27 after Armenian troops deployed in the occupied Azerbaijani lands shelled military positions and civilian settlements of Azerbaijan. The uninterrupted bombardment triggered counter-attack measures by the Azerbaijani army to push back Armenia's offensive. Intensive deployment of military materiel and personnel to the frontline by both sides transitioned the fighting into the largest-scale clashes between the sides since a ceasefire reached in 1994. Since the start of hostilities to date, the Azerbaijani army has liberated the occupied cities of Jabrayil, Fuzuli, Zangilan and Gubadli, as well as dozens of villages, settlements and strategic heights in the districts of Tartar, Fuzuli, Jabrayil, Khojavend, Zangilan, Gubadli and Kalbajar.