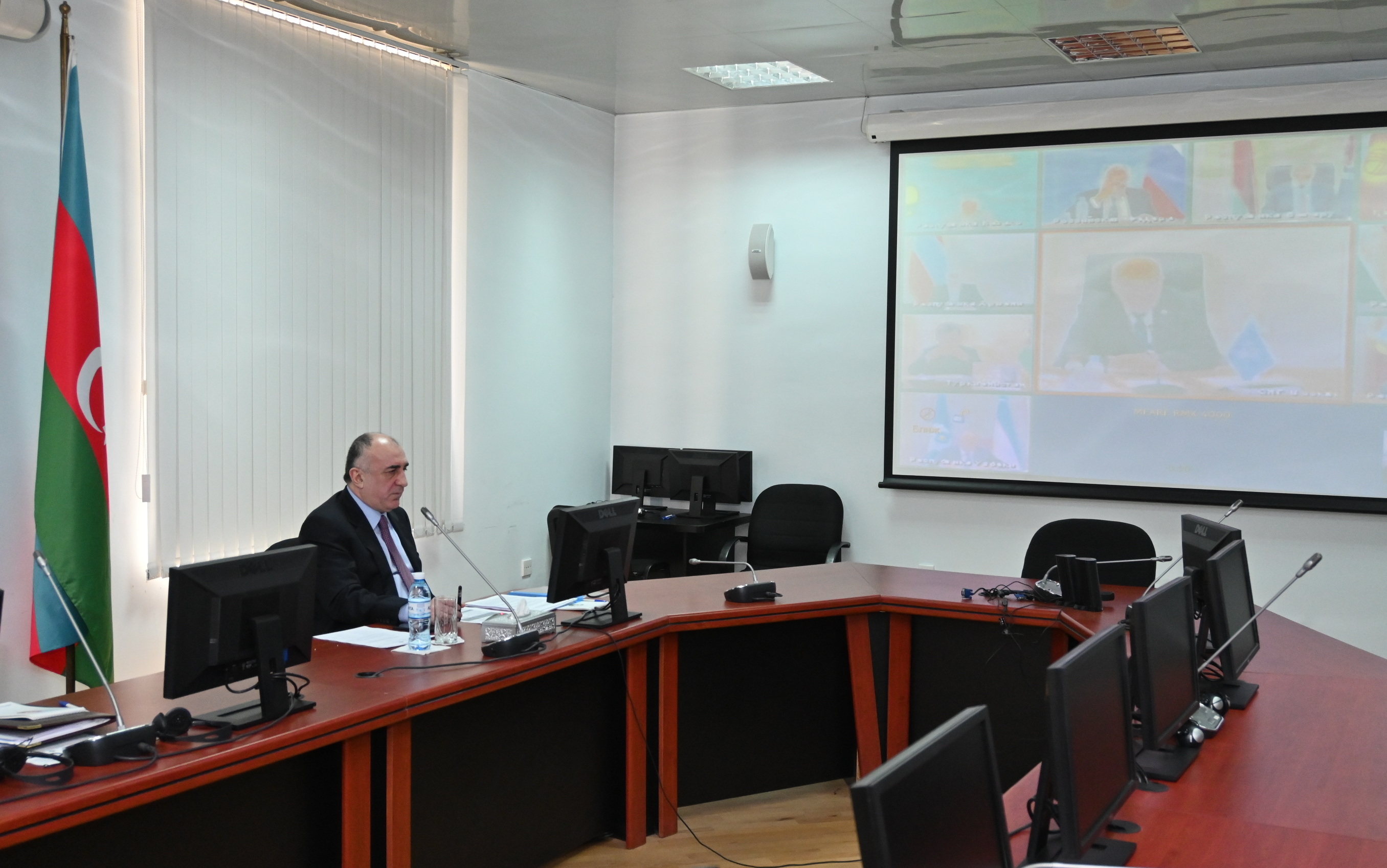 At a virtual meeting of the Council of the Foreign Ministers of the Commonwealth of Independent States (CIS) this week, Azerbaijan’s Foreign Minister Elmar Mammadyarov drew parallels between the Nagorno-Karabakh conflict and the limited ability of CIS member nations to respond to new challenges and threats.

The minister highlighted the long-standing Armenia-Azerbaijan conflict as one of the main obstacles to the progress achieved by CIS countries - the nine post-Soviet nations of Azerbaijan, Armenia, Russia, Belarus, Moldova, Kazakhstan, Kyrgyzstan, Tajikistan, and Uzbekistan.

“The realities prevailing today in the world require effective interaction and coordination of efforts of all states in countering new challenges and threats to stability and security,” Mammadyarov said in a statement published on the Azerbaijani Foreign Ministry’s website.

“However, the unresolved conflicts existing in the Commonwealth space, in particular the Armenia-Azerbaijan Nagorno-Karabakh conflict, do not allow to fully and effectively realize the integration potential within the Commonwealth and are the main obstacle to closer interaction of the CIS member states in countering new challenges and threats," the minister explained.

Mammadyarov blamed Armenia’s government for disrupting the negotiations that aim to resolve the Nagorno-Karabakh conflict. He referred to recent statements of Armenia’s leadership, including the prime minister’s remarks in the occupied Shusha city of Azerbaijan on May 9, adding that the “Armenian side is doing its best to impede the activation of the process of peaceful settlement of the conflict, thereby creating new threats to regional stability and security.”

Armenia’s Prime Minister Nikol Pashinyan traveled to the occupied Nagorno-Karabakh region of Azerbaijan to celebrate the 75th anniversary of the victory over Nazi Germany on May 9. In his address, he has tried to justify the occupation of the Azerbaijani city of Shusha, which, according to him, "marked the beginning of the liberation of Nagorno-Karabakh."

Officials in Yerevan have on several occasions attempted to portray the illegal separatist regime in the occupied Azerbaijani lands as an “independent state” despite no country in the world, including Armenia itself, recognizing it as independent state.

Armenia occupied the internationally recognized territories of Azerbaijan in the wake of a war that broke out in the early 1990s following the dissolution of the USSR. Initial aggressive sentiments of Armenia against Azerbaijan eventually led to a full-fledged military campaign in 1991, when Armenia’s forces advanced on the latter’s borders. The full-fledged war continued until a ceasefire was reached in 1994, despite the call of the international community and four UN Security Council resolutions in 1993 to cease hostilities.

The outcomes of Armenia’s bloody offensive were literally dramatic for Azerbaijan, which saw the occupation of its Nagorno-Karabakh region and seven surrounding districts, comprising 20 percent of Azerbaijan’s internationally recognized territory. More than 30,000 ethnic Azerbaijanis were killed during the war, while one million people were displaced. Withdrawal of Armenia's occupying forces from the Azerbaijani lands and return of the displaced Azerbaijanis to their home as clearly defined terms of the UN resolutions have yet to be fulfilled.

“Azerbaijan is committed to an early political settlement of the conflict. At the same time, negotiations cannot last forever and should not serve for continuing and maintaining the situation that arose as a result of the use of force, occupation, and ethnic cleansing,” Mammadyarov said during the virtual meeting.

“The earliest settlement of conflicts based on the sovereignty, territorial integrity, and inviolability of the borders of states will undoubtedly contribute to strengthening regional and international security, social progress, and economic cooperation in the region,” the minister added.

In response to Azerbaijan’s efforts to seek a quick solution to the conflict, Armenia’s leadership is fueling tensions with consecutive contradictory remarks. Prime Minister Pashinyan said in Azerbaijan’s occupied Shusha city last week that the Armenian forces have fought for the “liberation of the Armenian people” in the war with the Azerbaijani troops in April 2016, the deadliest phase of the war in the Nagorno-Karabakh region since the 1994 ceasefire.

As a result of Armenia’s sudden midnight shelling of the Azerbaijani civilian settlements, the four-day war, known as April War, began four years ago. Before a ceasefire was brokered by Russia on April 5, Azerbaijani forces liberated 2,000 hectares (approximately 5,000 acres) of territory alongside several strategically important locations that were previously occupied by Armenia.

While Premier Pashinyan claims it to be a “liberation war” from Armenia’s end, his spouse, Anna Akopyan has earlier contradicted the Armenian leader by saying in the anniversary of the April War in 2019 that “thousands of Armenian soldiers gave their lives in Karabakh in the name of nothing.”