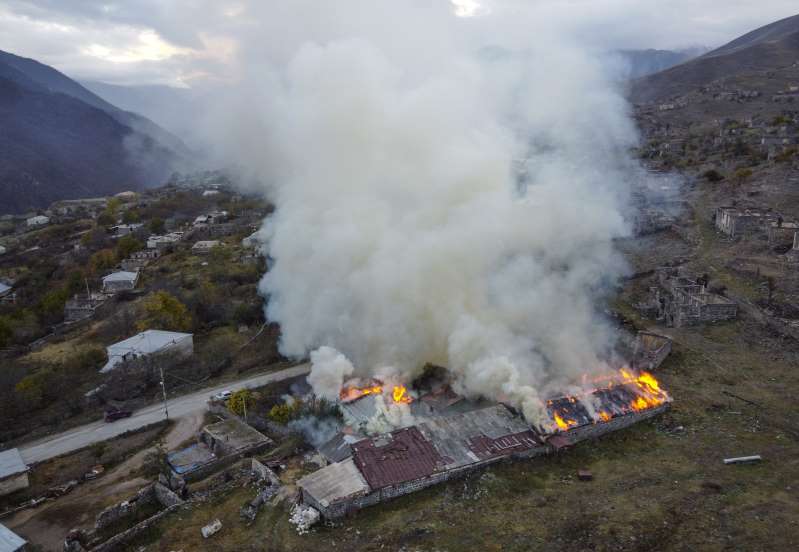 Smoke rises from a burning house in Azerbaijan's Kalbajar district, occupied by Armenia's forces but soon to be returned to Azerbaijan, November 13, 2020 / Dmitry Lovetsky / AP

Armenians settled illegally in the Azerbaijani district of Kalbajar resorted to cultural and environmental vandalism before leaving the area that will be returned to Azerbaijan.

In video footage that went viral on media and social media accounts, Armenians are seen burning houses and nearby forests in Kalbajar, located northwest of Azerbaijan's Nagorno-Karabakh region. “I can’t leave it [house] to the Turks [Azerbaijanis],” one of the Armenians said while throwing burning wooden planks and rags soaked in gasoline into an empty house.

Kalbajar should have been returned to Azerbaijan on November 15 as part of a tripartite ceasefire statement signed between Azerbaijan, Armenia and Russia on November 9. However, the deadline was prolonged until November 25 upon the request of the Armenia's government.

Armenia's forces occupied Kalbajar during the first Karabakh war on April 2 in 1993. The district was exclusively populated by 60,000 ethnic Azerbaijanis before the occupation. Following the invasion, Armenia launched a brutal ethnic cleansing to expel all Azerbaijanis from the region. Currently, there is no single ethnic Azerbaijani living in Kalbajar, while about 3,000 Armenians have been settled illegally in the district by Armenia's government after the occupation. A majority of the homes being burned by Armenians in the district belonged to Azerbaijanis before their forcible displacement.

In addition to burning houses and nearby forests, Armenians fleeing Kalbajar knocked down electric poles to remove the wires and even demounted toilet bowls from the houses as part of a massive vandalistic campaign. They have ransacked the ancient Albanian monastery complex of Khudavang (referred to as Dadivank by Armenians) in Kalbajar, as well. The temple suffered serious damages after sacred items such as church bells and stones, artifacts, and portraits have been looted. Armenians said they destroyed everything they can "in order not to leave anything to Muslims." 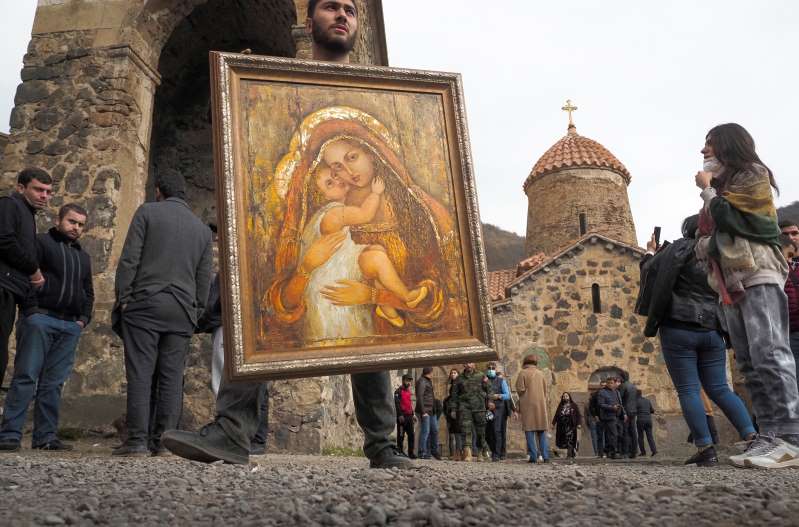 Armenians loot sacred items such as church bells and stones, artifacts, and portraits in the ancient Albanian monastery complex of Khudavang (referred to as Dadivank by Armenians) in the occupied Kalbajar district of Azerbaijan, November 14, 2020 / Dmitry Lovetsky / AP

Khudavang or Dedeveng monastery, located in the Vang village of Kalbajar, was built in the VIII-XIII centuries during the reign of Caucasian Albania - an ancient Azerbaijani state where Christianity was the major religious belief. The complex is one of the largest and most complete examples of Azerbaijan’s Christian heritage. Numerous construction inscriptions have survived in the Khudavang monastery, including the names such as Arzu, Tursun, Seyti, Hasan, Avag, Shams, Altun, Aghbuh and Garagoz, which prove the Turkic identity of builders.

After Kalbajar's occupation in 1993, the government of Armenia violated the 1954 Hague Conventions by falsifying the historical facts in order to present the monastery as an Armenian Apostolic church.

In a statement issued on November 14, Azerbaijani President Ilham Aliyev said the Azerbaijani state will properly protect the Christian temples located in the territories returned to Azerbaijan under the trilateral statement, and Christians living in Azerbaijan will be able to visit these temples.

Tensions between Armenia and Azerbaijan have not been easing down since the late 1980s and early 1990s. Anti-Azerbaijan sentiments in Armenia started growing in the late 1980s due to Armenia's illegal claims for the Nagorno-Karabakh region of Azerbaijan. Following the Soviet Union’s dissolution in 1991, Armenia launched a military campaign against Azerbaijan that lasted until a ceasefire deal was reached in 1994. Armenia occupied 20 percent of Azerbaijan’s internationally recognized territories including the Nagorno-Karabakh region and seven surrounding districts. Over 30,000 ethnic Azerbaijanis were killed and one million were expelled from those lands in a brutal ethnic cleansing policy conducted by Armenia.

The renewed clashes between the Armenian and Azerbaijani forces broke out on September 27 with Armenia's troops deployed in the occupied Azerbaijani lands began shelling heavily the military positions and civilian settlements of Azerbaijan. The attack prompted immediate counter-attack measures by the Azerbaijani army to push back Armenia's offensive.

Throughout the 44-day-long military operations, the Azerbaijani army managed to liberate around 300 civilian settlements, including five occupied cities of Jabrayil, Fuzuli, Zangilan, Gubadli and Shusha. Dozens of villages and settlements in the districts of Fuzuli, Jabrayil, Zangilan, Gubadli, Tartar, Kalbajar, Khojavend, Khojaly, Shusha and Lachin have also been liberated.

Hostilities in the Karabakh region ceased after Azerbaijan, Armenia, and Russia signed a tripartite ceasefire statement on November 9. Under the deal, Armenia agreed to return the occupied Kalbajar, and Lachin districts as well as the occupied parts of Aghdam district to Azerbaijan by December 1.