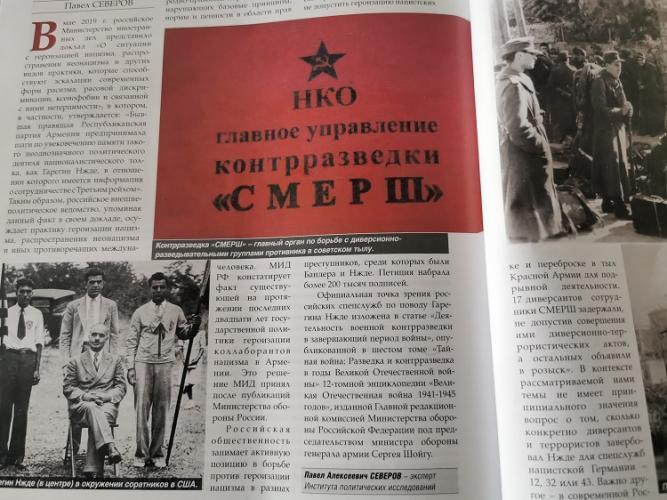 Armenians living in the Nagorno-Karabakh region of Azerbaijan, a larger part of which is currently monitored by the Russian peacekeeping forces, unveiled this week a monument of the Nazi collaborator Garegin Nzhdeh.

The Azerbaijani media and experts called it a provocative act aimed at straining tensions in the region.

The Armenian Telegram channels claim that the launch of the monument was ordered and sponsored by Armenian entrepreneur Artur Khachatryan. Sculptor Armen Petrosyan authored the structure. The inauguration of the Nazi accomplice Nzhdeh's monument was reportedly slated by Armenians for September last year, however, the war in the Karabakh region, which is an internationally recognized territory of Azerbaijan, delayed it until recently.

Igor Korotchenko, the Editor-in-Chief of the Russian "National Defense" magazine, said the organizers of such a provocation obviously remain committed to destructive policies instead of setting the ground for integration into a peaceful post-war coexistence within Azerbaijan.

"Garegin Nzhdeh is a Nazi collaborator, a war criminal convicted by a Soviet military tribunal for helping the Germans prepare and send sabotage and terrorist groups to commit terrorist acts and sabotage on the territory of the Soviet Union, including against peaceful Soviet people," Vestnik Kavkaza quoted Igor Korotchenko as saying.

"A new monument to Nzhdeh is the same as if a monument to Hitler or Himmler was erected on the territory that today is in the zone of responsibility of the Russian peacekeepers ... This monument must be immediately dismantled, bulldozed along with the pedestal. This absolutely disgusting action should not be left without attention and a corresponding reaction," he said, adding the monument's launch is an insult to Russia, Azerbaijan and the countries that were once a part of the anti-Hitler coalition.

Armenians acclaim Garegin Ter-Harutunyan, known as Garegin Nzhdeh in the fascist ranks, as a national hero, commander and philosopher despite his close collaboration with Hitler's Nazi regime. After committing atrocities against Azerbaijanis in the Azerbaijani regions of Zengezur, Nakhchivan and Karabakh in 1918-1920, Nzhdeh left the Caucasus for Bulgaria. He moved from there to the United States in 1933, where he created the extreme nationalist-racist and de-facto fascist Tseghagron movement. Nzhdeh's relationship with Nazi Germany started in 1937 after his meeting with Alfred Rosenberg, a Baltic German Nazi theorist and ideologue. He then offered Germany to launch an attack on Turkey and pledged allegiance. Tseghagron has subsequently started channeling the Armenian youth into Nazi's notorious paramilitary organization SS and other elite German military forces.

In 1942, in collaboration with another Armenian accomplice of Hitler, General Drastamat Kanayan, nicknamed Dro, Nzhdeh actively engaged in the formation of Armenian military units under the Wehrmacht – the unified armed forces of Nazi Germany. In December of the same year, he was appointed as one of the seven members of the "Armenian National Council" created by fascists. Armenian military units led by Dro and Nzhdeh took part actively in the operations of the German army.

"The 812th Armenian Legion and Armenian battalion were organized. It would grow to become twenty thousand soldiers strong. This battalion fought with the Germans in the Crimea, the North Caucasus, and Holland," American lawyer Sam Weems wrote in his book “Armenia: Secrets of a ‘Christian’ Terrorist State".

Weems adds that Armenians served as "secret agents" for the German Military Intelligence offices in Turkey and the Middle East from 1941 through 1944. A large number of Armenian soldiers have been deployed as police units in newly captured and occupied lands. Nzhdeh united Armenian soldiers under a dedicated slogan: "Who dies for Germany dies for Armenia."

SMERSH, the leading counter-intelligence service of the Soviet Red Army, captured Nzhdeh in 1944 and transferred to Moscow for prosecution. The court documents about Nzhdeh's case read that he contacted the German intelligence agencies with the intention of engaging in provocations against units of the Soviet Army during World War II; persuaded the people to work for the German intelligence and counter-intelligence agencies. Nzhdeh was sentenced to 25 years to life in prison and died in Vladimir Central Prison in Russia.

Azerbaijan's President Ilham Aliyev has repeatedly condemned the glorification of Nazism in Armenia. In a meeting of CIS heads of states in Turkmenistan in October 2019, President Aliyev criticized the erection of a monument to Garegin Nzhdeh, the "fascist executioner and traitor" in the center of Yerevan.

According to the Jewish Forward magazine, one of the world's largest concentrations of Nazi monuments is located in Armenia. A total of 22 statues, memorials, streets, squares, villages, and etc. honor Nzhdeh in Armenia's capital city of Yerevan and nineteen other locations, including the country's second-largest Gyumri city.

Nzhdeh was in the center stage of a scandal in the Armavir city of the Krasnodar Krai of Russia in 2017. A memorial plaque dedicated to him was installed next to the graves of World War II victims in the territory of the Armenian Apostolic Church in Armavir. The monument sparked a wave of protests from both the people and authorities of the city. Member of the Armavir City Duma (parliament), Aleksei Vinogradov painted over Nzhdeh's photo on the memorial with black paint in November 2019 as a sign of protest. Member of the Russian State Duma, Leonid Kalashnikov raised an issue about dismantling the structure. Following a decision of the city prosecutor's office, the infamous memorial to the Third Reich's collaborator Garegin Nzhdeh was dismantled in December 2019.