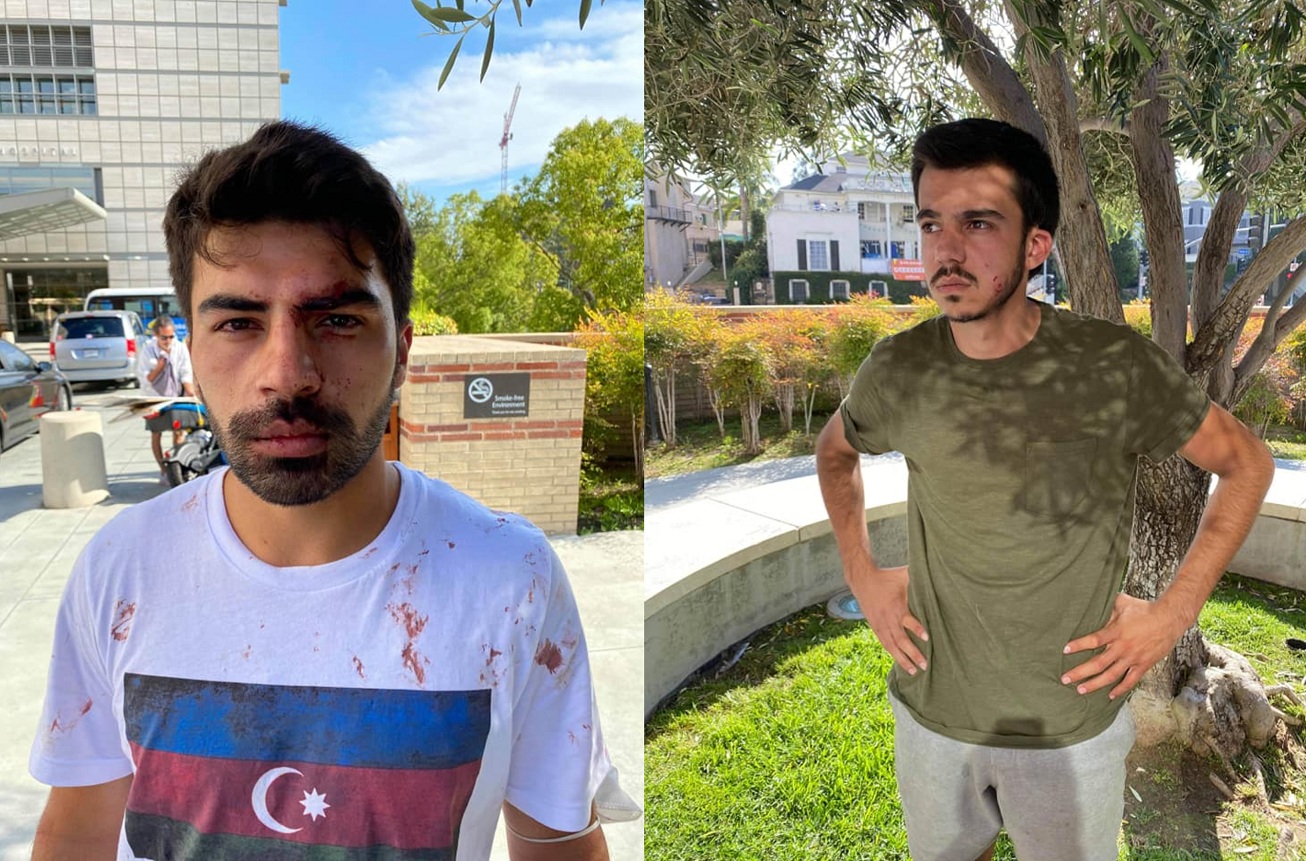 Thousands of Armenian nationalists were marching to storm the Consulate General of Azerbaijan in Los Angeles on Tuesday and attacked Azerbaijanis who were peacefully protesting Armenia's recent provocation, which led to border clashes with Azerbaijan.

On their way to the consulate, a furious crowd of Armenians attacked severely a handful of peaceful Azerbaijanis who gathered in front of the consulate on Tuesday. Seven Azerbaijanis were injured in the attack and four of them have been hospitalized, while a Los Angeles police officer suffered a head injury.

"Radical Armenian Dashnaks have demonstrated violence and aggression against peaceful Azerbaijani protesters, and even Los Angeles police, who were responsible to provide security, has failed to prevent their vandalism. Armenian radicals attacked Azerbaijani protesters, injuring seven people, including a woman," Spokesperson to the Foreign Ministry of Azerbaijan, Leyla Abdullayeva said.

The U.S. Ambassador to Baku, Earl Litzenberger was summoned to the ministry after the provocative and aggressive actions of the Armenians in front of the Consulate General of Azerbaijan in Los Angeles.

The incident comes more than a week after border clashes erupted between Armenian and Azerbaijani military and a new amendment that was adopted by the US House of Representatives' Committee earlier this week. The fighting began after Armenian troops targeted Azerbaijani positions in the border Tovuz district with heavy artillery fire. Skirmishes continued for four days and claimed lives on both sides. Twelve Azerbaijani servicemen and one civilian were killed in the attacks. Official data compiled by the Defense Ministry of Armenia confirms four deaths in the national army, however, local social media users have claimed that the figure is more than 30, blaming the government for misinforming the public.

The Committee on Rules of the US House of Representatives adopted on Tuesday an amendment to confirm the illegal occupation of Azerbaijani territories and the forcible displacement and killing of ethnic Azerbaijanis in these lands. The amendment urges the U.S. secretaries of state and defense to assess the number of internally displaced and killed persons in the illegally occupied lands of Azerbaijan, to develop a report based on this assessment and to submit it to the appropriate congressional committees.

Armenian political analyst Suren Sargsyan said the amendment is the "most anti-Armenian resolution in the history of the U.S. Congress."

"There has never been such an anti-Armenian formula. If the amendment is adopted in the Senate, it may become a precedent for inclusion in other international documents. This threatens to become a headache for the Armenians," he was quoted by Day.az as saying.

Azerbaijanis attacked by Armenians in Los Angeles say the furious Armenian protesters were unstoppable and seeking a fight.

“When I arrived, there were 50 of us, and on the other hand, there were two thousand people, and their number grew more and more," one of the Azerbaijanis living in Los Angeles wrote on his Facebook page. "The police came up and said that they would not be enough to stop the aggressive crowd. Different objects flew at us. The crowd wanted a fight."

"At some point, while I was talking to the crowd, our group moved a little further, and the Armenians drove around the block from the other side and attacked ours. The crowd saw this rushed forward and no police stopped them, and could not stop them. By the time I got there, some of ours were already trampled."

Leyla Abdullayeva of the Azerbaijani Foreign Ministry said radical Armenian groups attempted to use violence and vandalism against peaceful Azerbaijani demonstrators in various parts of the world in addition to the U.S., including in a number of European countries such as the Netherlands and Belgium.

According to the Baku-based REAL Analytics and Information Center, Azerbaijanis gathered in front of the Azerbaijani embassy in Belgium were also harmed by Armenian radicals, who set a car in front of the embassy on fire, while an Azerbaijani news correspondent was seriously injured after a stone was thrown at her.