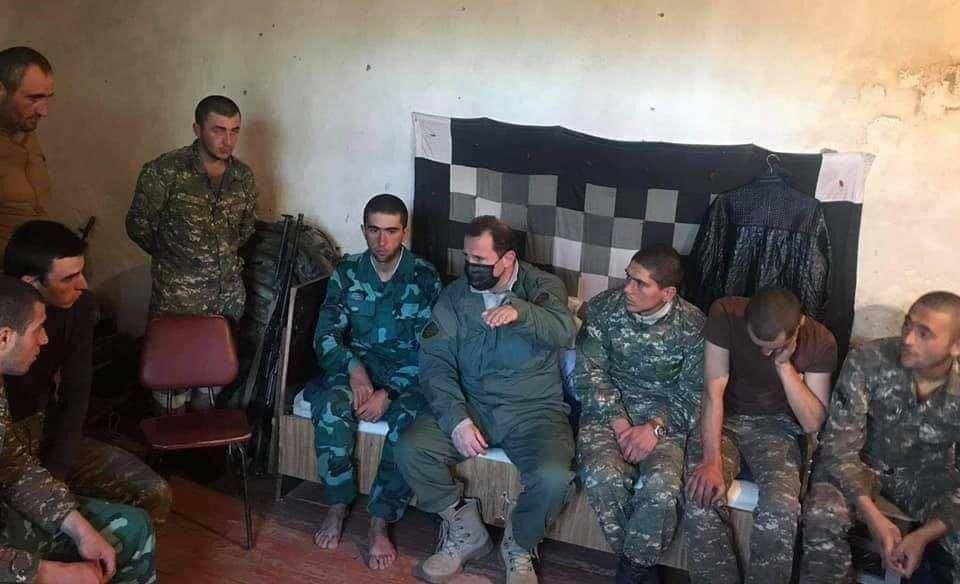 Commenting on the photo on his official Twitter account, Hikmet Hajiyev, Assistant of the Azerbaijani president and Head of Foreign Policy Affairs Department of the Presidential Administration, voiced his concerns over Armenia's making deliberate provocations.

Commenting on the photo on his official Twitter account, Hikmet Hajiyev, Assistant of the Azerbaijani president and Head of Foreign Policy Affairs Department of the Presidential Administration, voiced his concerns over Armenia's making deliberate provocations.

"The Armenian side may also dress PKK terrorists and Armenian soldiers in military uniforms of the Azerbaijani Army, organize perpetration of military crimes against the civilian Armenian population, and attempting to put the responsibility on Azerbaijan," Hajiyev tweeted on Monday.

Previously, Armenia made false claims of Syrian mercenaries being deployed to support Azerbaijani forces in the fight against the Armenian troops amidst the fierce fighting between the two South Caucasus countries over the Nagorno-Karabakh region, an internationally recognized territory of Azerbaijan that remains occupied by Armenia. The Armenian side has repeatedly stated that Syrian mercenaries allegedly fought together with the soldiers from the Azerbaijani armed forces wearing the uniforms of Azerbaijani border guards.

"We wish to remind that most recently, Armenia had released an utterly unprofessional fake video regarding foreign mercenaries in uniforms of the State Border Service of the Republic of Azerbaijan, alleging that mercenaries were fighting on Azerbaijan's side," Hajiyev added.

Meanwhile, Armenia is intensively transferring PKK terrorists to Shusha, an ancient city of Azerbaijan that was occupied by Armenia in 1992. According to international media citing intelligence sources, PKK terrorists wore military uniforms of Azerbaijani armed forces. Speaking on condition of anonymity, the sources said that when the terrorists were killed, the Armenians would claim that they were mercenaries brought from Syria by the Azerbaijani army.

"We recall very well the fact that in 1988. Armenia's intelligence agencies, aided by the USSR's Committee of State Security, through an Armenian criminal Eduard Grigoryan, had organized pogroms of the civilian Armenian population in Sumgait and later blamed Azerbaijan for that," said Hajiyev in his statement.

The PKK is listed as an armed terrorist organization by Turkey, the United States, the European Union, Australia, Japan, and Azerbaijan. Since 1984, the PKK terrorist organization has been involved in an armed conflict with Turkey in an attempt to carve out an independent Kurdish state, later changing its demand to Kurdish autonomy in Turkey. As a result of its bloody actions and terror tactics, tens of thousands of military and civilian, including women, children and infants, were killed over the past decades.

Earlier, Armenian soldier Albert Mikaelyan, who was taken as prisoner by the Azerbaijani army, also admitted that the terrorists were fighting in the Armenian army ranks in the Nagorno-Karabakh region and said they are paid a monthly salary of $600.

"A barefoot Armenian soldier sitting next to the minister, wearing a military uniform identical to the one used by the State Border Service of the Republic of Azerbaijan, has raised serious suspicions," Hajiyev wrote, adding that several minutes after publishing Armenia's Defense Ministry's press service deleted those photos from the official accounts.

In retaliation, Azerbaijani troops have so far liberated the occupied cities of Jabrayil, Fuzuli, Zangilan and Gubadli, as well as dozens of villages, settlements and strategic heights in the districts of Tartar, Fuzuli, Jabrayil, Khojavend, Zangilan, Gubadli and Kalbajar.

The two South Caucasus countries have been locked in a decades-old conflict over the Nagorno-Karabakh region since both nations gained independence following the Soviet Union’s dissolution in 1991. Armenia launched a military campaign against Azerbaijan with the aim of occupying the Nagorno-Karabakh region of Azerbaijan. A large-scale war between the two former Soviet countries lasted until a ceasefire deal was reached in 1994. As a result of the bloody war, Armenia occupied 20 percent of Azerbaijan’s internationally recognized territories – the Nagorno-Karabakh region and seven surrounding districts. Azerbaijan faced a humanitarian crisis during the war, in which 30,000 of its citizens were killed, while one million others were forcibly displaced from their homeland.