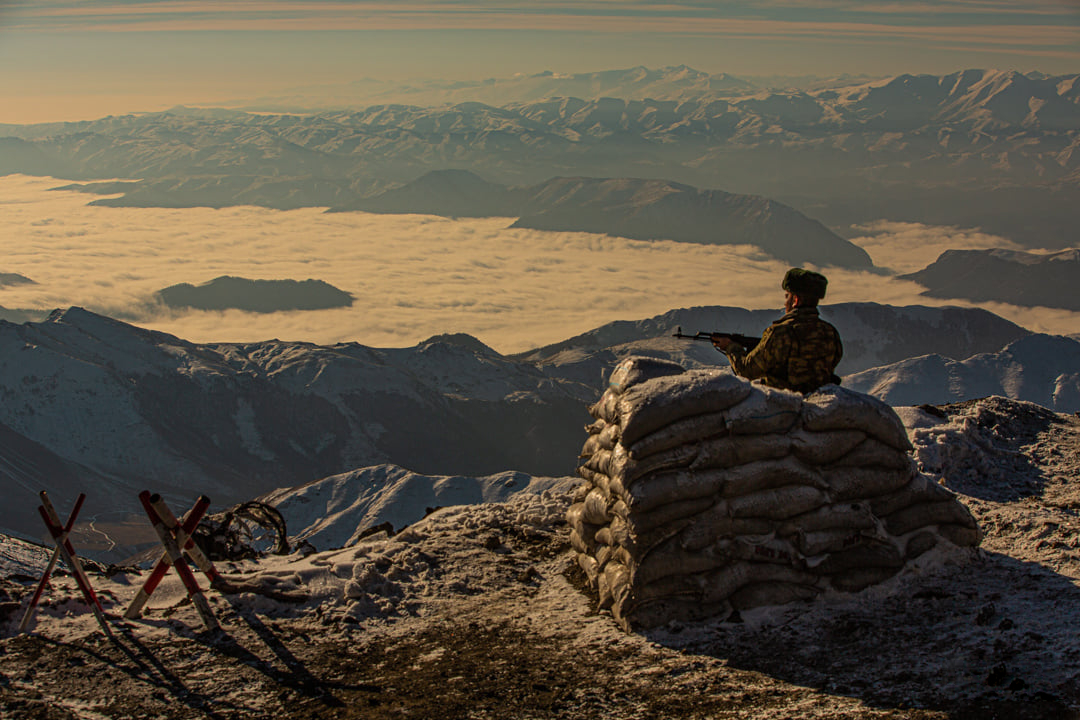 An Azerbaijani soldier stationed in an observation post in the Kalbajar district, Azerbaijan. / Reza Deghati

The Azerbaijani military detained on Thursday members of the Armenian intelligence diversion groups who crossed the Armenia-Azerbaijan border in an attempt to infiltrate Azerbaijan.

The saboteurs had been caught in Azerbaijan’s district of Kalbajar near the state border with Armenia, Azerbaijan’s defense ministry reported. Two groups consisting of 9 and 15 servicemen were trying to bury mines on the highway, which is used to supply the Azerbaijani army’s border posts.

Azerbaijani military forces besieged and detained six Armenian servicemen in an immediate counteroperation while the other group members retreated. According to the defense ministry, four of the captured Armenian saboteurs, including one officer, are members of the first reconnaissance-sabotage group, while the other two are from the second group.

Armenian forces have also tried to mobilize tanks near the border in the morning of the same day; however, the Azerbaijani troops prevented their movement with adequate measures.

The authorities of Azerbaijan have already blamed Armenia for "pursuing a policy of deliberately increasing tensions in the border areas of the two countries." Azerbaijan’s foreign ministry described the recent Armenian provocations as acts of terrorism and sabotage.

At the same time, the Armenian side shot in the air in the direction of Azerbaijani posts located around the city of Shusha. Azerbaijani forces showed restraint and refrained from taking retaliatory measures. No casualties were reported.

A ceasefire agreement between the two counties came into effect on November 10, 2020, bringing an end to a 44-day bloody war in the Karabakh region of Azerbaijan.

The last year's bloody war between the two countries began after Armenia's forces deployed in the once occupied lands of Azerbaijan shelled the Azerbaijani military positions and civilian settlements. Azerbaijani military took immediate counter-attack measures and successfully pushed back the offensive. The Azerbaijani army liberated over 300 settlements, including the cities of Jabrayil, Fuzuli, Zangilan, Gubadli, and Shusha, from nearly 30-year-long illegal Armenian occupation. Armenia also returned the occupied Aghdam, Kalbajar, and Lachin districts to Azerbaijan by December 1 as part of its obligations under the agreement.

Immediately after the war, measures to create and strengthen the border protection system were launched in the liberated districts of Azerbaijan.

Armenian forces, however, have been resorting to provocative actions that threaten to revive hostilities in the region.

The recent violation of the ceasefire is not the first incident that occurred after the truce was declared. Late last year, armed Armenian gangs hiding in the forests in the liberated Khojavand district of Azerbaijan attacked the Azerbaijani positions, killing four servicemen and a civilian. Azerbaijani troops neutralized and detained them as terrorists who tried to infiltrate the territory of Azerbaijan.

Baku-based political analyst Elkhan Shahinoglu says there is reason to believe that Armenian authorities want Russia and the Collective Security Treaty Organization to interfere in the matter.

“The aim of the Armenian government is to aggravate the situation on the border and get support from Russia because Armenia has not been able to recoup its losses in the war,” Shahinoghlu told Caspian News.

“However, Russia and the organization do not interfere in the process, which causes more dissatisfaction in Yerevan,” he added.

Azerbaijan’s President Ilham Aliyev described the recent events on the border as an inadequate reaction of Armenia to the ongoing process of identifying the Armenia-Azerbaijan borderline. He blamed Armenian authorities for exaggerating the situation and trying to internationalize the issue. President Aliyev believes that Azerbaijan and Armenia should sign a peace treaty to eliminate military confrontation risks.

On May 19, Russia’s President Vladimir Putin vowed to continue Russia’s mediation efforts and consultative assistance aimed at reaching an agreement on the beginning of the process of delimitation and demarcation of the state border between Azerbaijan and Armenia.