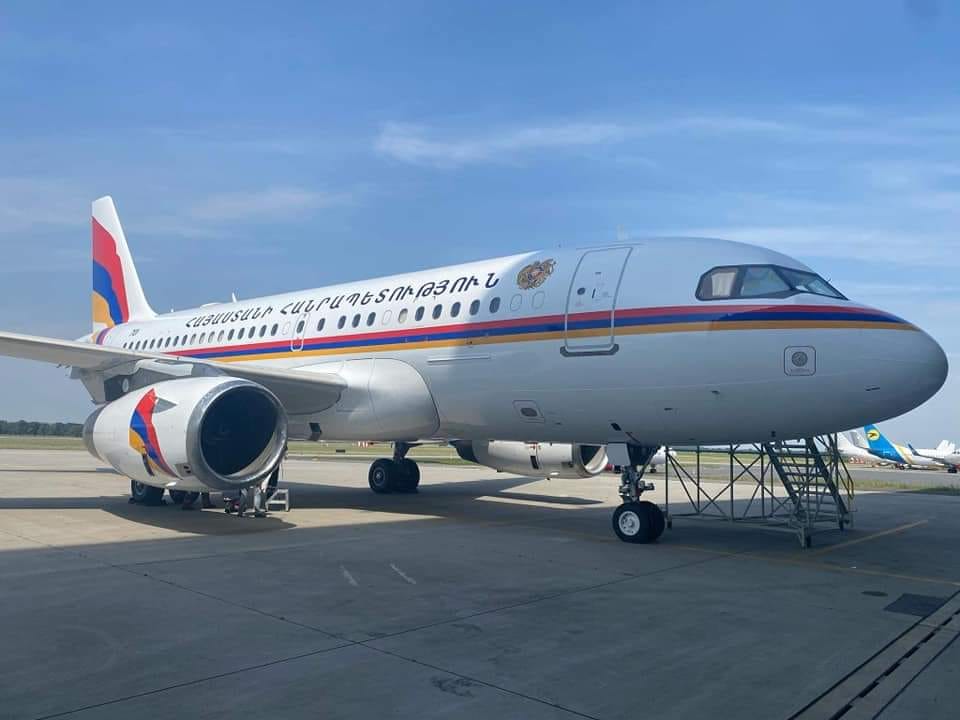 The "board number one" of Armenia reportedly carried out military bullet-resistant vests from Russia to Armenia on May 5, 2021 / Courtesy

Armenian authorities have reportedly used the airplane of the country’s prime minister to transport military bulletproof vests from Russia, a move which is strictly prohibited under international civil aviation rules.

An Armenian delegation led by acting Prime Minister Nikol Pashinyan traveled to the Russian city of Kazan on board the Airbus A319-132 on April 29 to attend the meeting of the intergovernmental council of the Eurasian Economic Union countries. The return flight scheduled for April 30 on the same plane was canceled due to what was explained as a technical malfunction of the aircraft.

The airplane was left in Kazan for what was believed to be a repair. The Armenian officials used another plane to return to Yerevan. Meanwhile, with the support of the Armenian Embassy in Russia, Pashninyan’s dysfunctional aircraft was dispatched from Kazan to the city of Vladikavkaz in the south of Russia, where it has been loaded with bullet-resistant vests intended for Armenia’s Defense Ministry.

According to the information from Flighradar24.com, the "board number one" of Armenia took off from Kazan on May 5, made a short-term stop at the Vladikavkaz airport, and then headed to Yerevan’s Erebuni airport on the same day.

Armenian authorities reportedly decided to use the prime minister’s aircraft to transport military gear after Georgia’s refusal to let it pass through its territory. On May 1, Georgian border guards did not allow trucks carrying bulletproof vests to be transported to Armenia from Russia. Two trucks with the items of body armor, which were dispatched from Moscow on March 5, remained more than a month in the neutral zone of the Russian-Georgian border, where on March 28 Georgian border guards confiscated the documents of the drivers.

After more than a month of waiting at the border, the cargo was sent back to Russia, later loaded on an Armenian government aircraft and delivered to Armenia bypassing Georgia's restrictions, a move which also contradicts and violates the Chicago Convention on International Civil Aviation and ICAO standards.

This is not the first case of its kind involving high-ranking officials from the Armenian government.

During the war between Armenia and Azerbaijan in the latter's Karabakh region on October 3, 2020, the official aircraft of the Armenian government flying on the Moscow-Yerevan route illegally carried out the delivery of military products through Georgian airspace. The country’s Deputy Prime Minister, Mher Grigoryan paid a one-day working visit to Moscow on October 3 to fulfill this delivery.

The next similar case involving an Armenian state official was the deployment of PKK terrorists from Syria and Iraq to the Karabakh region shortly before the start of the war on September 27, 2020. Hrachya Poladian, the Armenian Ambassador to Baghdad, reportedly established contacts with the PKK terrorists and integrated them into the Armenian forces deployed in then occupied Karabakh region of Azerbaijan.

Meanwhile, Armenia's military used prohibited Iskander-M lethal ballistic missiles against Azerbaijan during the war in the Karabakh region last year. The debris of two rockets have been found on the outskirts of Azerbaijan’s Shusha city months after hostilities ended.

The Russia-made Iskander missile system is produced in two variants: Iskander-M and Iskander-E. The M version is intended for use by the Russian military and banned for export, while the E type is purposed for export. The strike range of the E-type Iskander is 200-280 kilometers, while the M-type projectile can fly up to 500 kilometers. Russia reportedly dispatched the Iskander missiles to Armenia in September 2016.

However, the missile wreckages found in Shusha belong to an M-type Iskander system. Armenia acquired Iskander-M missiles, which are banned for export, either by smuggling or in violation of international norms and regulations because Armenia could only acquire Iskander-E, an export version of the missile.