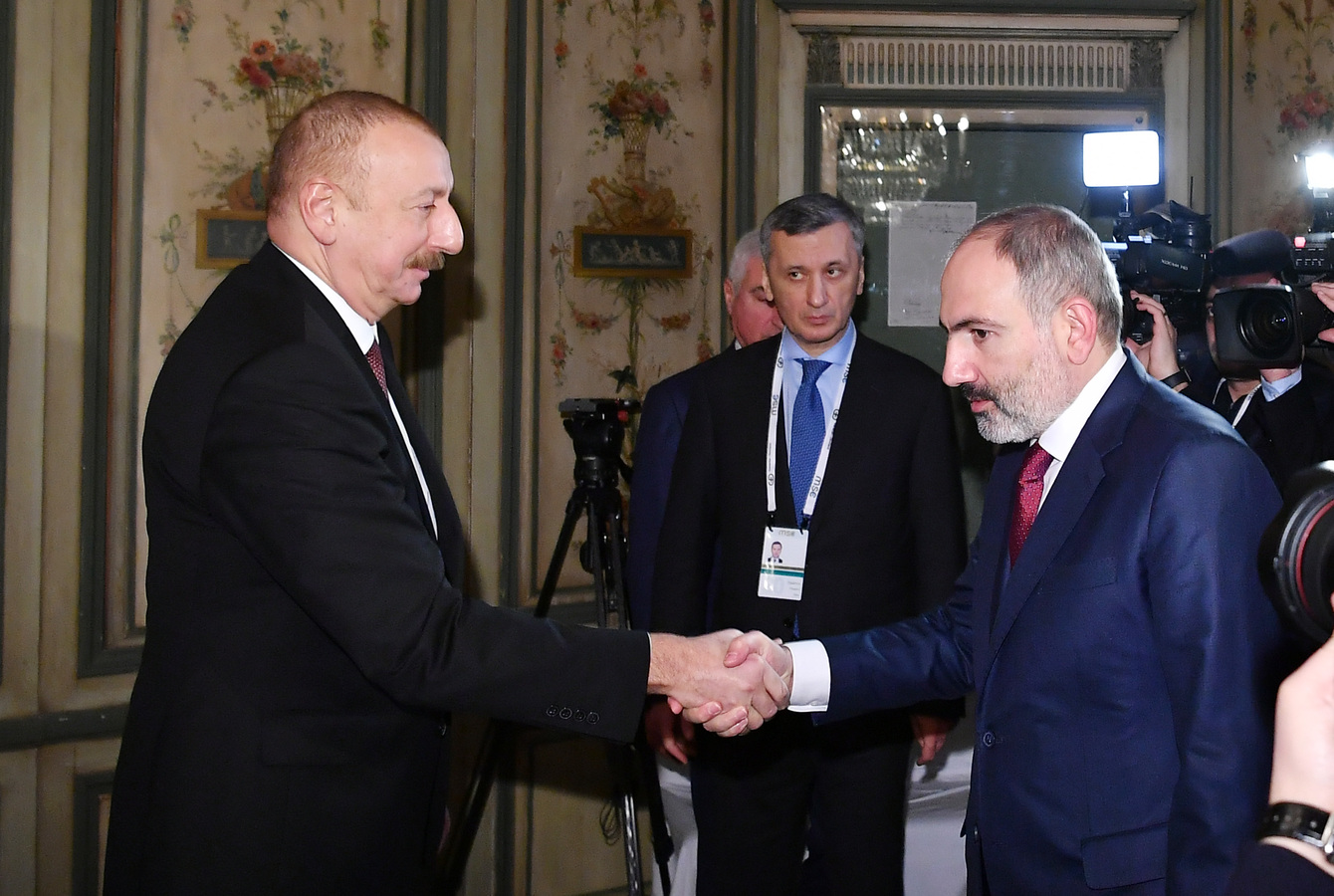 President Ilham Aliyev of Azerbaijan (L) and Prime Minister Nikol Pashinyan of Armenia greet each other before one on one meeting in Munich, Germany, February 15, 2020 / President.Az

Armenian Prime Minister Nikol Pashinyan met with Azerbaijan’s President Ilham Aliyev on the sidelines of the Munich Security Conference over the weekend, where the two sat for the first public debate to discuss the status and history of one of the world’s oldest conflicts - the Armenia-Azerbaijan Nagorno-Karabakh conflict. Armenian political circles admitted that Aliyev won the debate, which had sparked harsh criticism from a number of analysts who blamed the Armenian premier for losing the discussions.

Armenia’s former defense minister Artak Zakaryan said he was disappointed with Pashinyan’s answer to a question about what Armenia expects from the international community in regard to solving the Nagorno-Karabakh conflict.

During the debate in Munich, Aliyev said there should be more international pressure put on Armenia and the OSCE Minsk Group, which mediates political talks between Baku and Yerevan and is co-chaired by diplomats from Russia, the United States, and France, should explain to Armenia that Nagorno-Karabakh is not Armenia. Aliyev reiterated that the Nagorno-Karabakh region, which is internationally acknowledged as part of Azerbaijan, is not an independent country, and no country recognizes this illegal entity.

Artak Vardanyan, an Armenian political watcher, says Pashinyan seemed more like a tabloid journalist on stage in Munich than a political leader.

“Pashinyan’s knowledge of the essence of the conflict is at the level of a third-rate reporter for a tabloid newspaper,” Vardanyan said. “Nikol has no basic knowledge on the topic of debate, he has even not listened to Aliyev!”

Vardanyan attributed Pashinyan’s poor performance to poor preparation for the debate and having fallen flat when Aliyev addressed his arguments.

“I suspect that ... he was pumped up with some theses before the meeting, and during Aliyev’s speech, for the most part, he became self-conscious, wondering how it would be more effective to present the next thesis when the word was passed to him.”

Vardanyan noted that Pashinyan’s body language was lacking self-confidence, unlike that of Aliyev.

“Here, of course, Aliyev, with his experience and self-confidence, could give a many-kilometer head start to our hamster ... That's where he needs to learn from Aliyev: how to behave in public ... Aliyev knows how to sit with dignity, how to gesticulate. He is a master!”

Pashinyan and Aliyev sat for the first-ever face-to-face public debate on the margins of the Munich Security Conference on February 15, where the Nagorno-Karabakh conflict took center stage in the discussion. The conflict, which has been ongoing for nearly 30 years, is a result of Armenia's aggression and groundless claims on a territory that belongs to Azerbaijan according to both historical facts and international documents.

Aliyev reiterated Baku’s point that for political dialogue to proceed and the two sides reach a peaceful settlement, the four UN Security Council resolutions that call for the full withdrawal of Armenia's troops from the occupied region must be implemented unconditionally.

“The Azerbaijani side used its formulas. Pashinyan, obviously, was not ready, and it was felt that except his empty formula: “The settlement of the conflict should suit three people - Armenia, Artsakh, and Azerbaijan”- he has nothing more to say,” Armenian political analyst, Andranik Tevanyan said, referring to the name that is used in Armenia for the Nagorno-Karabakh region, and noting Pashinyan’s insistence that the region’s self-styled leaders must be part of any political settlement – a position Baku has rejected.

Tevanyan, too, took shots at the Armenian prime minister’s demeanor.

“Pashinyan against the "falcon" background of Aliyev is trying to play the role of a dove of peace in order to score points in the eyes of the West, but this is a meaningless and dangerous activity. Pashinyan, speaking to an international audience with such a reserve and with such an image, once again proved that the head of the state’s costume is too big for him!”

During the debate, Pashinyan left unanswered questions asked by Aliyev, including about the 70 percent ethnic Azerbaijani population in Yerevan in the 19th century, and supposed Armenian origins of Khankendi city, the central city of the Nagorno-Karabakh region. Aliyev noted that the Armenian name for the city, Stepanakert, is nothing more than a new name: it comes from the name of the Bolshevik politician Stepan Shaumyan and the Armenian word kert, which means “city.”

The Azerbaijani ancient name for the city, Khankendi, refers to the word "kənd" which means village and khan, and has roots in the khanate period in Azerbaijan’s history, between the mid-17th to the mid-19th centuries.

“Have you seen the Pashinyan-Aliyev debate? In just a few minutes, so many own goals against Armenia,” Sharmazanov said.