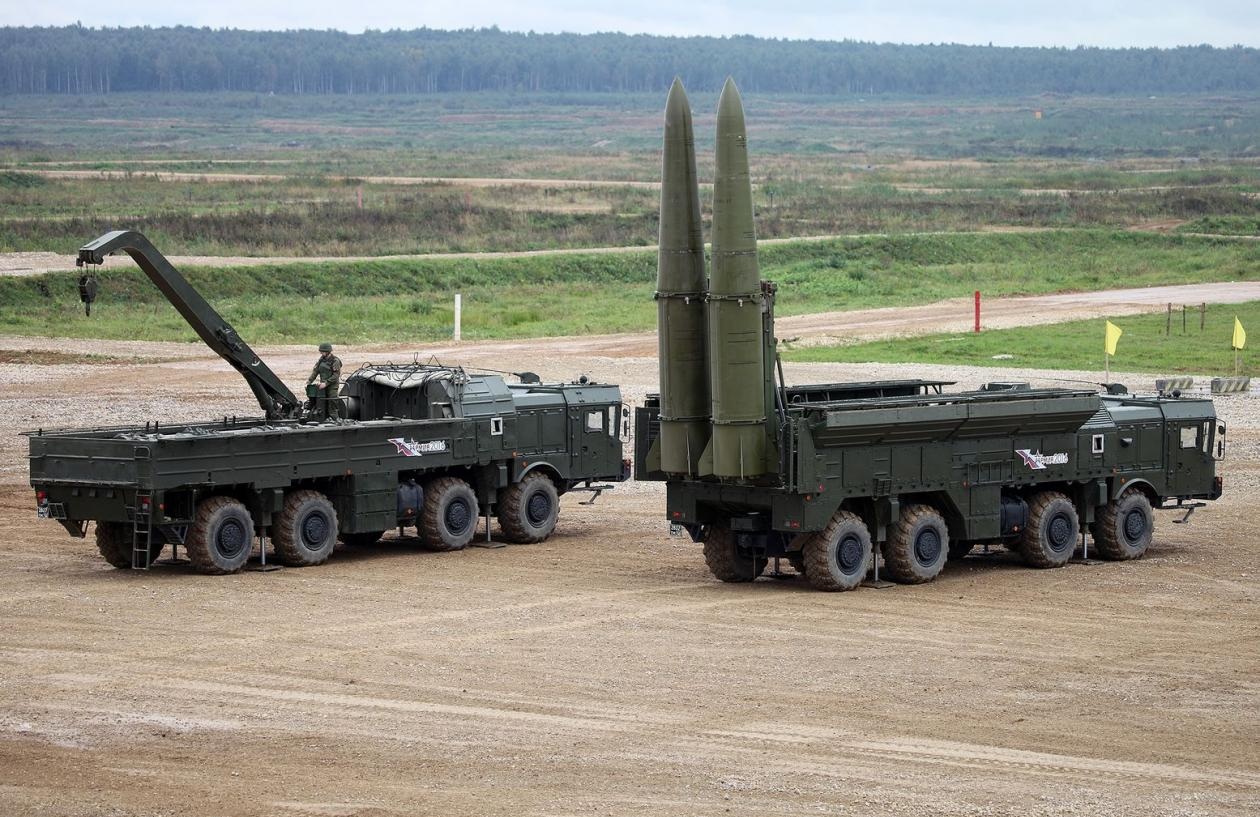 The Russian-made 9K720 Iskander, which is also known as SS-26 Stone, is a road-mobile short-range ballistic missile (SRBM) with a range of up to 500 kilometers. The system deploys both 9M723 ballistic and 9M728/29 cruise missiles. The Iskander supports different conventional warheads such as a cluster munitions warhead, a fuel-air explosive enhanced-blast warhead, a high explosive-fragmentation warhead, an earth penetrator for bunker-busting, and an electromagnetic pulse device for anti-radar missions, as well as nuclear warheads / Vitaly V. Kuzmin / The National Interest

A former Armenian military official admitted that the armed forces of Armenia used Russian-made Iskander short-range ballistic missiles to hit Azerbaijani positions in the latest clashes in the Karabakh region of Azerbaijan.

The former head of the military control service of Armenia's Defense Ministry, Movses Hakobyan told journalists on Thursday that the Iskander tactical missile system was deployed during the escalation of hostilities in the Nagorno-Karabakh region.

"It [Iskander] was used. But I cannot say in what direction," Hakobyan said, answering the question about the possible deployment of Iskander by Armenia's troops, RIA Novosti reports.

American The Drive media outlet posted on November 9 a video footage showing Armenian soldiers filming the sequential launch of two ballistic missiles from a missile Transporter-Erector Launcher (TEL). The TEL in the clip was said to be Iskander rather than the Soviet-era Tochka-U and Scud missiles as the same launchers for the latter two are able to carry only one projectile at a time. The same video was posted by the Armenian audience on Facebook on the same day.

Azerbaijani authorities have neither confirmed nor denied the use of Iskander ballistic missile against the country by Armenia throughout the fighting in the Karabakh region.

The Russian-made 9K720 Iskander, which is also known as SS-26 Stone, is a road-mobile short-range ballistic missile (SRBM) with a range of up to 500 kilometers. The system deploys both 9M723 ballistic and 9M728/29 cruise missiles. The Iskander supports different conventional warheads such as a cluster munitions warhead, a fuel-air explosive enhanced-blast warhead, a high explosive-fragmentation warhead, an earth penetrator for bunker-busting, and an electromagnetic pulse device for anti-radar missions, as well as nuclear warheads.

Russia dispatched the first batch of the Iskander missiles to Armenia in September 2016. Armenia has demonstrated the newly purchased weapons in a military parade dedicated to the 25th anniversary of the country's independence on September 21 of the same year. The country's Prime Minister Nikol Pashinyan said in a press briefing at the St.Petersburg Economic Forum in June 2019 that "Armenia has a sufficient amount of Iskander missiles."

In September, the former spokesperson to the Armenian Defense Ministry, Artsrun Hovhannisyan said the Armenian forces would use the weapons it has in its arsenal, in particular, the Iskander missile systems if this corresponds to the logic of the conduct of hostilities in the Karabakh region. Armenian Ambassador to Russia, Vardan Toghanyan has confirmed the statement of the defense ministry's official by saying if circumstances require "all measures will be taken, including the use of Iskander. That is, the Armenian armed forces will have to use all military arsenal."

The Armenia-Azerbaijan Nagorno-Karabakh conflict, which is over 30 years old, is one of the main dangers to peace and stability in the South Caucasus. The roots of the conflict are traced back to the rise of anti-Azerbaijan sentiments in Armenia in 1988 due to Yerevan's illegal claims for the internationally recognized Nagorno-Karabakh region of Azerbaijan.

Following the Soviet Union’s dissolution in 1991, Armenia launched a full-blown war against Azerbaijan with the armed attack on the Nagorno-Karabakh region. The bloody war lasted until a ceasefire in 1994. Armenia's forces killed 30,000 Azerbaijanis and displaced one million throughout the hostilities, while forcibly occupied 20 percent of Azerbaijan’s internationally recognized territories – the Nagorno-Karabakh region and seven surrounding districts. Armenia continued to defy fulfilling four UN Security Council resolutions demanding the immediate withdrawal of the occupying forces from Azerbaijani lands and the return of internally displaced Azerbaijanis to their native lands.

The conflict spiraled on September 27 following the artillery shelling of Azerbaijani military positions and civilian settlements by Armenia's forces deployed in the occupied lands of Azerbaijan. Uninterrupted attacks of the Armenian troops triggered counter-offensive measures by the Azerbaijani forces. An intense exchange of fire and deployment of military materiel to the frontline by both sides shifted the clashes into a full-blown war.

Armenia has continuously targeted densely populated civilian areas in Azerbaijan with a missile fire during the hostilities, including the country's second-largest city of Ganja with Russian-made SCUD/Elbrus operative-tactical ballistic missiles in October. However, some media reports claimed that Ganja was hit by Iskander missiles, according to Ruslan Pukhov, head of the Russia-based Center for Analysis of Strategies and Technologies. Attacks on Ganja about 60 kilometers from the battlefield killed at least 23 civilians and injured over 60 others.

Armenia's deadliest attack on civilians was reported in the Barda city of Azerbaijan on October 27 and 28. Human Rights Watch revealed that Armenia's forces used the prohibited Russian-made Smerch cluster missiles to kill 27 civilians and injure 107 others in two consecutive attacks on the city that is home to 40,000 people and locates 30 kilometers far from the battle zone in the Karabakh region.

As of November 9, when fighting in the Karabakh region was halted with the signing of a ceasefire statement between Azerbaijan, Armenia, and Russia, the armed forces of Armenia killed a total of 93 Azerbaijani civilians and wounded 407 others. About 504 civilian facilities and 120 multi-story residential buildings have been destroyed by the Armenian troops in Azerbaijan throughout the 44-day-long fighting.