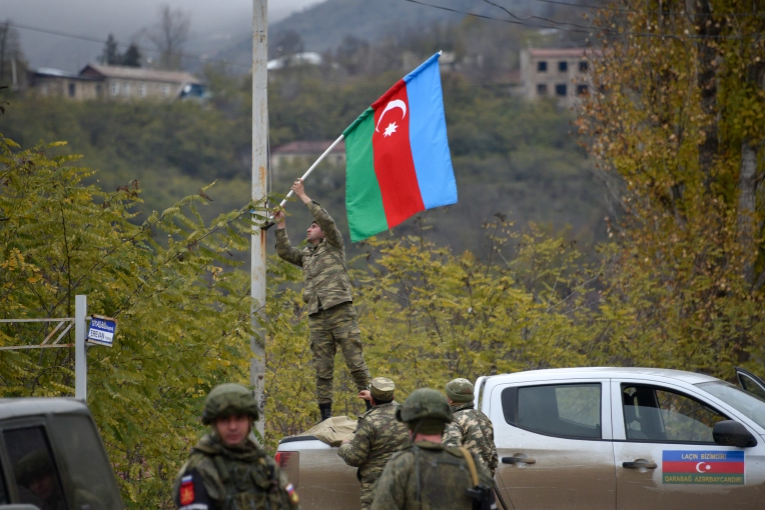 An Azerbaijani soldier fixes a national flag on a lamp post in the district of Lachin, Azerbaijan, December 2020 / AFP

Provisions of the trilateral statement signed by Armenia, Azerbaijan, and Russia have been violated by the remnants of the Armenian separatist gangs in the certain parts of Azerbaijan's Karabakh region, which are temporarily controlled by the Russian peacekeepers.

“Such illegal and obviously provocative actions are immediately reported to the command of the peacekeeping forces and the joint Russian-Turkish Monitoring Center. Azerbaijan requires them to stop such illegal actions of separatists,” Caliber reported, citing unnamed sources with knowledge of the situation on the ground.

According to the trilateral statement signed on November 10, 2020, deployment of the Russian peacekeeping forces to the certain parts of Karabakh region should be carried out simultaneously with the withdrawal of the Armenian armed forces.

Armenia and Azerbaijan had been in an armed conflict for nearly 30 years over the Karabakh (Garabagh) region, an internationally recognized territory of Azerbaijan. Armenia launched a full-blown military aggression against Azerbaijan following the Soviet Union’s dissolution in 1991. The bloody war lasted until a ceasefire in 1994 and saw Armenia occupying 20 percent of Azerbaijan’s internationally recognized territories. Over 30,000 Azerbaijanis were killed, and one million were expelled from those lands in a brutal ethnic cleansing policy conducted by Armenia.

On September 27, 2020, the decades-old conflict took a violent turn after Armenia’s forces deployed in the occupied Azerbaijani lands shelled military positions and civilian settlements of Azerbaijan. During the counter-attack operations that lasted 44 days, Azerbaijani forces liberated over 300 settlements, including the cities of Jabrayil, Fuzuli, Zangilan, Gubadli and Shusha, from nearly 30-year-long illegal Armenian occupation. The war ended in a tripartite statement signed on November 10, 2020, by Armenia, Azerbaijan and Russia. Under the statement, Armenia also returned the occupied Aghdam, Kalbajar, and Lachin districts to Azerbaijan.

In line with the terms of the tripartite agreement, a total of 1,960 Russian peacekeepers monitor the peace in the Armenian-inhabited part of Azerbaijan’s Karabakh region. The contingent will stay in the area for five years with the possibility of extension unless any of the signatory parties object to this extension six months before the expiration of the current period.

Recently, Azerbaijan's President Ilham Aliyev has made positive remarks about the job that the Russian peacekeepers were doing. However, concerns remain about illegal visits of foreigners to the zone where the peacekeepers are stationed, as well as peace violations by the Armenian armed gangs, and different approach toward inbound and outbound vehicles in the same area.

“We can also see that 91 percent of inbound cars – notice how accurate our information is, 91 percent – are not checked [by the Russian peacekeepers]. However, only 46 percent of outbound cars are not checked. What does this show? It shows that Russian peacekeeping forces are trying to make the entrance easy and create certain problems for those leaving,” President Aliyev said.

Baku immediately voiced its concern over French presidential hopeful Valérie Pécresse’s illegal visit to the Azerbaijani territories in December 2021, while the peacekeepers said the visit was conducted without their knowledge.

In November 2021, at least three Azerbaijani servicemen were injured in a terrorist attack committed by an Armenian citizen, who was later identified to be Norayr Mirzoyan, a participant in the war between Armenia and Azerbaijan in the latter’s Karabakh region in 2020. Mirzoyan threw an RGD-5 anti-personnel fragmentation grenade at the Azerbaijani soldiers stationed next to the Russian peacekeepers along the Lachin corridor near the Shusha city.

Shortly after the end of the war in the Karabakh region in November 2020, Azerbaijani troops deployed in the country’s liberated territories discovered a group of more than 60 armed Armenians who had been dispatched from Armenia, mainly its Shirak region, after the end of hostilities. They carried out three separate attacks on Azerbaijan’s positions killing four servicemen and a civilian at different times before being detained by the Azerbaijani forces. In addition, dozens of armed Armenians were captured during an attempt of infiltration into the Azerbaijani borders on November 16, 2021.

Armenia tried to label the captured armed saboteurs as prisoners of war, but Azerbaijan charged them as terrorists given their detention in the post-war period.

As a sign of humanity, Azerbaijan has released some of the captured criminals in May, June, July and December of 2021. The latest repatriation of the detained Armenian saboteurs took place on February 7, 2022.

However, Armenia has still refrained from providing information about 3,890 Azerbaijani citizens, including 71 children, 267 women, and 326 elderly people who went missing during the First Karabakh War in 1991-1994. Baku has demanded that Armenia assist in investigating the fate of those people, a request that remains unfulfilled.