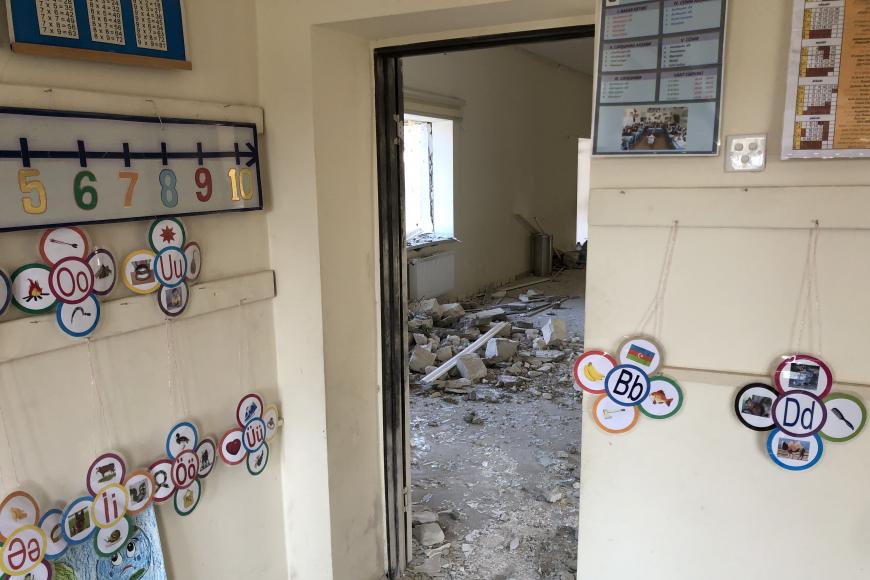 A school that was damaged by Armenian missile strikes in the Mahrizli village of the Aghdam district, Azerbaijan / Tanya Lokshina / Human Rights Watch

As the first anniversary of the second Armenia-Azerbaijan war in the latter's Karabakh region approaches, the impact of the hostilities is still being felt in some areas in Azerbaijan, including in education infrastructure, which suffered serious damages and losses.

During the war, which took place between September and November 2020, the Armenian military destroyed a total of 60 schools, as well as kindergartens in various districts of Azerbaijan, according to data released by the country's Education Ministry on September 9, which is celebrated as the International Day to Protect Education from Attack.

Ten children, aged between 6 and 10, were killed and fourteen injured in Azerbaijan in the wake of the Armenian attacks. At least 300,000 students studying at 1,150 schools located in the vicinity or within a certain radius of the frontline in Azerbaijan were not able to continue their education due to Armenian missile threats.

Rocket fires hit 17 schools in the district of Aghdam, one of the areas where the war was fought, and 14 in the district of Tartar, which was said to be the most-bombed European city after World War 2. In Ganja, the second-largest city of Azerbaijan, nine schools were destroyed or badly damaged.

“Of those killed by Armenian missile attacks, was my classmate Nigar,” a student at one of the war-torn schools in Ganja said, referring to a girl that was killed a day before her 15th birthday.

Armenian forces targeted Ganja with ballistic missiles and rockets, including Russia-made SCUD/Elbrus operative-tactical ballistic missiles and Smerch multiple launch rocket systems, five times in October 2020. At least 27 civilians were killed and 125 injured in the missiles attacks on the city with a population of 500,000 and located about 60 kilometers far from the last year’s conflict zone in Azerbaijan's once occupied territories. 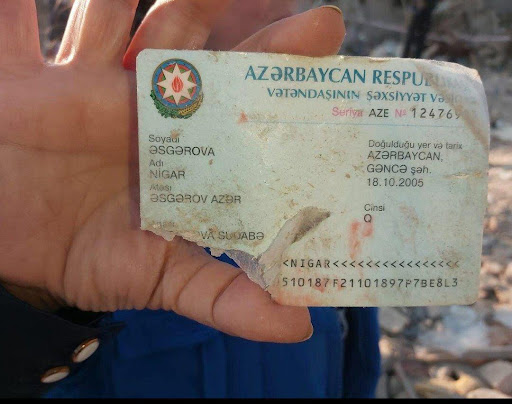 The ID card of late Nigar Asgarova was found among debris following Armenia's missile attack on the Ganja city of Azerbaijan on October 17, 2020. Nigar would turn 15 the next day if she could survive the attack / Courtesy

Armenia and Azerbaijan had long been locked in an armed conflict in the latter’s Karabakh (Garabagh) region since the early 1990s when Armenia illegally occupied 20 percent of Azerbaijan’s internationally recognized territories. On September 27, 2020, the decades-old conflict between the two countries spiraled after Armenia’s forces deployed in the occupied Azerbaijani lands shelled military positions and civilian settlements of Azerbaijan. During the counter-attack operations that lasted 44 days, Azerbaijani forces liberated over 300 settlements, including the cities of Jabrayil, Fuzuli, Zangilan, Gubadli and Shusha, from nearly 30-year-long illegal Armenian occupation.

The war ended in a tripartite statement signed on November 10 by Armenia, Azerbaijan, and Russia. Under the statement, Armenia also returned the occupied Aghdam, Kalbajar and Lachin districts to Azerbaijan.

“Armenian forces repeatedly launched missiles, unguided rockets, and heavy artillery into populated cities and villages in violation of the laws of war,” said Hugh Williamson, Europe, and Central Asia director at Human Rights Watch. “Again, and again in the course of the six-week war, these attacks unlawfully destroyed civilian lives and homes and should be impartially investigated.”

According to the data released by the Prosecutor General’s Office of Azerbaijan, at least 94 civilians were killed and 414 were injured in Azerbaijan as a result of the shelling of residential settlements with heavy artillery and missiles by the Armenian forces during the last year's war. Over 3,400 houses, 120 residential buildings and 512 civilian facilities were destroyed and damaged by the Armenian military.