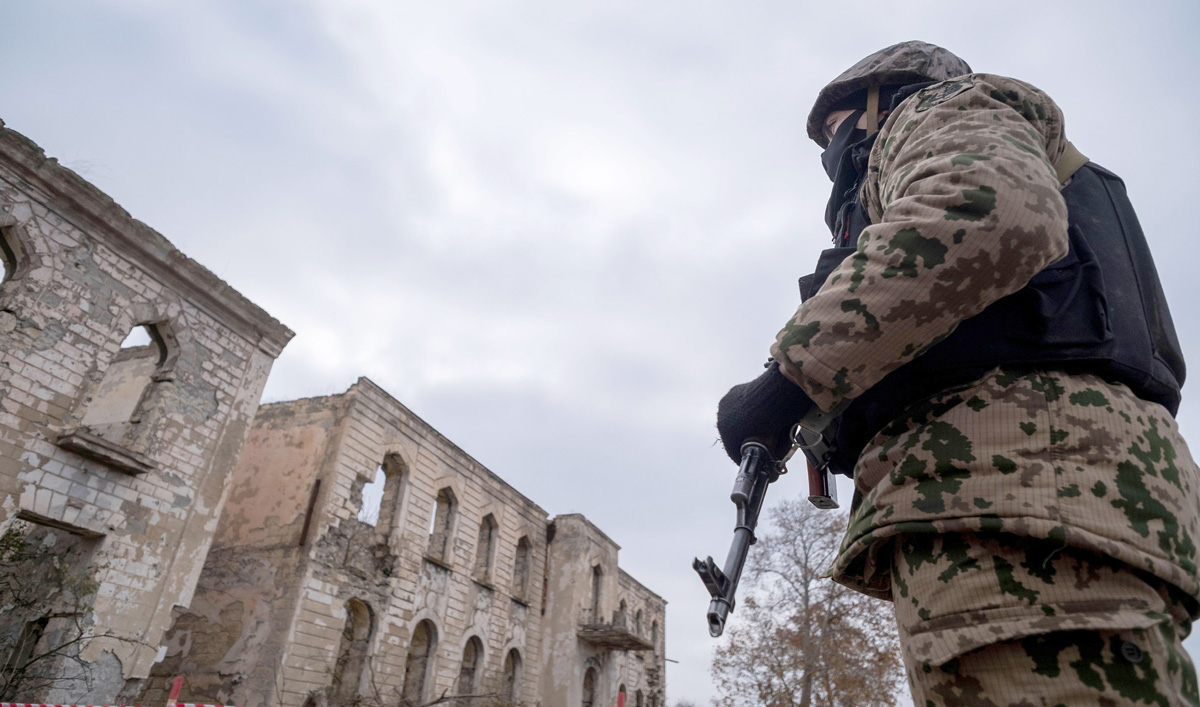 An Azerbaijani soldier looks at a building on December 14, 2020, in the town of Aghdam, Azerbaijan, which was destroyed during three decades of illegal occupation by Armenian forces (1993–2020). Azerbaijan reclaimed its sovereignty in the district as part of an agreement that ended the Second Karabakh War on November 9, 2020 / Eddie Gerald / Alamy

Armenian Armed Forces escalated tensions with Baku at least ten times in recent weeks by targeting the Azerbaijani districts of Lachin and Kalbajar.

The last shelling of the Azerbaijani military positions by the Armenian army took place on July 4. According to the Defense Ministry of Azerbaijan, accounts of gunfire were reported at night in the direction of the Damirchidam settlement in the Kalbajar region.

The Azerbaijani army took the operational situation under control following the adequate retaliatory measures, according to the ministry.

The regular ceasefire violations by the Armenian military on the border have been happening amidst the talks between Baku and Yerevan on the delimitation and demarcation of the state border. In May, the Border Delimitation Commissions from the two countries hold the first meeting on the interstate border to discuss the relevant issues.

Deputy Prime Minister of Azerbaijan Shahin Mustafayev, who chairs the commission, and his counterpart from Armenia, Deputy Prime Minister Mher Grigoryan have then agreed to press ahead with the meetings in different venues and confirmed the second gathering to take place in Moscow and the third in Brussels.

The issues related to the delimitation and demarcation of the Armenia-Azerbaijan state border have been high on the bilateral agenda following the victory of Azerbaijan in the 2020 war as a result of which the Azerbaijani army restored control over a large portion of the border with Armenia.

The significant part of the state border of Azerbaijan with Armenia, measuring 1,007 kilometers in length, remained out of the country’s control for nearly 30 years after Azerbaijan's Karabakh (Garabagh) region fell under the illegal Armenian occupation in the early 1990s. Following the Soviet Union’s dissolution in 1991, Armenia launched a full-blown military campaign against Azerbaijan, marking the longest and deadliest war in the South Caucasus region. The bloody war ended with a ceasefire in 1994, which saw Armenia forcibly occupying 20 percent of Azerbaijan’s internationally recognized territories. Over 30,000 Azerbaijanis were killed, and one million others were expelled from those lands in a brutal ethnic cleansing policy conducted by Armenia.

On September 27, 2020, the decades-old conflict between the two countries intensified after Armenia's forces deployed in occupied Azerbaijani lands shelled military positions and civilian settlements of Azerbaijan. During counter-attack operations that lasted 44 days, Azerbaijani forces liberated over 300 settlements, including the cities of Jabrayil, Fuzuli, Zangilan, Gubadli, and Shusha, from a nearly 30-year-long illegal Armenian occupation. The war ended in a tripartite statement signed by Armenia, Azerbaijan and Russia on November 10, 2020. Under the statement, Armenia also returned the occupied Aghdam, Kalbajar and Lachin districts to Azerbaijan.

The Azerbaijani government stationed multiple units of the Armed Forces and State Border Service within the border regions, including in Kalbajar and Lachin to strengthen border protection. However, this move sparked backlash from the Armenian side since May 2021. Yerevan has then blamed Azerbaijani forces for the so-called “encroaching” on Armenia’s territory.

Since then, provocations against the Azerbaijani army by the Armenian military have been common, resulting in serious complications on the frontier. Baku has been calling for the immediate start of the delimitation and demarcation process as it seeks to ease tensions with Yerevan. This process is one of the key conditions of the Azerbaijani government for establishing relations with Armenia and ensuring stability and peace in the region.