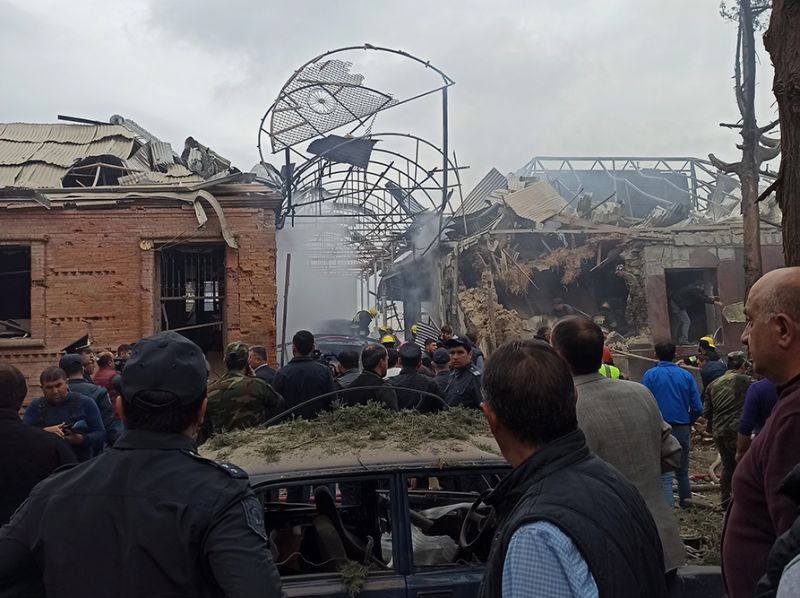 One civilian killed and 32 injured as a result of the missile strike by Armenia's army on residential areas of Ganja, the second largest city of Azerbaijan, 60 km away from the Armenian border. / APA

The armed forces of Armenia have launched missile attacks on residential areas of Azerbaijan’s second largest city of Ganja, 60 km away from the Armenian border, killing a civilian and injuring 32 others in the eighth day of the heavy clashes over the occupied Nagorno-Karabakh region of Azerbaijan.

Hikmat Hajiyev, a senior aide to the Azerbaijani president and the head of the foreign policy affairs department within the Presidential Administration tweeted that “Azerbaijan retains its right to take adequate measures against legitimate military targets to defend civilians and enforce Armenia to peace. Four new missiles just hit Ganja”.

Referring to the shelling of Ganja city that underwent fire from the territory of Armenia, Azerbaijani Defense Minister, Colonel-General Zakir Hasanov warned that “opening fire from Armenia’s territory on Azerbaijan’s territory is a provocative act and expands the zone of hostilities”.

The self-proclaimed leader of illegal regime in the occupied Nagorno-Karabakh region, Arayik Harutunyan announced that “at my orders, today the Defense Army delivered several rocket strikes with the purpose of neutralizing military facilities deployed in the city of Ganja”. He also warned the Azerbaijani side with continuing “powerful strikes”.

However, the Azerbaijani defense ministry denied the information spread by the Armenian side about the alleged shooting of military facilities and airport in Ganja, describing it “provocative and false."

“As a result of enemy fire, civilians, civilian infrastructure and ancient historical buildings were damaged,” the statement added.

Rockets from the Russia-made "Smerch" system fell on the city, and some of them did not explode, and some were intercepted and destroyed in the air. From the morning of October 4, the Armenian forces also continued shelling civilians and civilian infrastructures in Azerbaijan’s districts of Tartar, Beylegan, Aghdam, and Fuzuli.

A total of 24 Azerbaijani civilians were killed, 111 were injured, 49 civilian facilities and 248 houses were damaged as a result of heavy artillery shelling of settlements by the Armenian Armed Forces from September 27 to October 4, according to the reports.

Combat operations are being conducted along the Line of Contact in the occupied Azerbaijani lands, marking the most intense fighting between Armenian and Azerbaijani forces since a ceasefire agreed in 1994. As a result of retaliation, Azerbaijani troops liberated a number of territories previously occupied by Armenia, as well as retake important strategic heights under control.

Over the past two days, the positions of the units of the Azerbaijan Army and human settlements in the country are being subjected to intensive shelling from a military unit deployed in Ballija, north of Khankendi, the central city of the occupied Nagorno-Karabakh region. The Azerbaijani defense ministry has repeatedly warned the Armenian army with taking adequate measures against the positions in Ballija.

The occupation of Azerbaijan's Nagorno-Karabakh region by Armenia came after both nations gained independence following the Soviet Union’s dissolution in 1991. Armenia launched military campaign against Azerbaijan with the aim of occupying the Nagorno-Karabakh region. A large-scale war between the two countries lasted until a ceasefire deal was reached in 1994. As a result of the bloody war, Armenia occupied 20 percent of Azerbaijan’s internationally recognized territories – the Nagorno-Karabakh region and seven surrounding districts. Azerbaijan faced a humanitarian crisis during the war, in which 30,000 of its citizens were killed, while one million others were forcibly displaced from their homeland.