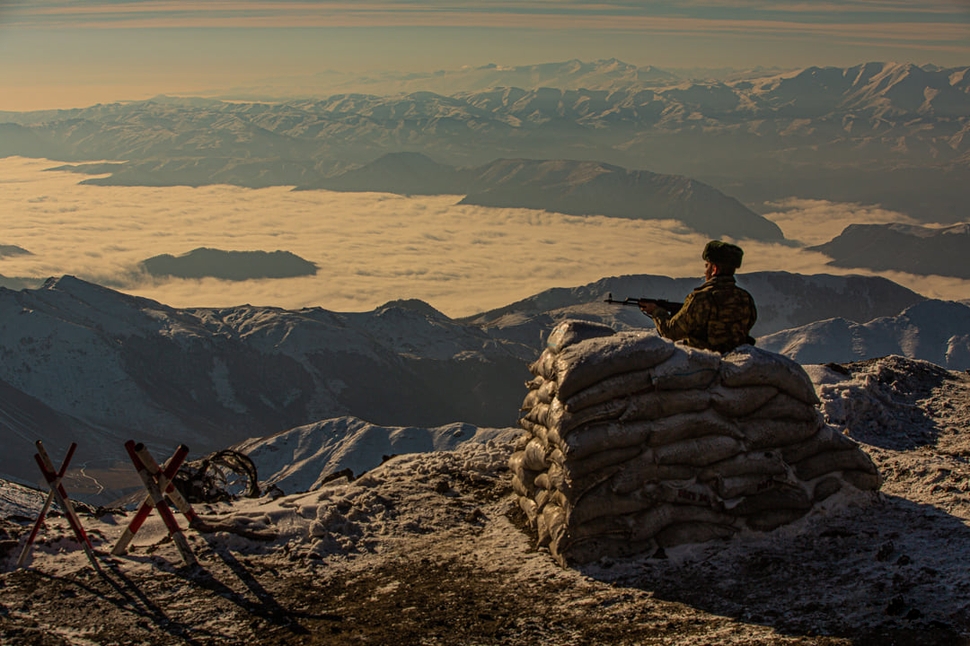 An Azerbaijani soldier stationed in an observation post in the Kalbajar district, Azerbaijan, December, 2020 / Reza Deghati

The situation on the Armenia-Azerbaijan border remains tense as Armenian forces target Azerbaijani military positions nearly every day. The latest escalation of violence took place on Wednesday when the Azerbaijani forces came under fire twice within hours.

Azerbaijan’s Defense Ministry reported that the Armenian forces fired at Azerbaijani military posts in the country’s Kalbajar district in the morning on July 28. According to the ministry, the Armenian military has been using 120-mm mortars and tanks to shell the posts of the Azerbaijani army.

"We accepted Russia’s initiative to declare a ceasefire on the Armenian-Azerbaijani state border starting from 10:00 Baku time. In spite of this, the Armenian side continues to aggravate the situation and shell our positions," the ministry said in a statement on Wednesday.

Earlier on the dawn of July 28, the same positions of the Azerbaijani forces have been targeted by the Armenian troops triggering retaliatory measures for suppressing the attack. The attacks resulted in injuries of two servicemen of the Azerbaijani army that have been immediately hospitalized.

Escalations on the Armenia-Azerbaijan border have been common after a bloody war between the sides in the latter’s Karabakh region last year. As a result of the 44-day war that broke out on September 27, 2020, the Azerbaijani army liberated over 300 settlements, including five major cities from nearly 30-year-long illegal Armenian occupation. The war ended in a tripartite ceasefire statement signed on November 10 by Armenia, Azerbaijan, and Russia. Armenia returned three more districts to Azerbaijan’s control within its obligations under the agreement.

Azerbaijan restored control of a larger portion of its 1,007-kilometer borderline with neighboring Armenia after the liberation of the districts of Zangilan, Gubadli, Kalbajar, and Lachin. After regaining access to the border, Azerbaijan rolled out border protection measures. Azerbaijani officials described activities on the border as legal measures in line with maps available to both Armenia and Azerbaijan.

The Azerbaijani government has called on Armenia's authorities to recognize each other’s territorial integrity and borders, and start working on delimitation and demarcation procedures. Baku is convinced that there should be a peace agreement between Armenia and Azerbaijan.

Charles Michel, President of the European Council, supported Baku’s proposals during a recent press conference with President Ilham Aliyev in Baku, highlighting the importance of delimiting the borders between Azerbaijan and Armenia. Michel has publicly offered assistance in achieving peace in the region.

Armenia, however, has been responding to Azerbaijan’s peace proposals with border provocations.

Armenian forces committed 13 armed provocations in different directions, including in Kalbajar, Nakhchivan, Gadabay, and Tovuz on the Armenia-Azerbaijan state border since early July.

Russia-based military analyst Igor Korotchenko is convinced that Armenia is not ready to sign a peace treaty with Azerbaijan at least in the current circumstances. Because, the analyst explains, the basic principle of Armenia's foreign policy remains territorial claims to the Karabakh region of Azerbaijan.

"On the conditions that are being put forward by the Armenian side, there will be no agreements between Baku and Yerevan," Sputnik Azerbaijan quoted Korotchenko as saying.