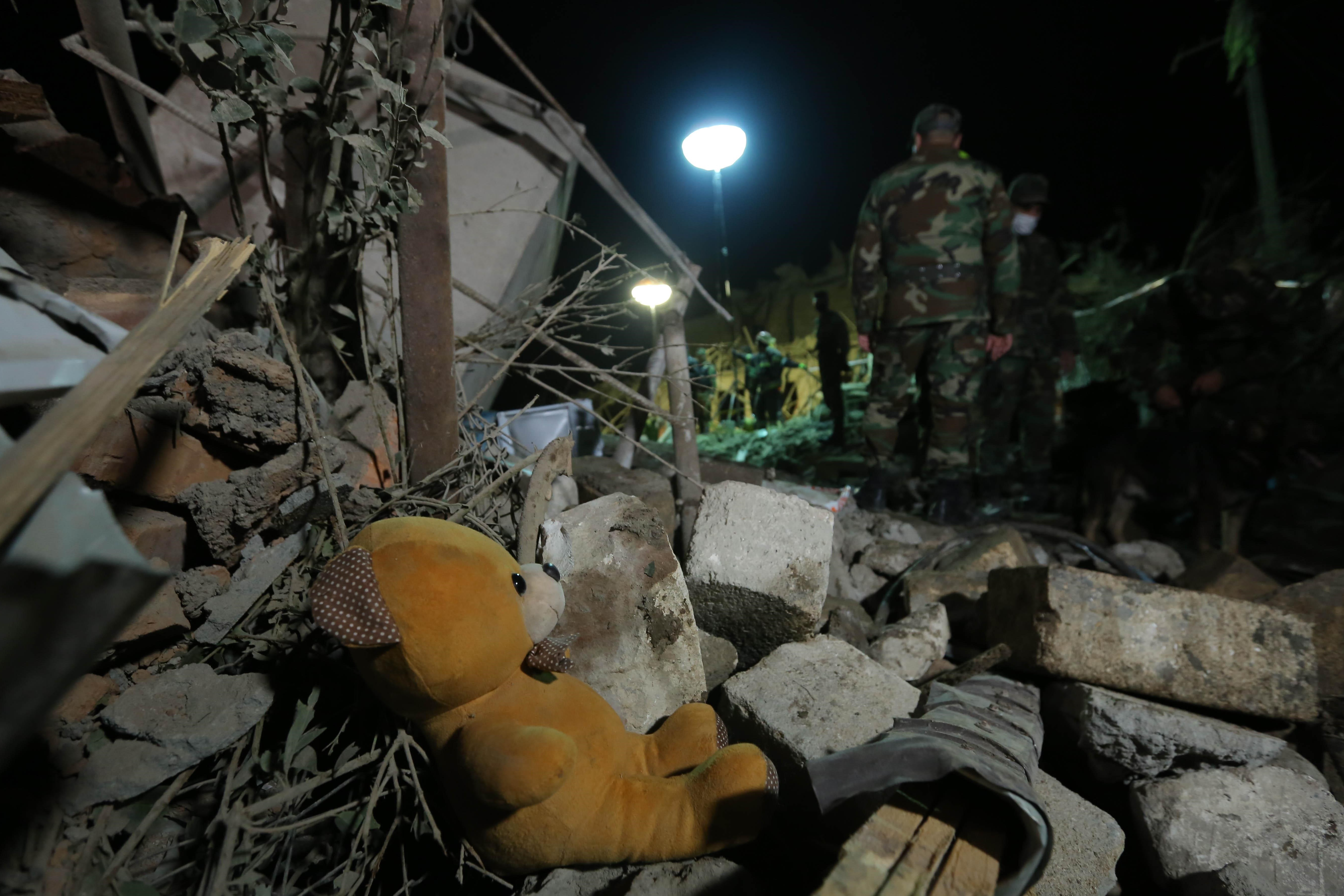 At least 13 civilians have been killed, including 2 children, over 52 people injured in the second biggest city of Azerbaijan, Ganja, as a result of a ballistic missile attack by the Armenia's armed forces for the third time on the twentieth day of the heavy clashes over the occupied Nagorno-Karabakh region of Azerbaijan. / Report.Az

At least 13 civilians have been killed and more than 52 people injured in Ganja, the second biggest city of Azerbaijan situated far away from the frontline, as a result of the Armenian armed forces’ ballistic missile attack — for the third time in the 20 day of the heavy clashes over the occupied Nagorno-Karabakh region of Azerbaijan.

According to Azerbaijan’s Ministry of Emergency Situations, so far at least 13 bodies and 52 injured, including children, have been removed from wreckages after the rocket fire on Ganja at 01:00 local time on October 17, which was a gross violation of the humanitarian ceasefire and international humanitarian law by the Armenian army.

“This, third in a row atrocious attack on the second biggest city of Azerbaijan, since the new aggression of Armenia against Azerbaijan, situated far away from the frontline caused serious civilian casualties,” the press service of the Ministry of Azerbaijan’s Foreign Affairs said in a statement.

“Armenia’s deliberate and indiscriminate targeting of civilians, in a blatant violation of norms and principles of international law, including international humanitarian law, as well as declared humanitarian ceasefire, the purposeful killing of peaceful people constitute a war crime and a crime against humanity.”

Previously, on October 11, Armenia’s forces launched Elbrus tactical ballistic missile on Ganja, which is more than 60 km away from the conflict zone, destroying completely two residential buildings to kill 10 and wound 34 civilians. On October 4, one Azerbaijani civilian was also killed and 32 others injured in the first Armenian missile attack on residential areas of Ganja. R-17 Elbrus, designated as SS-1C Scud-B by NATO, is a Russian-made short-range ballistic rocket with a range of up to 300 kilometers. It is able to carry 985 kilograms of conventional and 5-80 kilotons of nuclear warheads.

“SCUD Ballistic Missile attack and indiscriminate killing of civilians by Armenia's Nikol Pashinyan in Ganja is the same tactic and missile system used by Saddam Hussein against civilians,” Assistant of the Azerbaijani President and Head of Foreign Policy Affairs Department of the Presidential Administration Hikmet Hajiyev said in a tweet on October 17.

In his address to the nation, Azerbaijani President Ilham Aliyev described the missile attack on Ganja city as another “war crime."

“Armenian leadership is committing a war crime. Shooting at civilians, including firing missiles, is a war crime, and they must and will bear responsibility for this crime," President Aliyev stated.

"We are giving their answer on the battlefield. We are avenging and will continue to avenge the deaths of our martyrs, of innocent civilians on the battlefield,” he said adding that Azerbaijan had never fought and would never be fighting against the civilian population.

President Aliyev also announced the liberation of the city of Fuzuli and seven villages of Fuzuli district from the Armenian occupation.

The renewed clashes between the Armenian and Azerbaijani forces broke out on September 27 with Armenia’s troops shelling heavily the military positions and civilian settlements of Azerbaijan. The attack prompted immediate counter-attack measures by the Azerbaijani army. Currently, military operations are being conducted in the territory of Azerbaijan, marking the fighting most intense since a ceasefire that was reached in 1994. Armenia's shelling the densely populated residential areas in multiple zones, including major cities of Azerbaijan situated far from the frontline, have killed 60 and wounded 270 civilians to date.

Armenia and Azerbaijan have been locked in a decades-old conflict over the Nagorno-Karabakh region, which is the internationally recognized territory of Azerbaijan but occupied by Armenia. Following the Soviet Union’s dissolution in 1991, Armenia launched a military campaign against Azerbaijan that lasted until a ceasefire deal reached in 1994. Armenia occupied 20 percent of Azerbaijan’s internationally recognized territories including the Nagorno-Karabakh region and seven surrounding districts. One million ethnic Azerbaijanis were forcibly displaced from these areas and 30,000 were killed.