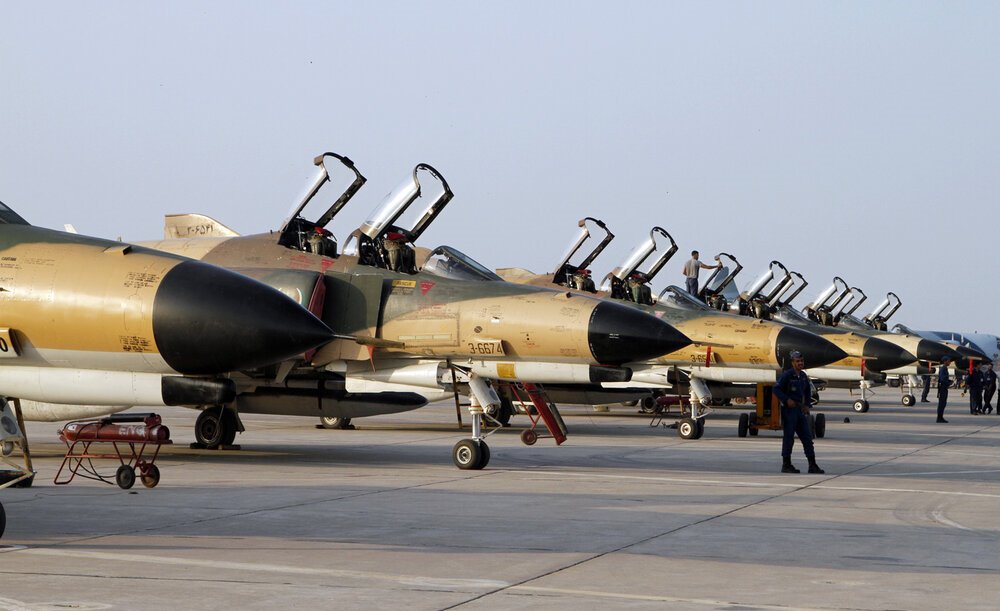 The second joint aerial drill between Iran’s Air Force and Iranian Aerospace Force of the Islamic Revolutionary Guard Corps (IRGC) was carried out on September 20 in the southern city of the country, Bandar-e Abbas. / MEHR News Agency

The second joint aerial drill between Iran’s Air Force and Iranian Aerospace Force of the Islamic Revolutionary Guard Corps (IRGC) was carried out on September 20 in the southern city of the country, Bandar-e Abbas.

The drill which had been conducted in the Persian Gulf was touted as preparation for participating in massive parades to be held throughout Iran on 22 September, marking the beginning of Iran’s Sacred Defense Week, an annual commemoration of the 1980–1988 Iran–Iraq War, Mehr news agency reported.

Various combat, tactical, reconnaissance, transport, and tanker aircraft of the Iranian air forces were present on the second day of the drills. On the first day of the preparatory drills on September 18, Iranian warplanes took off from Shahid Abdolkarimi Airbase in the port city of Bandar Abbas in southern Iran.

“Such flights represent the ability of our fighter jets to operate in united groups, which requires [a coordinated demonstration of] logistical, technical, and engineering capabilities,” the Commander of the Islamic Republic of Iran Air Force (IRIAF) Brigadier General Aziz Nasirzadeh said, adding that “the purpose of the aerial parades is to display our power”, Iranian Labour News Agency reported on September 20.

In addition to the jet fighters, 200 frigates and speedboats will also display the country’s naval power during the parade on September 22.

Nasirzadeh also said that fighter jets from Hamedan, Isfahan or Shiraz airbases will fly at about 800 kilometers per hour (kph) with intervals less than a few seconds over Tehran’s airspace as part of the parade, which would be a great challenge.

In capital Tehran, the parades are held at the mausoleum of the late founder of the Islamic Republic, Imam Khomeini, in the south of the city. President Hassan Rouhani will also attend the military parades in Tehran. Similar parades will also be held in other Iranian provinces to commemorate the Iran-Iraq war.

Every year, various units of the Iranian Armed Forces from the Navy, Air Force, Army Ground Force, Airborne division, the IRGC, and Police hold parades on this occasion, displaying the most recent achievements of the Iranian armed forces in the missile industry, equipment for the ground, naval, and air defense forces, as well as communication gear.

The countrywide parades are to be held at a time when the US is forming a naval mission, already joined by Saudi Arabia, the United Arab Emirates, and the United Kingdom, purportedly aimed at protecting shipping lanes in the Middle Eastern waterways.

On September 20, General Yahya Rahim-Safavi, top military adviser to the Iranian Leader and a senior IRGC general warned the US against any anti-Iran move, saying "if the Americans think of any plot, the Iranian nation will respond from the Mediterranean, to the Red Sea and to the Indian Ocean," Entekhab news website reported.