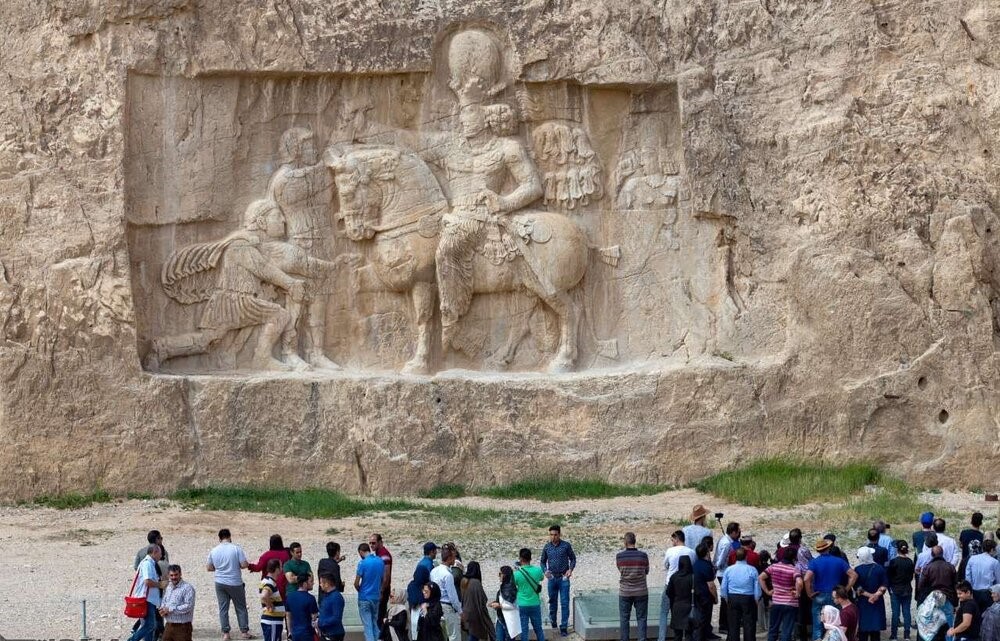 A rock relief showing the Sassanian king Shapur I on horseback, with the Roman Emperor Valerian bowing to him in submission, are among the other significant surviving relics of Naqsh-e Rostam in the southern Iranian province of Fars. / MEHR News Agency

A historical bas-relief carving has recently been discovered in a royal rock-hewn necropolis in Iran’s Fars province.

The sculpture bears the Pahlavi-Sassanid script and dates back to the Sassanid Empire (224 CE–651). It was discovered near Naqsh-e Rostam, an ancient necropolis located about 12 kilometers northwest of Persepolis, among a group of ancient Iranian rock reliefs cut into the cliff, IRIB news agency reported on April 28.

The experts are currently deciphering codes of the relief, which is located at the top of Hossein mount, the head of the cultural heritage organization of Fars province, Hamid Fadaei said.

The inscription is written in the Pahlavi language, the official language of the Sassanian Empire.

An Aramaic-derived alphabet was used for writing in Pahlavi. The script is very difficult to read due to the use of heterograms. The heterograms were words written in Aramaic but read as their Middle Persian equivalent, according to Radio Farda.

In June 2018, UNESCO added a group of Sassanian historical cities in the Fars province dubbed as the “Sassanid Archaeological Landscape of Fars Region” to its World Heritage Site list.

In early April, the deep drilling of wells near Naqsh-e Rostam was banned over probable subsidence of land and damage to the ancient site. The drilling new wells is subject to gain official permission from the cultural heritage, tourism and handicrafts department of Fars Province.

In recent decades, the decline of groundwater tables has resulted in ground sinking and relics in Naqsh-e Rostam being damaged or at risk of further deterioration. Some experts accuse the Iranian government of not putting enough effort into the preservation of pre-Islamic relics.

Naqsh-e Rostam incorporates memorials of the Elamites, the Achaemenids and the Sassanians, where four Persian Achaemenid kings - Darius II, Artaxerxes I, Darius I and Xerxes I - are laid to rest. These four large tombs cut high into the cliff face, and these have mainly architectural decoration, but the facades include large panels over the doorways, each very similar in content, with figures of the king being invested by a god, above a zone with rows of smaller figures bearing tribute, with soldiers and officials.

Beneath the funerary chambers are dotted with seven Sassanian era bas-reliefs cut into the cliff depicting vivid scenes of imperial conquests and royal ceremonies.