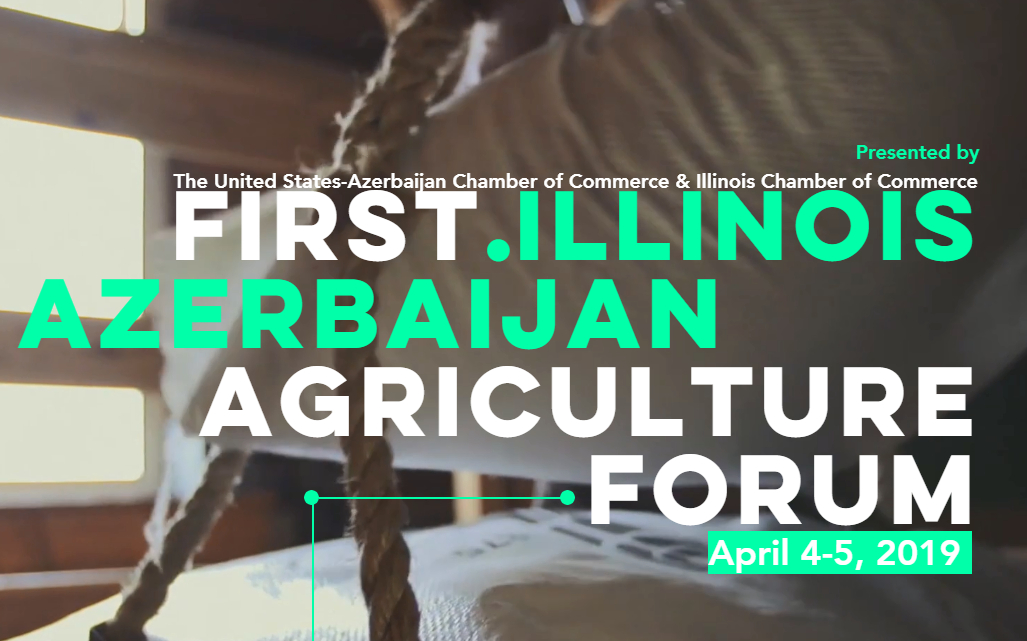 A two-day forum called the Illinois-Azerbaijan Agriculture Forum, meant to explore agrarian cooperation between middle America and the Caspian country, will be held in the mid-western state from April 4-5 / Agroforum.Us

Agriculture and Azerbaijan are not two things that come to mind when Americans think about farming, but they soon may. A two-day forum called the Illinois-Azerbaijan Agriculture Forum, meant to explore agrarian cooperation between middle America and the Caspian country, will be held in the mid-western state from April 4-5.

The United States-Azerbaijan Chamber of Commerce and Illinois Chamber of Commerce are sponsoring the event, which is expected to lead to international partnerships as well as trade and investment opportunities. Field experts, private sector executives and representatives, agricultural machinery manufacturers, and agriculture authorities from Illinois and Azerbaijan are scheduled to attend what is the first forum of its kind. The American agricultural machinery company John Deere is already slated as a participant.

The forum’s agenda includes panel discussions on bilateral trade and investment; educational and vocational training; and successful farming models, including aquaculture. Tours of the Harvester Works factory, the John Deere Pavilion and World Headquarters Display Floor, as well as the family-owned robotic Cinnamon Ridge dairy farm are also part of the two-day program.

Illinois and Azerbaijan may be worlds apart, but they are both rich agricultural areas. The American Midwestern state’s 72,200 farms produce massive amounts of soybeans and corn and have plenty of pig farms. The state's climate and varied soil allow farmers to develop multiple cropping, meant to grow and raise many other agricultural commodities such as wheat, oats, sorghum, hay, fruits and vegetables, as well as poultry, cattle and sheep. Specialty crops like buckwheat, horseradish, and Christmas trees are known to grow there.

According to the U.S. Department of Agriculture National Agricultural Statistics Service, agricultural and farm income from the sale of Illinois' agricultural commodities both locally and globally accounts for more than $19 billion annually. Corn makes up the bulk of that total, at 54 percent.

In Azerbaijan, agriculture is the third largest industry after the oil and gas industry, and construction. Agriculture employs nearly 40 percent of the population’s workforce and generates 6.2 percent of the gross domestic product, according to the Agrarian Loan and Development Agency of Azerbaijan.

Although Azerbaijan has long been a known exporter of its crops to what were once fellow Soviet republics, transition from obsolete Soviet-era machinery to European and American equipment following the country’s regaining of its independence from the USSR in 1991 reinvigorated the agriculture industry.

Crop exports have grown by 6.3 times over the last 15 years, according to a recent report by the Minister of Agriculture, Inam Karimov. In 2017, agricultural exports of Azerbaijan accounted for $570.5 million or 40.3 percent more than in 2016.