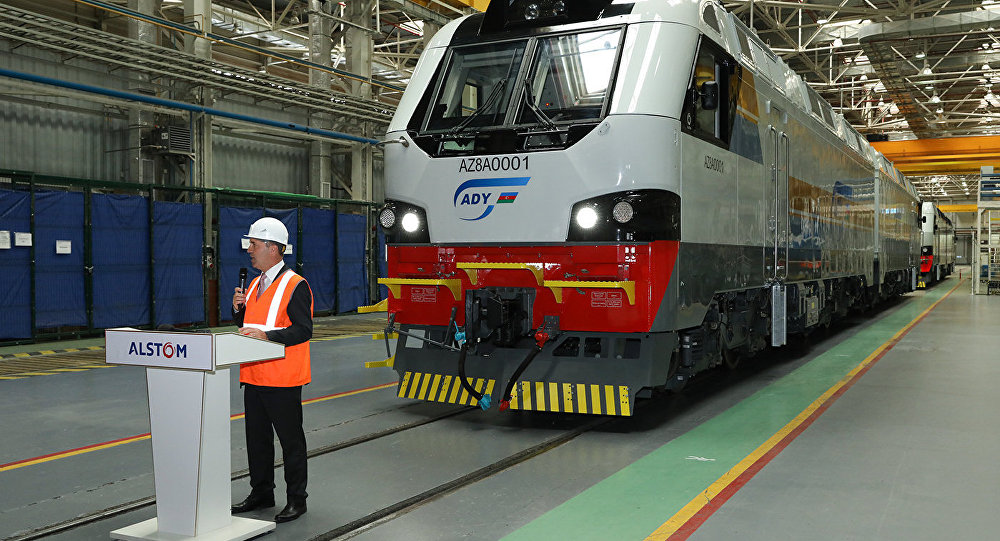 Alstom has been developing the AZ8A model at a manufacturing hub in Kazakhstan’s capital city of Astana, where the unit was first unveiled to the public on June 27, 2018 / Azerbaijan Railways Press Service

France’s transportation engineering company Alstom announced that it is almost ready to ship the first in an order of modern locomotives to Azerbaijan. The AZ8A model of the Prima T8 brand heavy freight locomotive will be received by Azerbaijan Railways’ rail depot sometime in late December.

“After the test phase in Kazakhstan, the first cargo locomotive AZ8A Prima T8 will arrive in Azerbaijan in the second half of December,” an unnamed official told Trend news agency. "From February 2019, the first locomotive AZ8A will be launched in test mode between the stations of Ganja and Boyuk-Kesik.”

Alstom and Azerbaijan Railways will conduct pre-tests on the railway in January. The route is an integral part of the Baku-Tbilisi-Kars railway that passes from Azerbaijan through neighboring Georgia, and ends in far eastern Turkey.

Fifty locomotives are destined for Azerbaijan under a $324.5 million deal struck between Azerbaijan Railways and EKZ, a joint venture of Alstom, and Russia’s largest manufacturer of locomotives and rail equipment, Transmashholding. Forty AZ8A Prima T8 cargo and 10 Prima M4 AZ4A passenger locomotives form the order, which had been placed in 2014.

Alstom has already supplied one out of the 10 passenger locomotives last November. By 2021, all 50 carriages will have been sent to the Caspian country.

Alstom has been developing the AZ8A model at a manufacturing hub in Kazakhstan’s capital city of Astana, where the unit was first unveiled to the public on June 27. The eight-axle car is considered one of the world’s most powerful electric locomotives. The two-section freight locomotive hauls up to 9,000 tons of cargo and runs along long-distance routes at 120 kilometers per hour (74.5 miles per hour) with installed continuous power of 8.8 megawatts. Hi-tech features allow it to run in an energy-saving mode, making it environmentally friendly when compared to traditional freight carriages.

The carriage is equipped with a climate control system and storing facilities. Cabins comply with modern-day ergonomics and safety regulations that ensure the safety and comfort of cargo and passengers alike. According to information available on the manufacturer’s website, maintenance and lifecycle costs are ultimately lower with the AZ8A model thanks to its cutting-edge modular design.