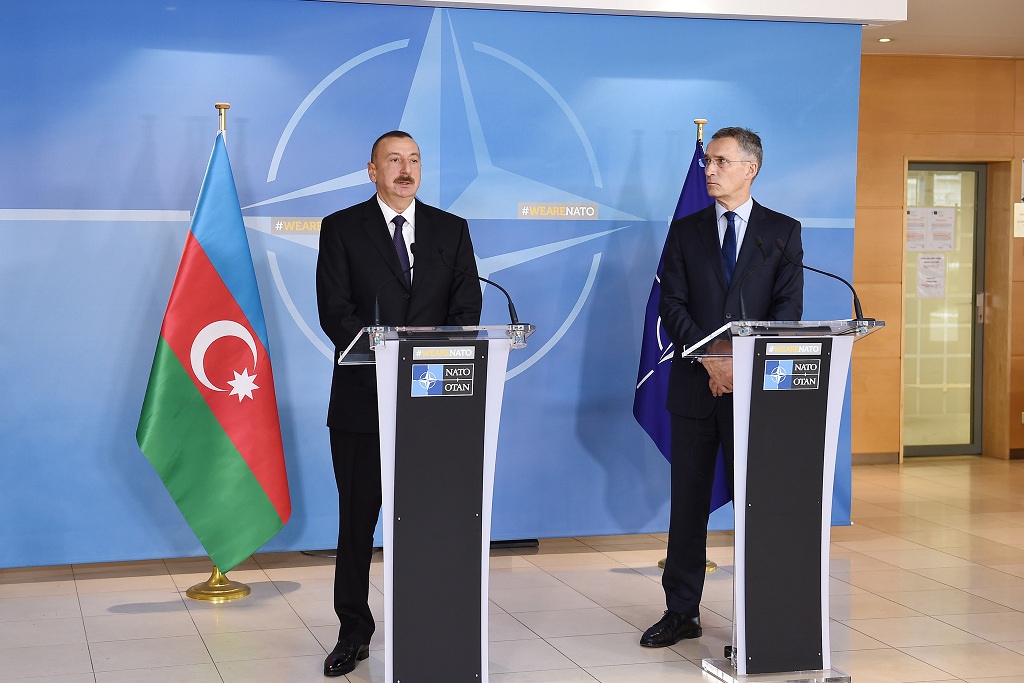 Azerbaijan’s relationship with NATO was in the spotlight this week during Azerbaijani President Ilham Aliyev’s visit to Brussels on November 23, when he met with the NATO Secretary General Jens Stoltenberg. There he reviewed Azerbaijan’s contributions to Afghan security in the framework of the security bloc, and said the biggest threat to regional security in the Caspian and South Caucasus region is the unresolved Nagorno-Karabakh conflict.

“Our cooperation has already good history. Azerbaijan participated in many NATO operations: in KFOR (Kosovo Forces), in ISAF (International Security Assistance Force), and now Azerbaijan is contributing to Resolute Support Mission,” Aliyev said during a joint press conference in Brussels, according to the president’s official website.

Azerbaijan has been contributing to the 29-member military coalition’s operations since 1992, shortly after the country was founded following the collapse of the Soviet Union. Contributions to ISAF in particular have included sending nearly 100 servicemen to Afghanistan to help provide security to a television tower station in Kabul, a central ammunition depot, and conduct regular patrols in the capital. Since January 2015, Azerbaijan’s peacekeeping contingent of 94 soldiers has operating under the NATO’s mission known as Resolute Support, and was tasked with providing security of Kabul International Airport.

In 1994, Azerbaijan teamed up with NATO through the Partnership for Peace program, which led to the creation of an Individual Partnership Action Plan (IPAP) that is revised and agreed upon every two years. IPAPs require holding regular political dialogues, systematizes bilateral cooperation as an overarching tool, and agreeing on new areas of cooperation of mutual interest in a more flexible manner.

“The biggest threat to regional security is unresolved conflict between Armenia and Azerbaijan. For many years, our territories are under Armenian occupation. More than one million Azerbaijanis became refugees and internally displaced persons. Ethnic cleansing policy was conducted against Azerbaijanis and the situation is not changing unfortunately,” Aliyev said Thursday, bringing one of the worlds long-lasting conflicts into the spotlight.

“The resolution of the conflict must be based on relevant resolutions of Security Council of United Nations and territorial integrity of Azerbaijan,” Aliyev noted, stressing the significance of four resolutions that were passed by the body in 1993 and calling for Armenia to withdrawal all of its forces from Azerbaijan, but go unfulfilled.

The war ended in a ceasefire signed in 1994, but violations are not uncommon. The two sides last went to war in April 2016, and over a period of four days Azerbaijan managed to regain some of key strategic outposts on the Line of Contact.

Stoltenberg called the conflict “a matter of concern.”

“It is clear that there is no military solution to this conflict. And NATO has no direct role, Stoltenberg said. “We support the work of the OSCE Minsk Group co-chairs. And I am encouraged to hear about your renewed dialogue with the President of Armenia,” Stoltenberg said, referring to the co-chairmanship that was set up in 1992 by the OSCE to help resolve the issue peacefully.

The presidents of Armenia and Azerbaijan last met in October in Geneva. Next month, their respective foreign ministers will meet in Vienna to take up the issue.