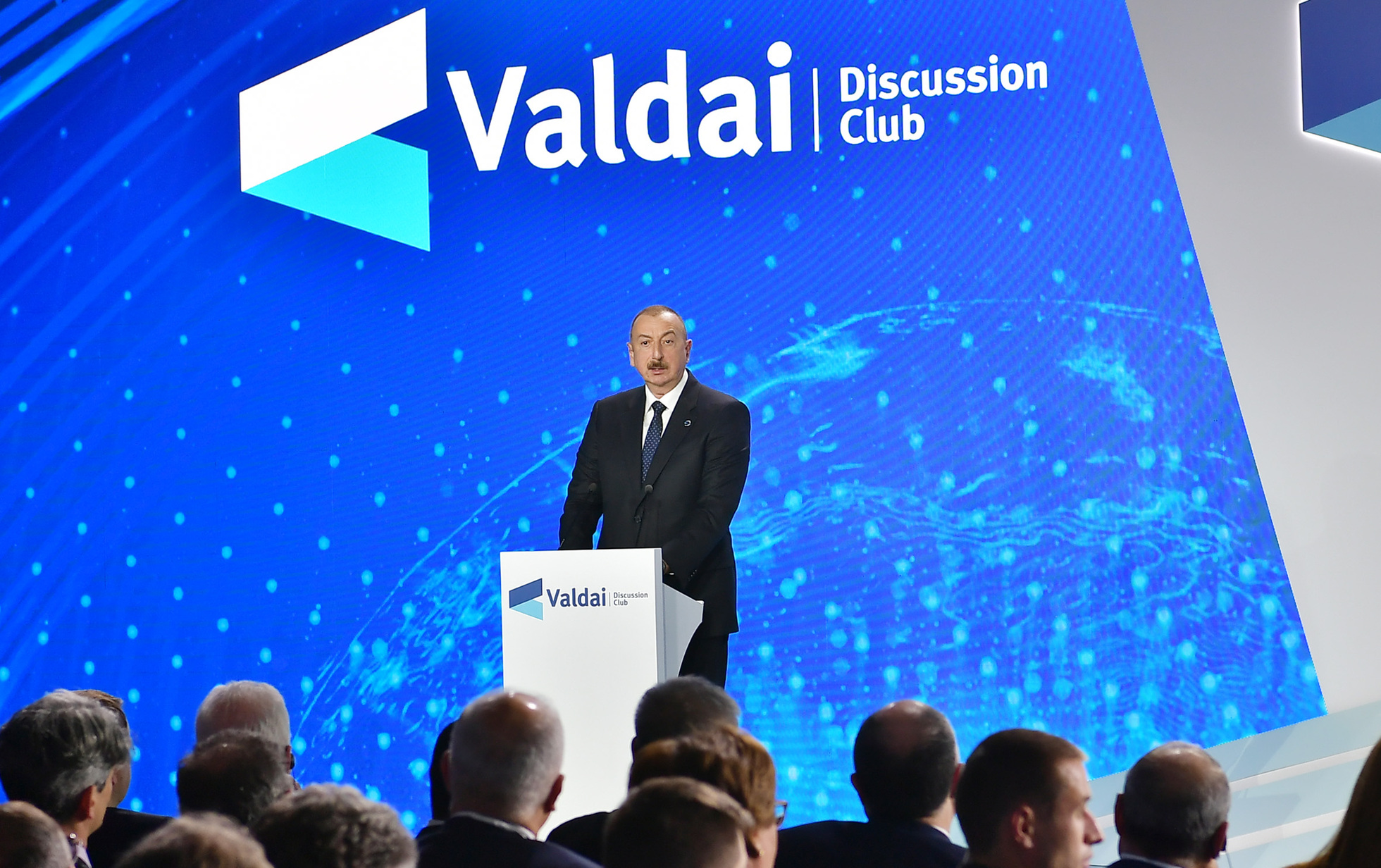 President of the Republic of Azerbaijan Ilham Aliyev delivers a speech at the annual plenary session of the Valdai International Discussion Club, Sochi, Russia, October 3, 2019 / President.Az

President Ilham Aliyev gave a speech in the Black Sea coastal city of Sochi, Russia on Thursday, reiterating the high importance of the unresolved Armenia-Azerbaijan Nagorno-Karabakh conflict, which has been brewing for over a quarter of a century in the South Caucasus region.

“Nagorno-Karabakh and seven other regions of Azerbaijan have been under Armenian occupation for more than 25 years. Nagorno-Karabakh is originally Azerbaijani land,” President Aliyev said at the 16th annual plenary session of the Valdai International Discussion Club in Sochi, according to Moscow-Baku.ru. “In Soviet times, the Nagorno-Karabakh Autonomous Region was created. I must say that in connection with the conflict there is a fairly wide range of opinions, often not reflecting realities.”

“So, in order to clarify, I must say that in 1921 the decision of the Caucasus Bureau [of the Soviet Communist Party’s Central Committee] was, literally, to leave Nagorno-Karabakh as part of Azerbaijan, and not to give it, as the Armenian side often interprets.”

President Aliyev highlighted the fact that the region, which is an internationally recognized part of Azerbaijan but occupied by Armenia, has lost its indigenous Azerbaijani population in the wake of forcible expulsion.

The Nagorno-Karabakh region is located in the western part of central Azerbaijan and has historically been populated by ethnic Azerbaijanis, until the relocation of Armenians there by Tsarist Russia starting as early as in the 19th century. With the occupation of the South Caucasus region by the Russian Empire in the 19th century, dozens of thousands of Armenians from Anatolia and Iran were settled by the Tsarist regime in the Karabakh, Iravan, Zangezur, Goyche and other historical lands of Azerbaijan. The increase in the number of Armenians in the Karabakh region has led to ethnic conflict with the indigenous Azerbaijani population.

The occupation of Azerbaijan's Nagorno-Karabakh region by Armenia came after both nations gained independence following the Soviet Union’s dissolution in 1991. Armenia kicked off military aggression against Azerbaijan to occupy the Nagorno-Karabakh region, which sparked a bloody war that lasted until a ceasefire in 1994. But by then, the region, along with seven surrounding districts, had been occupied by Armenia. More than 30,000 Azerbaijanis were killed and approximately one million became displaced within the country due to the war.

Although Nagorno-Karabakh is not recognized as independent or part of Armenia by any country in the world, including by Armenia itself, Yerevan continues to push for the region’s independence. Armenia’s Prime Minister Nikol Pashinyan has barely tried to hide his sentiments on the issue, saying “Artsakh is Armenia, and that’s it,” using the name that Armenians use for the Nagorno-Karabakh region.

"Well, firstly, it is, to put it mildly, a lie,” Aliyev said in Sochi. “Karabakh by the whole world [with its] plains, uplands, is recognized as an integral part of Azerbaijan. Armenia itself does not recognize this illegal formation. Karabakh is a historical, original Azerbaijani land. So Karabakh is Azerbaijan and exclamation mark.”

President Aliyev said the only option for settling the Nagorno-Karabakh conflict is to adhere to the territorial integrity of Azerbaijan, the UN Charter, the UN Security Council Resolutions, and the Helsinki Final Acts.