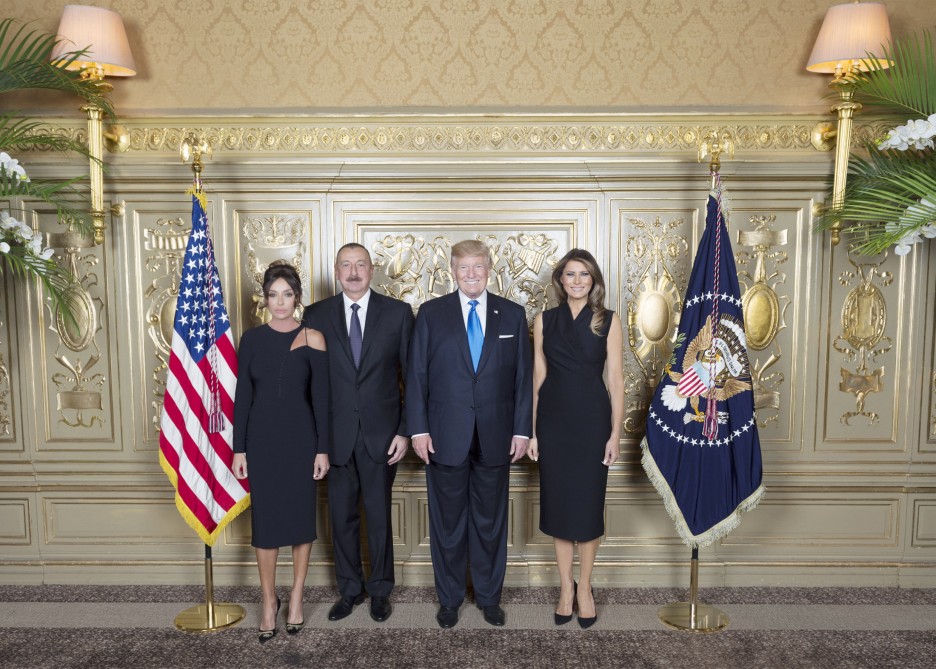 President Ilham Aliyev met President Donald Trump during the reception hosted by U.S. President in connection with the 72nd Session of the General Assembly of the United Nations in New York, September 21, 2017 / U.S. Embassy in Azerbaijan

In a letter addressed to U.S. President Donald Trump and penned in honor of the United States’ July 4th Independence Day holiday, Azerbaijan’s President Ilham Aliyev emphasized multifaceted strategic cooperation between Baku and Washington, including the U.S. participation in seeking a peaceful solution to the decades-old conflict between Azerbaijan and its neighbor Armenia.

“The fact that the Nagorno-Karabakh conflict has not yet been settled remains our country`s most painful problem,” President Aliyev’s message to Trump read, according to the president’s official website.

“As a result of the Armenian military aggression against our country, Azerbaijan’s ancestral lands of Nagorno-Karabakh and seven surrounding regions were occupied, more than one million Azerbaijanis were forced to leave their native lands.”

Nagorno-Karabakh, a region that is internationally recognized as part of the sovereign territory of Azerbaijan, has been under Armenian occupation since the early 1990s.

President Aliyev’s letter to Trump cited the norms and principles of international law, the four United Nations Security Council resolutions passed demanding that Armenian troops withdraw from the region, and the provisions of resolution-related documents, such as the Helsinki Final Act, as the basis for settling the conflict once and for all.

“The conflict must be solved peacefully and fairly,” President Aliyev wrote, “within the framework of the territorial integrity of our country. In this regard, we pin great hopes on the continued and determined position of the United States, as a co-chair of the OSCE Minsk Group, and on your personal efforts, Mr. President.”

Armenia used the dissolution of the Soviet Union in 1991 – which included Azerbaijan and Armenia – as a cynical ploy to kick off a military campaign against and grab land from its eastern neighbor Azerbaijan. The plan was first revealed in the late 1980s when the partial Armenian population, living in Azerbaijan's Nagorno-Karabakh region alongside indigenous Azerbaijanis, staged protests chanting “Karabakh is ours.”

The two countries fought an all-out war from 1991 until a ceasefire in 1994. As a result of the full-scale war, Armenia forcibly occupied 20 percent of Azerbaijan's internationally recognized territory, which includes the Nagorno-Karabakh region and seven adjacent districts. The war claimed the lives of over 30,000 Azerbaijanis and expelled one million more from their homeland. Armenia has not relinquished control over the occupied lands, despite four United Nations Security Council resolutions, all passed in 1993, demanding that it do so.

The OSCE Minsk Group – formed in 1994 as mechanism co-chaired by Russia, France and the U.S. – was charged with mediating between Azerbaijan and Armenia, and helping them find a peaceful settlement in accordance with international law. But 25 years after the group first met, there seems to be no end in sight for settling the conflict.

The self-styled illegal regime in the occupied Nagorno-Karabakh region claims it represents the interests of Armenians living in the region – but Baku sees Yerevan’s hands all over it. Armenia helped illegal separatist forces in the region and set up a bogus regime that neither Azerbaijan nor any other country around the world recognizes as being legitimate.

In May, a member of the bogus regime, Masis Mayilyan, said that in order to get support for Nagorno-Karabakh’s aspirations to be independent, it would build ties with the self-proclaimed separatist regimes in the Donetsk and Lugansk regions of Ukraine.

During a visit to Baku in October, Trump’s National Security Adviser John Bolton said Washington has not changed its policy on the Nagorno-Karabakh conflict, saying, “the successful resolution of the issue is important. . . and the U.S. takes its role as one of the co-chairs of the Minsk Group very seriously.”