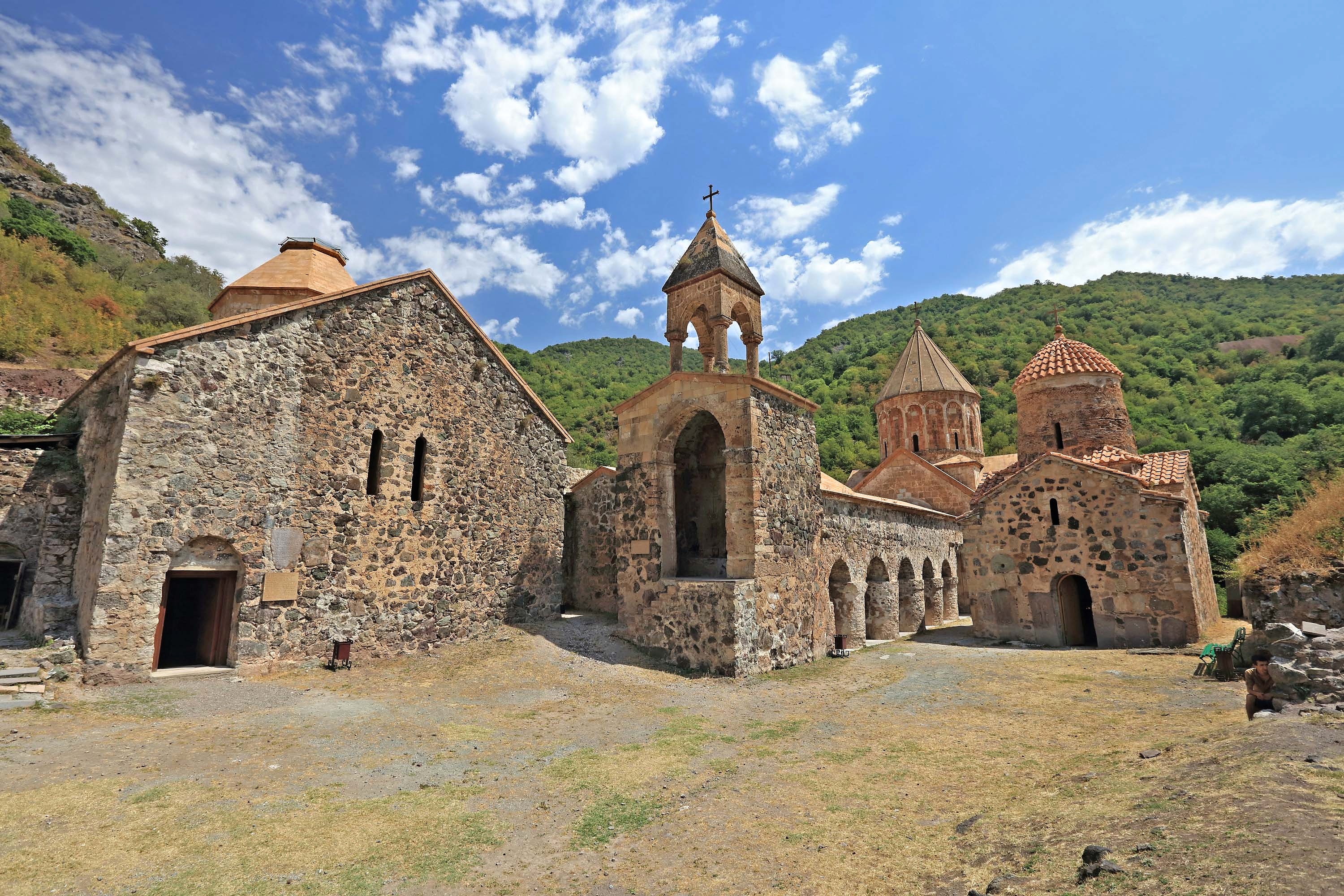 Khudavang monastery complex in the Kalbajar district of Azerbaijan / Wikipedia

Rafik Danakari, Deputy-director of the Albanian-Udi community in the Caspian country, was named as clergyman of the Khudavang monastery, making him the first priest from Azerbaijan to lead the Albanian temple after 27 years of its occupation by Armenia. The Khudavang complex returned to Azerbaijan along with the Kalbajar district once occupied by Armenia's forces.

"Kalbajar is not an ordinary place for us, there are many ancient Albanian temples in Kalbajar. We have come to the Khudavang temple today. We participate here as the religious heirs to the Albanian church," said Robert Mobili, Director of the Albanian-Udi community in Azerbaijan.

Khudavang or Dedeveng monastery, located in the Vang village of Kalbajar, was built in the VIII-XIII centuries during the reign of the ancient Azerbaijani state of Caucasian Albania where Christianity was the major religious belief. Caucasian Albania has no relation with modern-day Albania in the Balkans. Khudavang is one of the largest and most complete examples of Azerbaijan’s Christian heritage. Numerous construction inscriptions have survived in the Khudavang monastery, including the names such as Arzu, Tursun, Seyti, Hasan, Avag, Shams, Altun, Aghbuh, and Garagoz, which prove the Turkic identity of builders.

“As a representative of the Albanian-Udi Christian community of Azerbaijan and as a geologist, I can fully confirm that this is a purely Albanian church. This church is in no way related to the Armenian church," Mobili told Euronews.

He justified his words by the fact that building materials, knitting elements, elements of the cross, symbols, and architecture of the Khudavang complex differ from those that are inherent in the Armenian church.

Azerbaijan restored its sovereign rights over Kalbajar on November 25 after Armenia withdrew its forces from the region under the tripartite ceasefire statement signed by Azerbaijan, Armenia, and Russia. The legally binding document obliged Armenia to return the occupied Kalbajar and Lachin districts, as well as the occupied parts of the Aghdam district to Azerbaijan. By December 1, Azerbaijan regained control over all three districts that fell to Armenia's occupation in the first Karabakh war in 1991-1994.

Ethnic Armenians, who have been settled illegally in Kalbajar following the region's occupation in 1993, have ransacked the Khudavang monastery complex before leaving Kalbajar. The temple suffered serious damages after sacred items such as church bells and stones, artifacts and portraits, as well as the roof tiles were looted by both the Armenian preachers and worshippers.

Udins living primarily in the northern Gabala and Oghuz regions of Azerbaijan are direct descendants of Caucasian Albania. Nearly 4,000 Udins are settled in Gabala's Nij village and 100 live in Oghuz. There are two Alban temples in Nij. Members of this ancient tribe can also be found in the capital Baku, as well as the city of Sumgait of Azerbaijan. Russia, Georgia, Uzbekistan, and Kazakhstan are also home to the groups of Udins. The largest number of Udins in the world live in Azerbaijan.

The Azerbaijani Albanian-Udi religious community succeeded the Albanian (Caucasian) Independent Apostolic Church. The Albanian Apostolic Church, as the first apostolic church in the Caucasus, has a long history and has left indelible marks on the religious and cultural life of the people of Azerbaijan and the entire Caucasus. However, after various pressures and influences the Albanian Apostolic Church was abolished by the Russian empire in 1836. The invalidation of the church paved the way for the Armenian-Gregorian church to claim part of its cultural and spiritual heritage for the purpose of "Gregorianization."

Since then, Armenian church has adopted the "Gregorianization" of ancient Albanian temples as its policy and modified many buildings. For instance, after Kalbajar's occupation in 1993, the government of Armenia violated the 1954 Hague Conventions by falsifying the historical facts in order to present the Khudavang monastery as an Armenian Apostolic church named Dadivank.

The authorities of Muslim-majority Azerbaijan have repeatedly said that members of all religious beliefs in the country are free to follow their faith. In a statement issued on November 14, Azerbaijani President Ilham Aliyev said the Azerbaijani state will properly protect the Christian temples located in the territories returned to Azerbaijan under the trilateral statement, and Christians living in Azerbaijan will be able to use these temples.

Today, 24 Christian religious communities hold prayers in 14 churches in Azerbaijan. Four percent of the ten million population of Azerbaijan is constituted by the worshippers of the Russian Orthodox Church; Georgian Orthodox Church; Armenian Apostolic Church; Seventh-day Adventists; Molokan Church; Roman Catholic Church; other Christians, including evangelical churches and Jehovah’s Witnesses, as well as Jews and Baha’is, and the International Society of Krishna Consciousness, according to 2019 Report on International Religious Freedom: Azerbaijan released by the US Department of State.