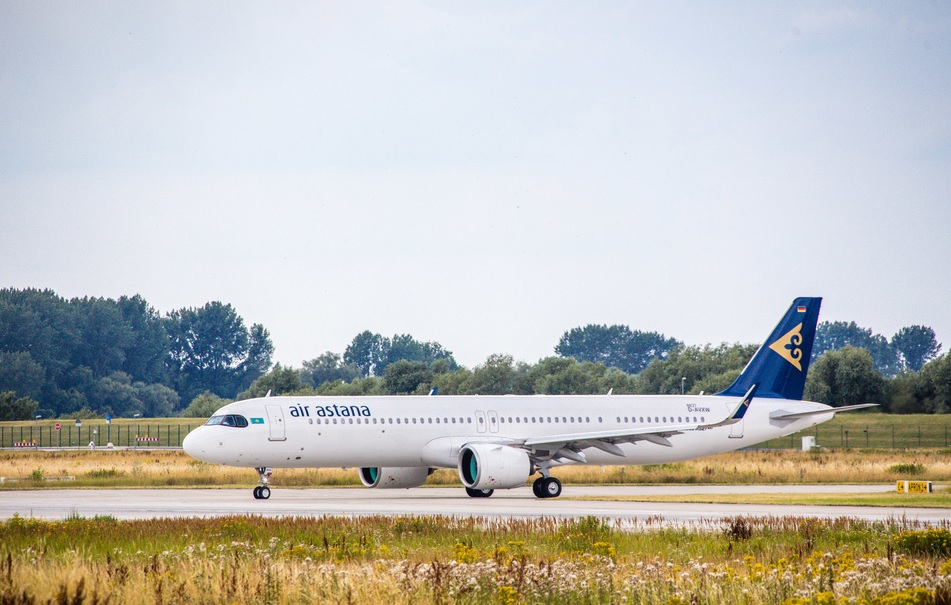 Air Astana has become the first airline within the former Soviet republics to operate what is considered a mid-size plane that is designed for international, long-haul routes of up to 7,400 km (4,598 mi). / FlightGlobal

“The new A321LR will gradually replace the Boeing 757 aircraft belonging to Air Astana’s fleet, which will also help reduce aviation emissions,” read a statement by Air Astana, according to InBusiness.kz.

The jet left for Kazakhstan following an agreement signed between Air Astana and Air Lease Corporation, an American aircraft leasing company that is headquartered in Los Angeles. Air Astana expects to buy a total of seven planes within the Airbus A320neo family in the next 12-18 months, according to the company’s statement.

Air Astana has become the first airline within the former Soviet republics to operate what is considered a mid-size plane that is designed for international, long-haul routes of up to 7,400 km (4,598 mi).

The A321LR is equipped with a newly designed cabin, which features comfortable seats that have additional legroom compared to most airlines. Airbus officials say the cabin of the jet will “provide passengers with a consistent experience, lights, colors and patterns that uniquely describe an airline’s brand.”

Air Astana’s A321LRs will have 166 seats in two classes, with 16 business seats in a two-by-two configuration, and 150 economy seats.

“The A321LR is an evolution of a very successful product, the A321. It’s a fantastic platform that historically has been appreciated for having the biggest single-aisle cabin available on the market, especially after the retirement of the Boeing 757,” said Cyril de Tenorio, product marketing manager, single-aisle family, Airbus, according to reports by Airline Passenger Experience Association.

Meanwhile, the aircraft comes with a choice of French-made CFM International LEAP-1A engines or PW1000G engines, manufactured by U.S. Pratt & Whitney. Kazakhstan’s purchases will be equipped with engines by Pratt & Whitney. According to the company’s data, the airplane saves 20 percent more fuel per flight than that of similar-sized commercial jets due to its new generation engine. In addition, specialized technology used in the engines dramatically decrease noise.

Air Astana is the largest carrier in Central Asia and operates flights to about 70 destinations throughout the world. In 2018, it flew roughly 4.3 million passengers, recording growth in passenger traffic by three percent and revenue by 10 percent compared to the same period in 2017.

Earlier this year the company was awarded a five-star rating by the Airline Passenger Experience Association for 2019. The rating was based on passengers’ evaluations of five parameters such as seat comfort, on-board service, food and drinks, the airlines’ entertainment system and Wi-Fi service.

According to Flight Global, 120 orders for the A321LR have been secured from 12 different airlines including Norwegian, TAP Air Portugal, Air Transat, Aer Lingus, Air Astana, Air Arabia and Azores Airlines, as well as Jetstar and Peach.