AI Has Arrived In Azerbaijan 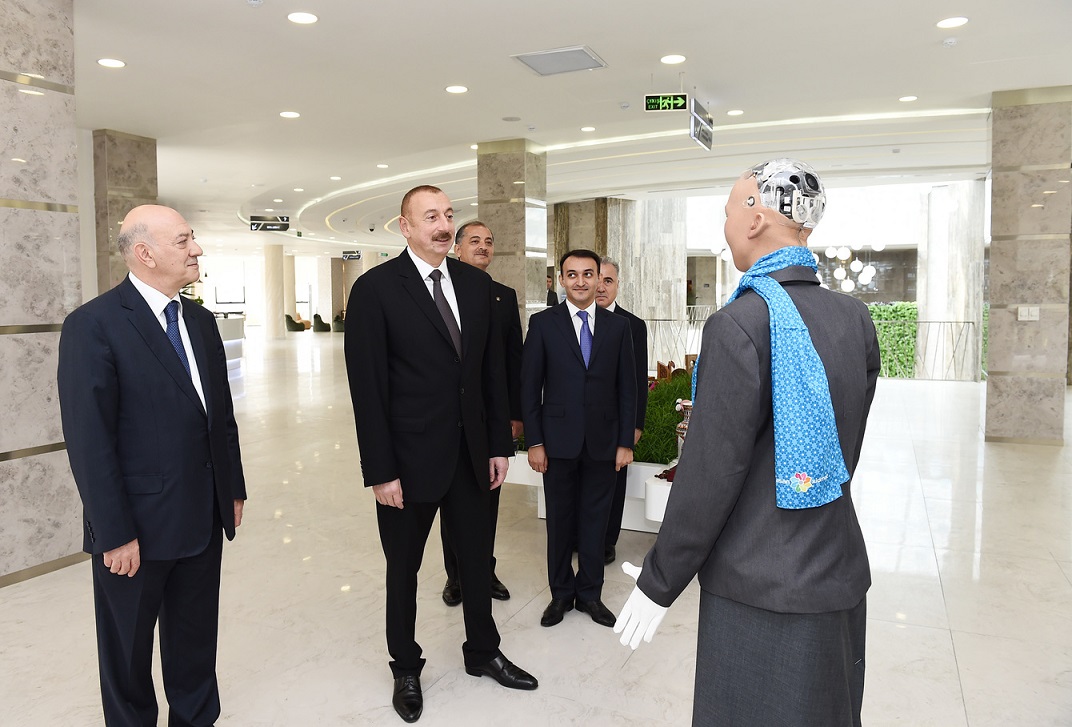 Artificial Intelligence, or “AI,” was once a thing of science fiction; but this week proves it is real and in Azerbaijan.

What is considered the most developed AI robot today made its – or rather “her” – debut at an event to launch new “ASAN Hayat” complex under the Azerbaijan Service and Assessment Network (ASAN), a national social innovation brand, held in central Azerbaijan on Monday and attended by President Ilham Aliyev. Sophia, as the robot has been named, can talk and express more than 60 human-like emotions.

Despite her incomplete knowledge of the Azerbaijani language, which belongs to the Turkic family of languages, Sophia managed to say salam, meaning “hello,” to President Aliyev before having a brief but intriguing conversation with him.

“As soon as I arrived at the airport I was given an ASAN visa,” Sophia told the president according to a read-out of the event on the president’s official website, referring to the high-tech electronic visa issuance service implemented last year. President Aliyev introduced ASAN to Sophia as the “national brand and national know-how” of Azerbaijan.

“I am also acquainted with the ASAN service concept, the Azerbaijani brand created by your initiative. I think ASAN service is a successful example of applying innovations in public administration,” she said in Azerbaijani.

While the Caspian country is best known worldwide for its vast hydrocarbon energy reserves, the country has also been selling intellectual products, too, thanks to ASAN, which means “easy” in Azerbaijani.

ASAN has been building a full government-to-citizen communication network, creating a one-stop-shop platform with 300 services. Easy municipal processes and access to civil services for citizens include things like birth and marriage registries, property deeds, identity cards, passports and driver’s licenses; and for foreigners, visas.

Sophia – the world’s first robot with a citizenship card from Saudi Arabia – got her visa thanks to ASAN. Foreigners and stateless persons, except those from visa-free countries, are offered two e-Visa options: standard e-visa and urgent e-visa. The standard form of an e-Visa takes three days to issue after an online application is placed, while three hours are enough to receive an urgent e-visa. Issuance of both types follows a single, three-step application process: Apply online, pay the required fee electronically, and download the e-Visa.

Thirteen ASAN service centers throughout Azerbaijan have received over 25 million applications to date since its inception in 2012. Five ASAN centers currently operate in the capital of Baku, while eight regional offices can be found in Sumgait, Ganja, Barda, Sabirabad, Gabala, Masalli, Guba and Mingachevir. ASAN offers also a “service on wheels” option, thanks to the use of 10 fully-equipped buses and a train that travel to those living in remote locations. Since its launch in 2013, over 1.5 million citizens have been served through mobile facilities.

What is organically Azerbaijani has become well-known beyond the country’s borders. European governments have praised ASAN’s efficiency and applicability for usage in other countries, including Afghanistan. ASAN won first place in the western Asian region for “Improving the Delivery of Public Services” in the 2015 United Nations Public Service Awards.

Sophia will be spending a few days in Azerbaijan to participate in Global Influencer Day, which brings together experts from around the world in the influencer marketing industry. Her creator is a Hong Kong-based American company called Hanson Robotics. Sophia will be featured as a keynote speaker at the three-day event that will kick off in Baku tomorrow.