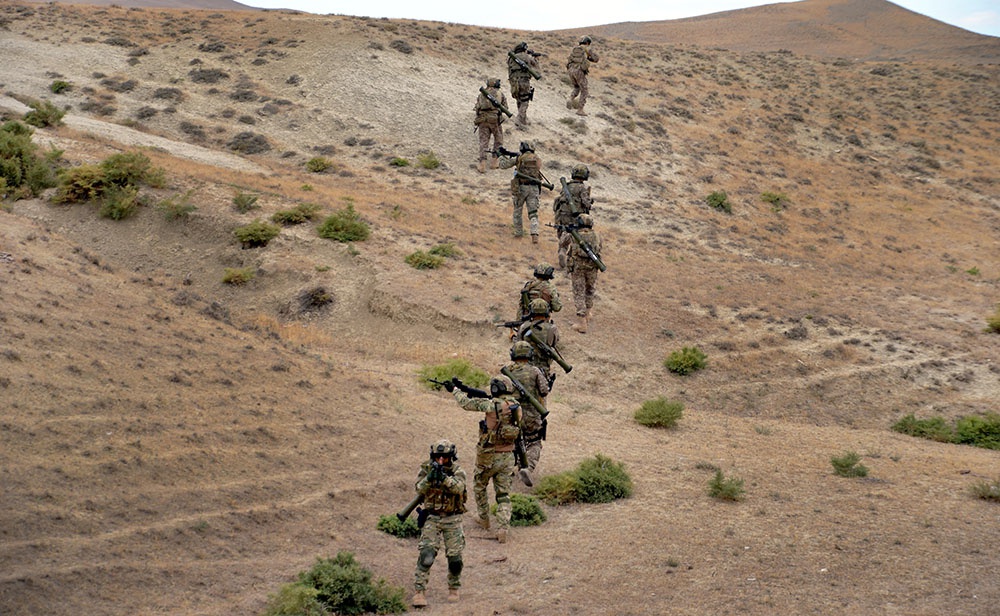 A photo from the "Caucasian Eagle 2019" military drills of the Azerbaijani, Turkish, and Georgian armed forces somewhere in Azerbaijan, September, 2019 / Mod.Gov.Az

The long-running conflict between two South Caucasus neighbors Armenia and Azerbaijan over the latter's Nagorno-Karabakh region has entered another decade, after talks in 2019 failed to bring the issue to a close.

“Armenian side has at a very high level said ‘new territories, new wars’, ‘no inch of territory back’ and finally, Armenian Prime Minister in occupied Khankendi city of Azerbaijan said that ‘Nagorno-Karabakh is Armenia'," Hajiyev said, quoting various remarks Armenian officials have made over the past year that indicated Armenia has no intention of withdrawing from the occupied Nagorno-Karabakh region, an internationally recognized part of Azerbaijan.

The Nagorno-Karabakh conflict broke out in the wake of the Soviet Union’s collapse in the early 1990s, when Armenia's armed forces invaded Azerbaijan and occupied the region, where ethnic Armenians had been living side by side with indigenous Azerbaijanis. A brutal war ensued, which lasted until a ceasefire in 1994.

Over the course of that war, Armenia occupied roughly 20 percent of Azerbaijan's territory, including the Nagorno-Karabakh region and seven surrounding districts. More than 30,000 ethnic Azerbaijanis were killed in the war, and around one million more people were internally displaced.

According to President Aliyev, in 2019, Armenia's leaders took non-constructive positions on the issue, coupled with a lack of international pressure, all of which affected negotiations.

Contradictory statements by Armenian officials made last year, including those by Prime Minister Nikol Pashinyan and Defense Minister David Tonoyan, were all but a commitment to political dialogue. Pashinyan fomented tensions with Baku by offering self-styled separatists in the occupied Nagorno-Karabakh region to be part of the negotiations and then called the region territory of Armenia. For his part, Defense Minister Tonoyan said at a meeting with the Armenian community in New York in March that the “territories in exchange for peace” formula should be replaced with “new war – new territories” paradigm.

“Throughout the year, Armenia's position has been toughened considerably. Several military provocations have been committed against Azerbaijan,” a former foreign minister of Azerbaijan, Tofig Zulfugarov, said according to Azinforum. “Among them was the death of a major and the death of a number of our soldiers by enemy snipers, which showed that the Armenian authorities aggravate the situation in both political and military terms. Their purpose is to exacerbate the situation and to provoke the Azerbaijani side to take action.”

“Everybody knows that unless the occupied lands are liberated, and hundreds of thousands of displaced people return to their homes, the tension between Armenia and Azerbaijan will continue and I would say that it will gradually increase.”

Zulfugarov said that an increase in tensions, as well as a resumption of military operations, over the next year is not entirely implausible.

“If you look at the Armenian propaganda, you will see that this propaganda especially focuses on military rhetoric, real and fictitious weapons. They are trying to create an image that as if they have grown militarily. They want to show that they are preparing for war, not for the negotiation process. They do not accept other options. They also understand that Azerbaijan will never agree with such a situation.”